VIRGINIA CITY: THE WILDEST TOWN IN THE WEST

Most of the time my posts focus on Wyoming, but today I thought we'd take a trip up north to Montana. When I started writing my first historical Western, Home Fires, I turned my sights to one of the first capitals of Montana and a boom-town that went bust, Virginia City. I think the reason for this was Virginia City was the last place I visited before moving from Montana to the East Coast. But enough rambling lets get into the good stuff.

Virginia City sprung from the Rocky Mountains in what was then Idaho Territory, and boomed like most gold towns.  In 1863, six men found gold in a natural bowl along Alder Gulch.  They tried to keep the find under their hats by traveling to Bannack, 60 miles southwest, for supplies, but they could not fool some sharp-eyed prospectors.  They returned to Alder Gulch with 200 new friends.  News spread like fire and before long the area was flooded with prospectors.

What is different about Virginia City is the gold was found during one of the most disruptive periods of American history, the Civil War.  The gold brought emigrants from around the world, but by an overwhelming majority Southern “rebels” outnumbered any other emigrant. These misplaced Confederates intended on naming the town “Verona,” a misspelling of “Varina,” Jefferson Davis’ wife. However, the miners’ court judge was a stubborn unionist, and would not submit the name. Those proposing a town charter hastened to explain the name was a compromise as Mrs. Davis was born in New Jersey. Not convinced, Judge Gaylord Bissell crossed out Varina and submitted Virginia.

The town remained a primarily Southern town. Disturbing to most Unionists, the camp was producing enough gold to win the war for whoever could secure the find!  This turned the eyes of President Lincoln square on the gold camp. Northern emigrants were encouraged to flood Virginia City to hold the gold for the North. As you can imagine, this didn’t go over too well with the current residents and Virginia City soon became one of the most lawless places in the West.


By 1864, 10,000 people were living in and around Virginia City, and Congress created the new Montana Territory (the intent, Lincoln could send his man to serve as territorial governor and keep the gold out of the South).  In 1865, Virginia City became the territorial capitol. Tents and shanties were replaced by permanent buildings and the town became home to Montana’s first public school, newspaper and telegraph and theater.  Virginia City and nearby Nevada City became the site of the richest placer gold strike in the Rocky Mountains, an estimated $30 million worth of gold being removed from the gulch.

As in all gold booms, few miners became rich. More businessmen benefited from the gulch. But the men who benefited the most were those who planned to gain their riches the old fashioned way…steal it. Robbers and thieves haunted the roads preying on miners, freight haulers and stagecoaches.  With the rise of bandits came the birth of an even deadlier group, vigilantes.  Lynchings became a daily event. Today, historians ponder who the real criminals were in an area fraught with extreme lawlessness and violence?

With all booms there comes a bust, and Virginia City no sooner boomed when things started to fall apart. Miners started moving to a new find near Helena (which would become the capitol of Montana), and by 1870 Virginia City’s population was reduced to few hundred.  Dredge mining continued in the area until World War II when all mining, except for a few hobbyists, ceased in the Gulch.

All was not lost, and Virginia City remains the most preserved ghost town in the West.  Visitors can step back in time, visit the Wells Fargo, see a melodrama at the Opera House, ride a train, visit Boot Hill, or ride south out of town a piece and into the mountains.

Writing this brings back memories of my visit to Virginia City and of HOME FIRES. Cord and Olivia's story will always hold a special place in my heart.

Cord Matthews sets his sights on the open Montana Territory when the War Between the States rips everything from him. Olivia Bartlett, the only woman he's ever loved, has been killed--a cross marks the place where she lies buried. Cord builds a new dream, but a ghost from his past won’t let him forget what his heart wanted most.Olivia, forced to flee her Virginia home, finds new purpose as a nurse to the wounded at Fort Laramie, Wyoming Territory. War and separation haven’t diminished her love for Cord Matthews, or her stubborn belief that he is coming for her. Danger threatens once more with the impending arrival of a new commander at Fort Laramie--a man who has already tried to kill her once. Olivia flees to Montana Territory, seeking refuge.Reunited on the Montana frontier, can Cord and Olivia hold tight to their love and defeat the man who seeks to destroy them both? 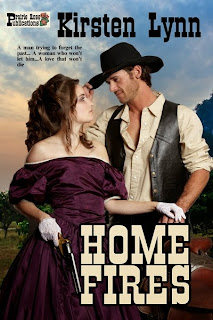 Kirsten Lynn is a Western and Military Historian. She worked six years with a Navy non-profit and continues to contract with the Marine Corps History Division for certain projects. Making her home where her roots were sewn in Wyoming, Kirsten also works as a local historian. She loves to use the history she has learned and add it to a great love story. She writes stories about men of uncommon valor…women with undaunted courage…love of unwavering devotion …and romance with unending sizzle. When she’s not writing, she finds inspiration in day trips through the Bighorn Mountains, binge reading and watching sappy old movies, or sappy new movies. Housework can always wait.
Posted by Kirsten Lynn at 5/06/2017