My Lands Are Where My Dead Lie Buried

By Paisley Kirkpatrick
---The government promised many things, the one promise they did keep is that they took everything---
Crazy Horse, a Native American war leader of the Oglala Lakota, resisted being photographed and was deliberately buried where his grave would not be found. He reportedly said, "My lands are where my dead lie buried." His extended hand on the monument is to symbolize that statement." 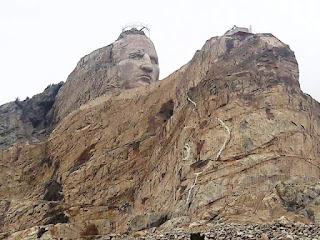 Elaine Quiver, a descendant of one of Crazy Horse's aunts, said: "They don't respect our culture because we didn't give permission for someone to carve the sacred Black Hills where our burial grounds are. They were there for us to enjoy and they were there for us to pray. But it wasn't meant to be carved into images, which is very wrong for all of us. The more I think about it, the more it's a desecration of our Indian culture. Not just Crazy Horse, but all of us."
The Crazy Horse Memorial is a mountain monument under construction on privately held land in the Black Hills, Custer County, South Dakota, USA. It will depict the Oglala Lakota warrior, Crazy Horse, riding a horse and pointing to the land where his people were buried. The memorial was commissioned by Henry Standing Bear, a Lakota elder, to be sculpted by Korczak Ziolkowski. It's operated by the Crazy Horse Memorial Foundation, a nonprofit organization.
The monument has been in progress since 1948 and is far from completion. If completed, it may become the world's largest sculpture as well as the first non-religious statue to hold this record since 1967. The monument is being carved out of Thunderhead Mountain, on land considered sacred by some Oglala Lakota. The sculpture's final dimensions are planned to be 641 feet wide and 563 feet high. The head of Crazy Horse will be 87 feet high; by comparison, the heads of the four U.S. Presidents at Mount Rushmore are each 60 feet high.
The memorial is to be the centerpiece of an educational/cultural center, to include a satellite campus of the University of South Dakota. 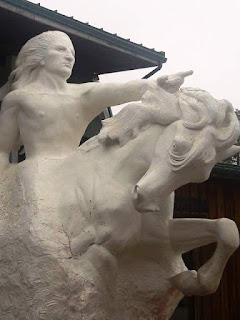 Plaster replica of finished memorial that is 1/34 the size.
Posted by Paisley Kirkpatrick at 5/02/2017