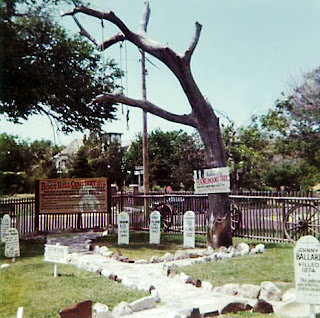 Often the name Boot Hill is associated with a cemetery in Dodge City, Kansas due to the town’s recognizable history made more notable by the Gunsmoke radio and TV series. However, there are/were many cemeteries named Boot Hill throughout the old west, with the most notable located in Tombstone, Arizona due to famous gunfight. That particular Boot Hill Cemetery was closed five years after the gunfight at the O.K. (Old Kindersley Livery) Corral and became known simply as the old city cemetery which was grossly neglected for years. (The gun fight actually took place in an empty lot six buildings away from the livery, but a 1950 movie set it at the corral so despite accuracy, the corral became marked as the location.)

These graveyards were spelled either Boothill or Boot Hill, but ultimately had the same meaning—most of the ‘occupants’ had died with their boots and usually violently whether in gun fights, hangings, or some other rough and unnatural death. 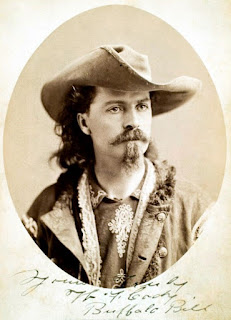 So who had the first Boot Hill? That was Hays, Kansas.  Fort Hays was established in 1867, the same year the Kansas Pacific Railroad planned to lay tracks through central Kansas. William F. Cody, (Buffalo Bill Cody) was a buffalo hunter for the railroad. An enterprising man, Cody partnered with another man named William Rose and founded the settlement of Rome, which quickly grew because of the railroad depot that was promised to arrive soon. A third man wanted in on the deal of creating the settlement, but Cody and Rose refused Webb’s involvement. Unknown to them, Webb had authority from the railroad to established towns for them.

Webb set the roots of his town, Hays City, a mile east of Rome and on the other side of Big Creek. Trying to hold onto their town, Cody and Rose gave away lots in Rome, but even that failed. Within a year, there was nothing left of Rome and Hays was a bustling city. If they’d built a building in Rome, people moved the entire structure to Hays, including a hotel and general store. By the time the railroad arrived in Hays rather than Rome, over a thousand people lived in Hays. Until five years later, when the railroad built a line to Dodge City, Hays was the point for people from the west and southwest to obtain supplies.

Hays never became a major cattle market landmark, but did have its heyday. Being an outfitting station for wagon trains following the Smoky Hill Trail, and a railhead, brought people to town in groves, including notorious characters. Structures appeared overnight, and by the dozens. At the first County Commissioners meeting, thirty-seven licenses to sell liquor were granted. 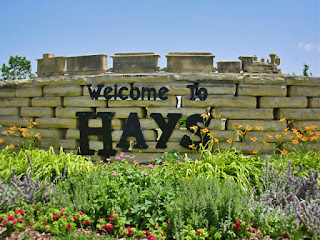 Despite the trials of some to make Hays a reputable community, it soon became one of the deadliest places in the West. Saloons and brothels flourished and the sheer number of desperadoes who placed very little value on human lives marred Hays City’s early days with bloodshed.

Wild Bill Hickock was hired as a ‘Special Marshal’. The law-abiding town’s people thought Hickock’s reputation of getting the ‘drop’ on his opponents and his deadly aim would protect them from the outlaws overtaking their community. However, Hickock walked his own line, which could be on whatever side of the law he chose at that moment. After he’d killed two soldiers, two civilians, and wounded several others, Hickock, evading military authorities, fled town.

Many other unsavory characters spent time in Hays, creating mayhem and stepping over dead bodies as they sauntered onward without remorse. The cemetery on the edge of town grew as quickly as the town. Bodies were often buried without ceremony, and considering 45 men were buried with their boots on within the town’s early days, the graveyard was named Boot Hill.

Many of the enterprising entrepreneurs who’d set up shop in Hays moved on when the railroad expanded. Dodge City inherited many of them along with the cattle drives. Several fires that destroyed entire city blocks calmed some of the rough and wild days of Hays, and the arrival of German settlers also contributed to the change in the city. The Germans were from Russia and brought along winter wheat that flourished in the area. Grain elevators and churches were erected and soon outnumbered the saloons and brothels, making Hays a welcoming community for farmers and families.

A new cemetery was created, and Boot Hill became nothing more than on overgrown piece of property that wasn’t renowned until Old Fort Hays was turned into a museum in the 1950’s. 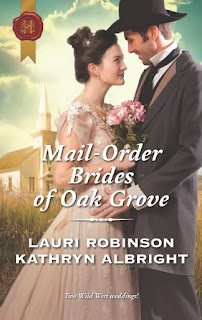 My June release takes place in Kansas, in a small fictional town of Oak Grove located along the Smoky Hill River. The Mail Order Brides of Oak Grove is a duet that includes two separate stories of twin sisters Mary and Margaret McCary. It’s also the first in a series of Mail Order Brides who find their happily ever after in Oak Grove.

Twin sisters say "I do" in the Wild West!

SURPRISE BRIDE FOR THE COWBOY by Lauri Robinson
Mary McCary never wanted to be a mail-order bride, but falling off the Oak Grove train into Steve Putnam's lap changes everything… Could he be the cowboy to tempt her down the aisle?

TAMING THE RUNAWAY BRIDE by Kathryn Albright
Running from trouble, Maggie McCary signs up to be a mail-order bride. She doesn't intend to actually marry…until she shares one sensational kiss with Jackson Miller!
Posted by Lauri at 5/24/2017