SUSANNA DICKINSON, SURVIVOR OF THE ALAMO

Susanna Wilkerson Dickinson (also spelled Dickerson), survivor of the Alamo, was born about 1814 in Tennessee, perhaps in Williamson County. Her first name has also been recorded as Susan, Susana, and Suzanna. Her maiden name is sometimes given as Wilkinson. She could neither read nor write but gave oral accounts of what had transpired at the Alamo.

According to Don Blevins, author of FROM ANGELS TO HELLCATS, Almaron (Almeron) Dickinson  attempted to court Susanna but was rejected. He turned to her friend, who accepted Almaron’s proposal and asked Susanna to be a bridesmaid. When Almaron called on Susanna to take her to the home of his fiancée to stay until the wedding, something momentous occurred. Instead of going to the home of his fiancée, they stopped at the county clerk’s office in Bolivar, Hardeman County, Tennessee where they got a marriage license. They were wed there by a justice of the peace on May 24, 1829.
Almaron was fourteen years older than Susanna. He was adept in many fields, including blacksmith, ferrier, veterinarian of sorts, and dentist. Imagine having the ferrier pull your tooth! The Dickinsons arrived at Gonzales, Texas, on February 20, 1831 after a trip by schooner from New Orleans. They traveled in company with fifty-four other settlers in the Green DeWitt Colony. On May 5 Dickinson received a league of land from DeWitt on the San Marcos River in what became Caldwell County but he and Susanna didn’t settle there. He received ten more lots in and around Gonzales in 1833 and 1834. The Dickinsons lived on a lot just above Gonzales on the San Marcos River, where Susanna took in at least one boarder. A map of Gonzales in 1836 shows a Dickinson and Kimble hat factory in Gonzales.
Susanna and Almaron's only child, Angelina Elizabeth Dickinson, was born on December 14, 1834. Susanna and her daughter may have joined other families hiding in the timber along the Guadalupe River in early October 1835, when Mexican troops from San Antonio demanded the return of an old cannon lent to Gonzales four years earlier. The resulting skirmish, the battle of Gonzales, was the first fight of the Texas Revolution.
Susanna said goodbye to her husband on October 13 when the volunteers left for San Antonio under command of Stephen F. Austin. She remained in Gonzales through November, when newly arriving troops looted her home. She joined Almaron in San Antonio, probably in December 1835, and lodged in the home of Almaron’s Masonic friend Ramón Músquiz. Músquiz was once political chief of Bexar, which later became San Antonio, and still had a great deal of influence. Susanna opened the home to boarders and did laundry. Davy Crockett was one of her boarders.

On February 23, 1836, the family moved into the Alamo because Almaron thought the family would be safer there. What a terrible decision for Susanna and Angelina! During the battle, Colonel William Travis took off his cat’s eye ring (a gift from his betrothed, Rebecca Cummings). After threading a string through the ring, he tied it around Angelina’s neck. This ring is now in the Alamo Museum, courtesy of Douglas McGregor, who had inherited it.

After the battle of the Alamo on March 6, Mexican soldiers found Susanna—some accounts say in the powder magazine, others in a small room of the church—and took her and Angelina, along with the other women and children, to Músquiz's home. Don Blevins asserts that Señora Músquiz asked Santa Anna to spare her friend Susanna. Santa Anna declared he “had not declared war on women and children”. Some accounts say the women were later interviewed by Santa Anna, who gave each a blanket and two dollars in silver before releasing them. Santa Anna was so enchanted by Angelina that he offered to adopt her and take her to Mexico and give her a good education. Susanna declined the man who had killed her husband and his comrades.

Santa Anna sent Susanna and her daughter, accompanied by a servant named Ben, to Sam Houston with a letter of warning dated March 7. On the way, the pair met Joe, William B. Travis’s slave, who had been freed by Santa Anna. The party was rescued by Erastus “Deaf” Smith and Henry Wax Karnes. Smith guided them to Sam Houston in Gonzales, where they arrived after dark about March 12.
Susanna Dickinson probably followed the army eastward in company with the other Gonzales women. Illiterate, without family, and only twenty-two years old, she petitioned the government meeting at Columbia in October 1836 for a donation. The proposed $500 was not awarded because politicians feared doing so would open the way for claims from other war widows.
By June 1837 she was cohabiting with John Williams, whom she married about November 27, 1837. He beat her and Angelina, and she petitioned in Harrisburg (later Harris) County for a divorce. The decree was granted on March 24, 1838—one of the first divorces in the county.
By 1839 Almeron Dickinson's heirs had received rights to 2,560 acres for his military service. They sold the land when Angelina reached twenty-one. Subsequent requests to the state legislature in November 1849 were turned down.
Susanna tried matrimony three more times before settling into a stable relationship. She wed Francis P. Herring on December 20, 1838, in Houston. Herring, formerly from Georgia, had come to Texas after October 20, 1837. He died on September 15, 1843. On December 15, 1847, Susanna married Pennsylvania drayman Peter Bellows (also known as Bellis or Belles) before an Episcopalian minister. In 1850 the couple had sixteen-year-old Angelina living with them. But by 1854 Susanna had left Bellows, who charged her with adultery and desertion when he filed for divorce in 1857. Susanna received praise from the Baptist minister Rufus C. Burleson for her work nursing cholera victims in Houston, where he baptized her in Buffalo Bayou in 1849.

Susanna left Houston in 1857 for Lockhart, a small community near Austin in Caldwell County. This move gave her the opportunity to get away from the troubles and bad reputation she had endured and put them behind her. In Lockhart, she established a reputable boarding house.
Not long afterwards, she married Joseph William Hanning, who was sixteen years younger than she. Hannig (or Hannag), was a native of Germany. He was honest, a hard worker, and a shrewd businessman. 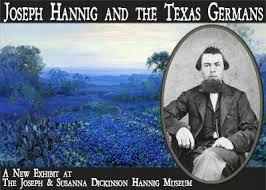 Susanna sold her land holdings to help Joseph set up a cabinet shop in Austin. The couple moved to a small, plain house on what is now Fifth Street. While in Austin, the Hannigs invested wisely in land, flour mills, a furniture store, and even ran a mortgage operation for a while. They joined the social life of the burgeoning city.
In the late 1870s the Hannigs built a two-story frame home at what is now Duval and Thirty-Second Streets in Austin. Finally, Susanna was financially secure with a loving husband. The bleak spot in her life was the death of Angelina on July 13, 1869 at the age of thirty-five.
Susanna became ill in February 1883 and died on October 7 of that year from what was listed as hemorrhage of the bowels. Was it cancer, an ulcer, or something else? Hannig buried her in Oakwood Cemetery. Even though he married again, he was buried as he requested next to Susanna after his death in 1890. He had placed on her grave a marble marker that said "Sacred to the Memory of Susan A. Wife of J. W. Hannig Died Oct. 7, 1883 Aged 68 Years". The state of Texas added a marble slab above their graves on March 2, 1949. A cenotaph honoring Susanna Wilkerson Dickinson was placed in the Texas State Cemetery in Austin, Texas.

The house her fifth husband Joseph William Hannig built in Austin, Texas in 1869 became a museum, The Joseph and Susanna Dickinson Hannig Museum, dedicated to Susanna Dickinson and the other Alamo survivors.
Susanna Dickinson's witness accounts
·        There were very few casualties before the final assault. She didn't know the number.
·        She confirmed the legendary "line in the sand" incident, where Col. William Travis gave defenders the choice of staying or leaving, did happen. However, she said that it happened the day before the final assault, when it is believed to have happened on either March 3 or March 4.
·        On the morning of the assault, her husband ran into where she'd hidden, made his final statements to her and revealed that the Mexicans were inside, then returned to his duty. She never saw him again, nor did she ever see his body.
·        She hid inside the chapel, and did not see the actual battle. One defender ran inside during the battle, attempting to hide, but was killed by Mexican soldiers.
·        When she was discovered, a Mexican officer intervened. She believed he was a British mercenary named either Black or Almonte. He actually was Col. Juan Nepomuceno Almonte, who spoke perfect English, having been educated in New Orleans, Louisiana.
·        Outside there was a single survivor, found hiding, who unsuccessfully begged for mercy and was killed. Joe also reported this, claiming the man's name was Warner. However no Warner is listed as being at the Alamo. The most similar name is Henry Warnell, who departed the Alamo as a courier, probably on February 28, 1836, and died in Port Lavaca, Texas, of wounds received either during the battle or his escape in June, 1836.
·        She saw the body of Davy Crockett between the chapel and the barracks building.
·        She saw the body of Jim Bowie with two dead Mexican soldiers lying beside him.
·        She was taken to a house where she'd previously lived, and from there could see the pyres of the dead being burned.
·        The next day she was taken before Santa Anna, and Almonte, or Black, convinced Santa Anna to release her rather than imprison her.
·        She was sent east with Joe, and on the way to Gonzales, Texas, she was intercepted by a party including Deaf Smith.
·        At some point after the battle, she had no recollections, only that she wept for days.
Other survivors, including Enrique Esparza (the son of Alamo defender Gregorio Esparza) confirmed some of Dickinson's account.
One account says that since Mrs. Dickinson was an intelligent and well spoken woman, Santa Anna had her identify all the bodies of all the commanders and main players, including her husband. Other accounts say the bodies were being piled on already burning pyres when she left the chapel and she didn’t see her husband’s body. When she asked to see it, Santa Anna told her the body had already burned. 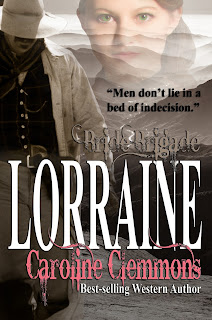 Lorraine Stuart escapes marriage to an odious man by leaving the state. She joins with six other young women going to Tarnation, Texas. Grant Pettigrew sets her heart aflutter but he is infuriatingly stubborn.

Like Caroline’s Amazon page here and be alerted when she has a new release.

Sign up for her newsletter here and receive a free novella, HAPPY IS THE BRIDE plus find out about new releases, contests, and other fun stuff.