I don't know how I chanced upon this topic—"Sand Pounders." But, it intrigued me. I couldn't imagine what the term referred to until I read the article. Then it all made sense, and I thought what a great topic for a blog post or for a novel.

"On Feb. 3, 1941, all coastal areas of the United States were organized into defense divisions known as Naval Coastal Frontiers. Then on Nov. 1, 1941, under Executive Order No. 8929, the Coast Guard was transferred to the Navy for the duration of what would soon become, for the U.S., World War II." 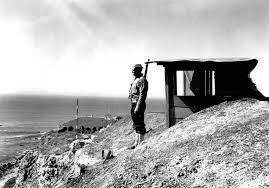 The Army handled land defense, the Navy would handle the offshore patrols, and the Coast Guard would handle beach patrol.

They had had three basic functions:

"*To detect and observe enemy vessels operating in coastal waters and to transmit information on these craft to the appropriate Navy and Army commands;

*To report attempts of landings by the enemy and to assist in preventing landings;

*Prevent communication between persons on shore and the enemy at sea."

In the first months of the war, patrols were handled much as they were during peacetime—one man armed with flares.

Warnings about enemy landings from the FBI were issued, but weren't taken seriously.  One incident in June of 1942 changed the Coast Guard's thinking. On June 13, 1942 the U-202 surfaced off the coast of Long Island, N.Y. Four Nazi agents came ashore in a rubber raft with the intention of striking  key U.S. factories and railroads. They changed from their uniforms into civilian clothing.

While making his six-mile patrol, 21 year-old John Cullen, Seaman 2nd Class saw someone walk out of the fog. He ordered the man to identify himself, the stranger said he was George Davis and that their fishing boat had run aground. Cullen could see the other agents dimly in the fog. One called out something in a foreign language. Suspicious, Cullen suggested they accompany him to the Coast Guard station. Davis then offered Cullen $300 to forget he'd seen anything.

At the station, Boatswain's Mate Carl R. Jenette listened incredulously to the story. They returned to the scene to find the agents were gone, but they could smell diesel oil offshore and hear the throbbing of an engine. The U-202 was trying to free itself. They could also see a blinker light. They hid behind a dune to prevent being shelled.

The next morning they returned to find to find buried explosives and incendiary devices.

The beach patrol served as a coastal information system. 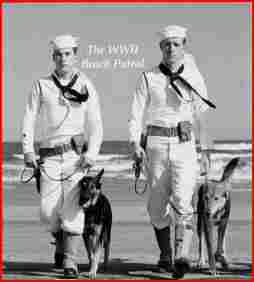 Certain area of the beach were dangerous to walk so boat and motor patrols were established. Foot patrols required men to travel in pairs. They carried rifles, or sidearms and flare pistols. Distances covered were usually two miles or less as they had to report in by telephone boxes placed three quarter miles apart.

In 1942, dogs were added to beach patrols. Their keen sense of smell and ability to guard made them valuable additions. The dogs were fitted with canvas boots to protect their paws from sea coral and seashells.

When the dogs came into use, the two man teams were replaced with canine patrols. The length of their patrol was about a mile. The dogs saved their handlers lives on numerous occasions. One guardsman almost walked off a cliff, another passed out. His dog ran for help and 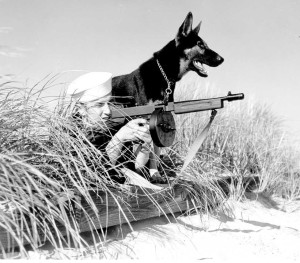 saved him from hypothermia.

By late 1942, horses began to arrive. "... recruits were drawn largely from the Midwest and from east of the Cascades—horse country." Oregon beaches were not easy to cover by walking.

"Pairs of Coast Guard guys, both packing .38 revolvers and Raising M50 submachine guns, usually mounted, one with a backpack radio transmitter — doggedly making their way along the beach in the teeth of every kind of weather the Oregon Coast can supply, eyes peeled for any sign of Japanese marauders." 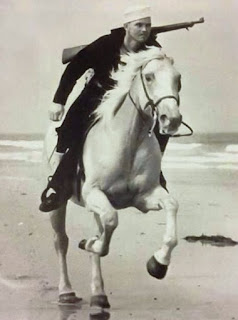 As to the Sand Pounders success, it's hard to say. Though they never stopped an invasion, the people of Oregon were comforted by their presence as people in others areas of the U.S. were also.

"But, it's possible that the Sand Pounders had won their fight before they even suited up." The incident mentioned earlier about the Nazi saboteurs on Long Island, their capture and convictions must have sent a loud message back to the Axis Powers. "...the American home front was not going to be an easy target."

There are many articles on the Internet about the Sand Pounders. I could only report on a small portion of their activities here.

Thank you for stopping by Sweethearts of the West. If you're not following us, please do. We have interesting posts every two days. Most of them are on the old west, though some of us vary off subject from time to time.