I am fascinated by strange or unusual places, occurrences and historical mysteries, as well as untapped powers of the human mind. That’s why I feature psychic characters in my novels and why I love reading about mythology and legends. It’s no surprise then, that when I spotted a book titled Weird Texas while browsing a local Buc-ee’s (a huge gas station, food stop and souvenir hunter’s paradise) I had to have it. 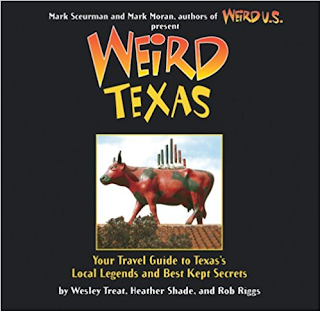 This book is a treasure trove of spooky tales and oddities from the Lone Star State, including some ancient not-so-natural sites. One is “Enchanted Rock,” a pink granite dome more than one billion years old. Encompassing 640 acres in the Hill Country of central Texas, some twenty miles north of Fredericksburg, the rock reaches 400 feet above the surrounding land. The huge batholith (an igneous rock formation exposed by erosion) is the second largest in the United States, the first being Stone Mountain in Georgia. It’s also one of the oldest in the world. 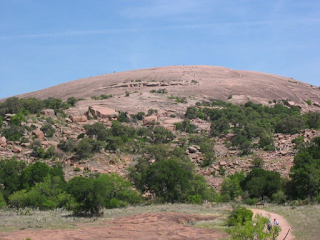 The name Enchanted Rock stems from Native American beliefs that it is haunted, so the story goes. Both the Tonkawa and Comanche feared and revered the rock, possibly offering sacrifices at its base. The Apache believed it was inhabited by mountain spirits. Since many Indians avoided the rock, white settlers sometimes sought refuge there from raiding parties.

One legend says the rock is haunted by a band of warriors who fought to the death against enemy attackers. Their wailing spirits supposedly wander over the rock. Modern scientists suggest the Indians saw how the rock glitters at night after a heavy rain and thought the glittering lights were spirits. Likewise, they mistook the creaking sounds the rock makes when the surface chills after a warm day, for ghostly wails.

The book's authors say, "Such theories do not credit the Indians with having much sense, and assume that they were a superstitious bunch, ignorant in the ways of nature. Much of this attitude may result from our own ignorance of the forces of nature, of which the Indians were very much aware."

Members of the Weird Texas team have camped near Enchanted Rock and other granite rocks in the area. They report hearing strange noises coming from the giant rock, particularly during solstices, that sound like the hum of a high-voltage power line, even though there are such lines anywhere near. The authors speculate that the lights and sounds come from energy within the granite, and go on to say shamanistic cultures have long held such sites sacred.

This is just a small taste of the interesting legends -- and facts -- I found in this thoroughly entertaining book. If you'd like to add it to your library, it's available on  Amazon. https://www.amazon.com/Weird-Texas-Travel-Legends-Secrets/dp/1402766874