MARRIAGE WHEN THE PREACHER WASN'T AVAILABLE!

The last post by Paty Jager on frontier preachers reminded me that in the West, a preacher was not always available. In my own ancestry, my great-great-grandfather was a Methodist circuit preacher until he built a chapel next to his home in South Carolina. This fosters the question of what did couples do when there was no preacher around?

In genealogy, researchers will come across the term “marriage bond” but this was not a marriage. Think of a marriage bond as an intention to marry. A man who proposed to a woman went to the courthouse and posted a bond indicating his intention to marry the woman. If he then failed to marry, he forfeited the bond. The bondsman was often a brother, uncle, or father of the bride.

By contrast, “marriage by bond” was when there was no minister available to perform the marriage ceremony. In some remote areas, months—possibly years—went by without a minister coming through town. In this case, the couple chose to be “married” by bond.

They would file with local authorities a document that included their wedding vows, their agreement, and the amount of money they would mutually bind themselves to pay should they not have the marriage validated by a competent authority as soon as the opportunity arose. The amount of money posted as bond would vary with the couple and area. It could be as low as fifty dollars and as high as several thousand. I wonder how the money was collected if the groom just headed for distant lands. Surely the bride did not have to pay the groom's share.

Be it known that we, John Smith and Mary Jones, are of lawful age of (county or Territory), wishing to unite ourselves in the bonds of matrimony and there being no priest or minister to celebrate same. Therefore I, John Smith, do agree and do hereby take Mary Jones to be my legal and lawful wife and as such to cherish, support and protect her, forsaking all others and keeping myself true and faithful to her alone. And I, Mary Jones, do hereby take John Smith to be my legal and lawful husband and as such to love, honor and obey him, forsaking all others and keeping myself true and faithful to him alone. We mutually bind ourselves to each other in the sum of one thousand dollars to have our marriage celebrated by a priest or minister authorized to do the same whenever the opportunity offers, all of which we promise in the name of God and in the presence of Harry Brown, (Title) of (County or Territory) and other witnesses present whereof we have hereunto set our hands this 1st day of September, 1859.

Can you visualize a small community in the back of nowhere after the arrival of a traveling preacher and him standing before several couples—and their children? 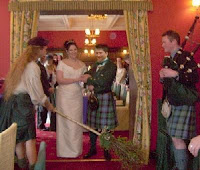 Jumping the broom began in Wales, Scotland and England. It may have referred to the broom plant as well as an actual broom. As such, it referred to a marriage that was not viewed as legitimate. This could be because the couple eloped without having their banns read three times, the bride was underage, or another societal reason rather than actual legality. It is still performed at the end of some ceremonies or a person sweeps a broom in front of the couple as they leave their wedding. 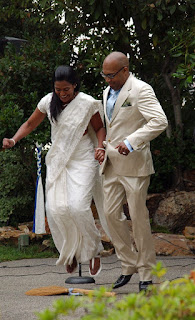 Jumping the broom  was used by slaves before the Civil War. Slaves were denied legal marriage because a civil contract required the consent of free persons. The slave community developed its own methods of distinguishing between committed and casual unions. The ceremonial jumping of the broom was always done before witnesses and signified that a couple chose to become married as allowed.

Jumping the broom fell out of practice after the Civil War when freed slaves could marry legally. The practice made a resurgence after the publication of Alex Haley’s ROOTS, and particularly after the book became a movie. Many African American weddings end with jumping the broom as a testimony to heritage. 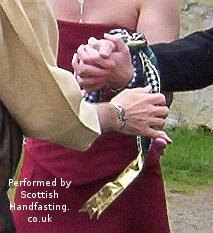 Handfasting is an ancient practice that is no longer recognized as legal. Handfasting probably comes from Scandinavian Christian and pre-Christian practices introduced to Scotland before 1000 AD and was still popular in the 1500-1600s. It was a form of betrothal. Some historians have interpreted this as a trial marriage of a year and a day. In some places in the Scottish borders, it may have been.
In Handfasting, the hands were bound by the bann (ribbon or chord), rather than by rings. Under old Cannon Law, public figures other than priests would sometimes perform the wedding: Blacksmiths (as in Gretna Green), clan chiefs, other prominent public figures. It was the vows before the family that made the marriage legal, not the person officiating. The law changed in the 1600s, allowing only church ministers to perform marriage. The practice of binding the hands had become so popular that some Scottish churches still use handfasting as part of the wedding ceremony.
There were several types of handfast throughout Great Britain, depending on the area/country. By the 18th century, the church of Scotland no longer recognized marriages formed by mutual consent with subsequent sexual intercourse, even though the Scottish civil authorities did. To minimize any resulting legal actions, the handfasting ceremony was to be performed in public. This situation persisted until 1939, when Scottish marriage laws were reformed by the Marriage Act of 1939 and handfasting was no longer recognized as legal and binding. Some couples still include handfasting as a part of their legal wedding.
The custom has been adopted by those who practice Wicca.
Sources:
https://en.wikipedia.org/wiki/History_of_marriage_in_Great_Britain_and_Ireland
http://history.brazoriaresearch.com/2015/06/21/marriage-banns-marriage-bonds-and by Ronald Howard Livingston
Photos from iStock and Wikipedia commons 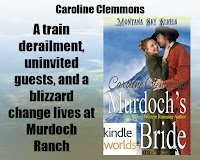 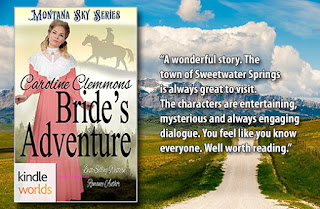 Amazon bestselling and award winning author Caroline Clemmons’ latest publications are BRIDE’S ADVENTURE and MURDOCH’S BRIDE, linked but stand-alone books in Debra Holland’s Kindle World Montana Sky Series. Click on the title in the sentence above to purchase the book. MURDOCH'S BRIDE is on sale for $ .99 through April 30 and BRIDE'S ADVENTURE is only $1.99, both true bargains!