THE RICHEST WOMAN IN AMERICA

Marjorie Merriweather Post was one of America's earliest and most famous heiresses, socialites and philanthropists. As the founder of General Foods in Battle Creek, Michigan, she became the wealthiest woman in the United States. Her fortune amounted to about $250 million.
(Born March 15, 1887-Died September 12, 1973) 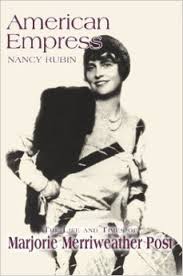 Her story goes back to her father, C. W. Post, who was founder of a small West Texas town named for him—Post, Texas near Lubbock. He established the Postum Cereal Company in 1895 in Battle Creek, Michigan. When he died, Marjorie became the owner of the rapidly growing Postum Cereal Company. Eventually the company came to be known as General Foods.

She married four times:
1. Investment banker Edward Bennett Close of Greenwich, Connecticut, and had one daughter, Adelaide.
2. Financier Edward Francis Hutton. They had one daughter, Nedenia Marjorie Hutton, better known as actress Dina Merrill.
3. Joseph, E. Davies, a Washington, DC attorney.
4. Herbert A. May, a wealthy Pittsburgh businessman.
After that marriage, she returned to her original name: Marjorie Merriweather Post.

RUSSIAN ART: Marjorie collected an extensive amount of art while married to Joseph Davies. A large portion of the collection came from art treasures seized from the Romanov family and former Russian aristocrats after the Russian revolution. Although critics suggested the art was expropriated, Post and Davies’s transactions were from the recognized governmental authority. The items remain under the control of the Post estate and can be viewed at her Washington, DC estate called Hillwood.
In addition to the Russian art, the estate holds her French art collection, featuring the work of Faberge, Sevres porcelain, French furniture, tapestries, and paintings.

ESTATES:
Mar-A-Lago on Palm Beach Island: Designed by Joseph Urban, Mar-A-Lago was willed in 1973 to the U.S. Government as a retreat for Presidents and visiting foreign dignitaries. The mansion was not, however, used for this purpose, prior to being declared a National Historic Landmark in 1980. It was purchased by Donald Trump in 1985.
She also owned numerous other estates across the US.
At one time, she owned the largest privately owned sea-going yacht in the world. 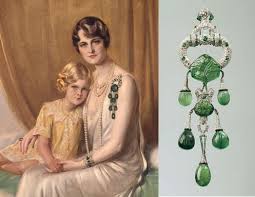 JEWELRY: Of course, since she often dressed as royalty, she owned a large amount of priceless jewelry. Some of the collection is on display in the Smithsonian in Washington, DC: the Napoleon Necklace; the Marie Louise Diadem that Napoleon gave to his second wife; earrings that belonged to Marie Antoinette; and diamonds and emerald necklaces and rings that belonged to Mexican Emperor Maximilian.

PHILANTHROPY: Marjorie was generous with her donations. She built a hospital in France during WWI, gave to universities, the Boy Scouts, and concert pavilions.

EPILOGUE: Her wealth and position were made possible by her father, C.W. Post.

COMING NEXT MONTH: The accomplishments and tragic life of a unique man: C.W.Post


Thank you for visiting The Sweethearts of the West.


Celia Yeary-Romance...and a little bit 'o Texas
Amazon: https://www.amazon.com/author/celiayeary
My Website
My Blog
Sweethearts of the West-Blog
My Facebook Page