I'm Sandra Crowley, writer of contemporary romantic suspense. So, what am I doing as a member of this blog that specializes in The Wild West, The Old West, the just plain but still fascinating west? Well, I live in Colorado. My stories take place in various western states. John Wayne is my favorite actor. LOL OK, maybe that's hokey, but I don't care. I'm a half a bubble off plumb, and I like it that way. That's why my husband wasn't the least bit surprised when I bought three saloon/brothel tokens years ago. 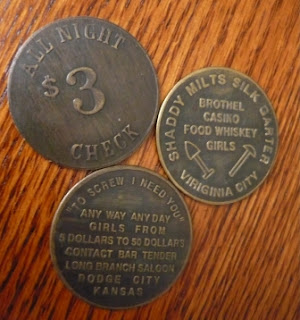 Experts say that beginning in the 1700s and lasting through the early 1900s, when prohibition halted legal activities at saloons, establishments in the western United States, through the Yukon territories, and into Alaska minted their own currencies known as saloon tokens. Born out of the barter system necessary within those raw lands these tokens are prized collectibles now. 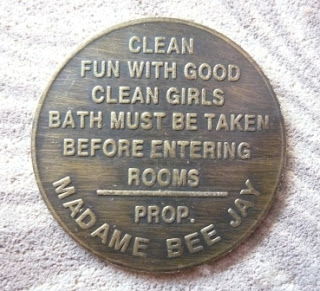 How could I afford three valuable "coins?" Well, my tokens belong in the fantasy, or reproduction classification. They're usually more explicit or bawdy in their claims. Prices for fantasy tokens offered on eBay run from a dollar or two up to ten. What they actually sell for is a good question. We keep ours as conversation pieces. They’re usually in our guest bathroom by the sink for the observant to discover and comment upon.
A real token would fetch a price somewhere in the hundreds or higher. Some have holes in the middle, are octagonal shaped, or even scalloped edged besides the mundane round my fake ones are. Most have a tender value listed: 12 ½ cents equaled one bit or the price of one drink. When a saloon patron paid real cash for his whiskey or “service”, the owner returned change in the form of the tokens he had made himself or had forged. This ensured the customer returned to his place of business since other establishments accepted only their privately minted “change.” Because of this non-monetary value, they are considered exonumia which also includes military medals, commemorative coins, and personal tokens like those used to identify group affiliations such as the Freemasons. 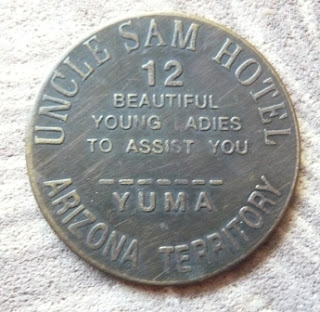 Why were saloon or brothel tokens needed in the Old West? Money couldn’t travel with the ease and speed of our current banking systems. Banks sent money on stage coaches or by Pony Express riders, time consuming adventures. As trains took their places, delivery became easier, quicker but still suffered delays and outright robbery that could cause disaster for a business owner caught without funds. Especially when increased westward travel of the poor and penniless further shortened circulation of money.
Another reason was that saloons and brothels clustered around mining camps. Mine owners hired workers, allowed them to buy supplies from the company owned stores, and then deducted those amounts from the miner’s wage. This system is called payment by scrip. Its popularity curtailed the flow of legal tender (dollars and cents) in mining communities. Some of you may remember one of my favorite songs, Sixteen Tons by Tennessee Ernie Ford. Its chorus describes this vicious circle. “You load sixteen tons, what do you get, Another day older and deeper in debt, Saint Peter don’t you call me ‘cause I can’t go, I owe my soul to the company store.” 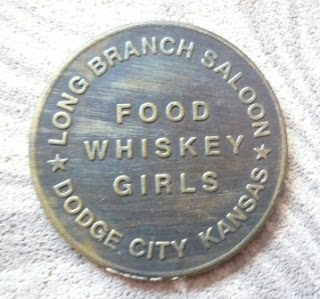 So, saloon and other business owners did what was necessary for their survival; they minted their own tokens for their customers to use in exchange for goods and services. That kept their money out of the control of the greedy mining companies.
I hope you enjoyed this glimpse into Old West economics. Happy Ridin'
Posted by Sandra Crowley at 2/24/2011