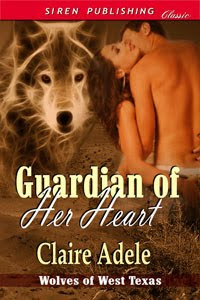 Guardian of Her Heart, by Claire Adele, released February 10

“Let’s sit in here while dinner cooks,” she said and led the way to the living room.
She settled in the middle of the couch and crossed her long legs. He welcomed the chance to sit next to her.
He cleared his throat. Later, Wolfson, if you’re very lucky. “Even though I don’t want to and I expect you don’t either, we need to talk about this guy and his goons who attacked you.” He wiped one hand over his eyes. “You’ll need better security at the shelter. I don’t like the thought of him showing up again.”
“I can’t afford another security guard at the shelter, but I’ll ask the one I have to walk with me to my car in the evening when I leave.” Her eyes revealed her trust in Mike. Her lips curved up in a warm smile.
He wished he could hold her heart-shaped face with his hands and kiss her freckled nose, her full lips. Feel those lips on him.
“Good. That’ll help, but until we catch those guys, you need to have someone follow you home. I’ll do that. Juan and Derek have been investigating this gang for over a year. If you’ll call the police to make a report about what happened tonight, it’ll help them build a case. The sooner we put these guys in jail, the better.”
She slowly snuggled up to Mike’s side. “I recognized the father of the boy as a troublemaker from our high school days. It’s been a while.”
“I remember him, too,” Mike said and urged Melissa closer to him. “In high school, he thought it was fun to pick on kids who were smaller or younger than he was. Now, he uses women to make money.”
Mike clenched his jaw. He should have taken Tito down tonight. He shouldn’t have let him get away.
She smoothed her soft fingers over his hand. “The little boy’s mother signed their last name as Gonzalez.”
“Yeah. Tito Gonzalez.” A rogue werewolf with a dangerous pack. “He owns an apartment building near downtown. He and his gang live there. The police have a detective checking out the place, but so far, from what I’ve heard, he hasn’t found any conclusive evidence to prove human trafficking. The apartment is handy for prostitution, under the guise of a massage parlor, as well as meetings with those looking for free illegal labor. Maybe the boy’s mother can give you some info that would help with the case.”
“I’ll see if she wants to talk about him, but I’m not going to badger her. She came to the shelter for rest and protection. I won’t cause her more distress.”
Mike smiled at the protective tone of Melissa’s voice. “I won’t ask you to. If she closes up, let it go. We’ll find some other way to arrest these guys.”
Anger and determination made his blood boil. The thought of Melissa being hurt by Tito and his gang tempted the dangerous side of Mike with the urge to tear their throats out.
Melissa was the most beautiful, generous woman he’d ever known. Her dark hair fell in waves around her delicate face. He pushed a tendril back as he gazed into her blue eyes.
Her familiar, sweet scent tempted the primal force raging through his veins. He must control it now and always. She would run from him if she knew he was more than human.
Claire Adele
Many werewolf stories take place in Canada or near the northern border of the USA. Of course, that makes sense because most North American wolves range in the northern states and in Canada. But what about the Mexican Gray wolf? Shown below, the Mexican wolf is being returned to the states of Texas, New Mexico, and Arizona, where it roamed years ago before its numbers were depleted. With the help of the US Fish and Wildlife Service and Federal, State, and Tribal partners, the Mexican Gray wolf is making its way back. 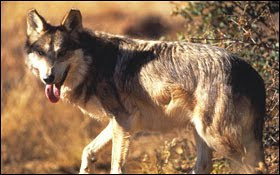 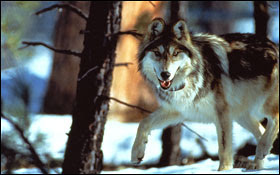 A few years ago, my husband and I drove along an unpaved road in the desert toward one of our favorite places to picnic. Crossing the road well ahead of us trotted a large reddish-brown canine, too large and of a different color than a German Shepherd dog. Late one night recently, I heard the howl of a wolf near our neighborhood home in the foothills. There are often sightings of mountain lions in our foothill neighborhoods, so it's not surprising that a wolf or two might be lurking as well. My hope is that they find good hunting in the mountains and desert outside the city. Their ancestors have ranged the entire length of the Americas in the past.

Check out http://www.fws.gov/southwest/es/mexicanwolf/indes.shtml
for more information, and additional photos of the Mexican Gray wolf.

Have you seen a wolf recently? If you have, was it roaming free?

I always give away a copy of one of my books to a member of my newsletter which you can sign up for on my web site at www.JeanmarieHamilton.com