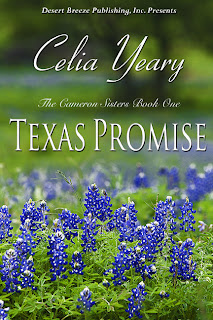 Years ago, I wrote a Western Historical Romance titled TEXAS BLUE. The heroine was Marilee Weston, a young woman who had a five-year-old daughter and lived in isolation in the East Texas Piney Woods. Her father had banished her...and she was trapped. There was no way out.
A tracker named Buck Cameron found her, and following the instructions he'd been given, he talked her into leaving with him and going to Nacogdoches to the west.
TEXAS BLUE was a finalist in The Romance Studio Best Historical of 2010, and received numerous glowing reviews.
Sometime later I wrote a sequel titled TEXAS PROMISE. This story is about Marilee and Buck's little daughter, Josephine, now grown-up and ready to tell her story.
An excerpt from TEXAS PROMISE, a Western Historical romance.
***********
As he sat and attempted to form some sort of resolution concerning how to get on with her without giving in to how he really felt, the subject of his thoughts swung up into her saddle and raced off down the street.

Dalton spurred into action. Almost toppling his chair over, he grabbed his hat, threw a coin on the table, and ran out the door. His limp slowed him some, but not so much that he couldn't move fast enough. All in one motion, he swung into the saddle and kicked his horse into a gallop. He caught her quickly, for his big stallion could outrace her gelding any day of the week. The first thing he noticed was the gun belt strapped around her hips, and the holster holding a Colt 44.

He reached out and grasped the bridle on her horse, and slowed him by force to match his own horse's gait. They came to a stop, and she viciously turned on him.

"You leave me alone!" she yelled. "Turn right around and go on back to where you came from! In fact, why don't you run away again? No, no, I'll run away this time. You can be the one left behind. I won't allow that to happen to me again. First, I was an abandoned bride, and then I was a lonely widow. Now, I'll be a... I'll be what I want to be. And, and--" Her tirade stopped, as though she'd run out of words or thoughts.

"Are you finished?" he asked quietly. "I'm not going to run away, as you put it."

"We're finished, Dalton. Things are so wrong and so bad between us that I can't even inquire about your health. That's my right as a dutiful wife, but you don't see me in the role of a loving, caring mate. You never have and you don't now. I can only believe that you never will."

The silence between them matched the silence of the wide-open spaces. Neither had any appropriate words to say. So, they sat on their horses, pointed in the same direction, but in reality, going in opposite ones.

Dalton felt a chill creep in his belly, and he tasted panic rising in his throat.
*****
BUY LINK: EPUB, HTML,LIT, PDF, PRC (OR go to KINDLE Store on Amazon.)