Anyone who reads western romance or westerns has heard of open range. There’s even a popular movie titled “Open Range,” starring Kevin Costner and Annette Benning. Exactly what is it and what changed it?

The essence of open range is free grazing on millions of acres of unfenced land. In United States history, the areas of public domain north of Texas, where from about 1866 to 1890 more than 5,000,000 cattle were driven to fatten and be shipped to slaughter, was open range. That’s right, that’s 5,000,000 cattle over 24 years. Imagine how that affected the landscape.

Men returning from the Civil War (1861-1865) found cattle had continued to breed and there were many unbranded cattle roaming on open range in Texas, Colorado, Wyoming, and other western states. Some men were able to found herds/ranches with the unbranded “mavericks.”

Because of open range policies, it was possible to become a wealthy cattleman without actually owning any land. Most owned at least a base for operation, however, and some owned millions of acres.

The open ranges of western Kansas, Nebraska, the Dakotas, Montana, Wyoming, and other western states and territories served as huge pasturelands for the herds of the Texas ranchmen. I’m from Texas, and I hate to see my state maligned, but facts are facts—and I haven’t even mentioned the Texas ticks that attached to Texas cattle and spread to infect cattle in other states through which they passed.

The trails went from western Texas northward, through Indian territory and into the vast stretches of public domain lands in the Central and Northern Great Plains. During the 24 years of open range cattle grazing, these areas were largely free of farmers or sheep.

In the 1880s, large amounts of British capital went to the United States for investment in open range ranching. Foreign enthusiasm infected American financiers and businessmen, who formed cattle companies to reap the big profits of raising beef for domestic consumption or overseas shipment. The U.S. cooperated by banning the fencing of lands on either the public domain or Indian reservations and awarding beef contracts to the cattle companies. Beef purchased by the government was distributed among the western Indians, who were left without a food supply when the buffalo herds were destroyed.

The cattlemen sometimes joined together and made up vast herds, sometimes numbering 5,000 with a small crew of cowboys. For instance, a herd of 2,000 required only 10 cowboys. (More than are shown in western movies.) Driving the cattle to market in Kansas was cheaper than shipping them by rail from Texas. Drovers used the Chisholm Trail, blazed by Jesse Chisholm, a Cherokee. The Chisholm Trail ran along the 98th meridian from deep in Texas to Caldwell, Kansas, then branched off to Abilene, and later Dodge. For a time, a steer which would sell for $2.00 in Texas would bring $20.00 in Kansas. Cowboys made $10 a month whether on the ranch or on a drive. You can understand how great fortunes were made.

"Chinook" by Charles M. Russell
The Great Die Off

The disastrously cold winter of 1886-87 called the Great Die Off meant the death knell of the open range cattle industry. (See my article on the Great Die Off https://sweetheartsofthewest.blogspot.com/2016/11/the-winter-that-changed-cattle-ranching.html?m=1 ) Many investors were ruined as hundreds of thousands of cattle perished in the thick snow and ice. As cattle ranching dwindled, farmers moved in and fenced their land. Although it flourished for only a few decades, open range's influence on the Armerican character and self-image continues to the present day 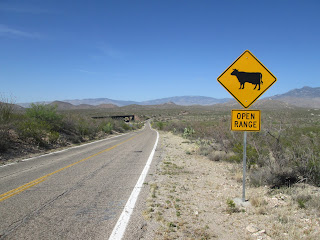 Open Range sign on
Arizona 2014
Areas of open range still exist. For instance in Arizona, cattle must be fenced in if in an incorporated area. In unincorporated areas, the cattle have the right of way. Many other states have similar laws. If a motorist hits a cow in an open range state, the driver must pay for the cow.

Next month, I’ll write on the barbed wire that fenced us in. I’ll leave you with this:

LONE STAR: A HISTORY OF TEXAS AND THE TEXANS, T. R. Fehrenbach, American Legacy Press, NY, 1983 edition, one of my favorite references..