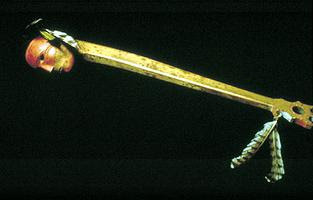 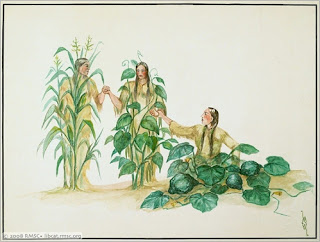 Even warriors must eat, and the farmers among the Iroquois Confederacy since ancient times (and a confederacy didn't exist) found that the staple crops above were powerful for the people. In a slightly different way, so was the Iroquois the war club.
But were all war clubs alike? No, the war club had been in use among the Iroquois nations for centuries and during that time, it was both personal and under development for others in the tribe. The war club  above is from 1709; the next war club was used in the middle 1800's.
Being horticulturists, the Iroquois fought more vehemently than other woodland tribes, because developing their sophisticated civilization had not been easy and they were unable to see why the colonists were disrupting their farms. 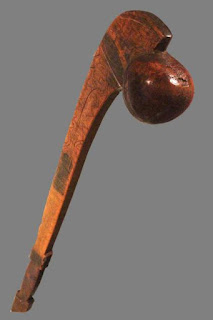 Here's a map of where the Iroquois Confederacy was (and is) located in New York.  This is where my Seneca heroine, Ta-lisha spent her childhood. 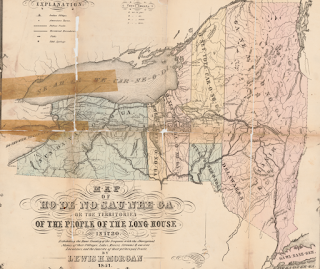 She reached her adult years, though, in Dakota Territory among the once-nomadic Lakota.  Similar to the Senecas in New York, the Plains Indians underwent huge transitions.  Ta-lisha and Jake, the White settler she was later involved with, had a steadying influence on each other despite the times.
Though Seneca were renowned for their education and diplomacy, their war clubs appear to be unusually  vicious. Below, please find three of them. 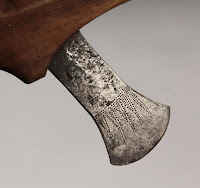 Directly above, a tatooed Iroquois war club
The clothing was different from what the Plains Indians wore, before and after the Reservation Era. It was also made by hand by the Seneca women. Here's one example, a Mohawk woman (also part of the Iroquois Confederacy).

The Canadian Senecas and Iroquois nations were also subject to government schools, like Native Americans were sent to Carlisle in Pennsylvania.
Canadian Seneca Schoolchildren in their boarding school 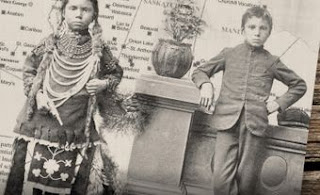 A little girl wearing traditional Seneca clothes.
Thanks for your interest in this wonderful world of the woodlands Natives. I wish I could present it better and I hate to admit that the storms here have unsettled quite a few aspects of daily life today!
Let's hope that Rescuing His Wife makes it!  Best wishes from the soggy Nebraska capitol from Cora Leland Author 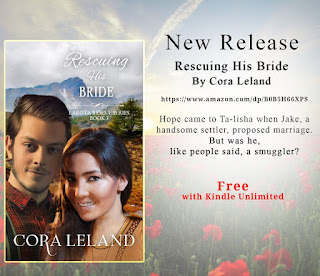