HOW WINDMILLS CHANGED THE WEST

I love both windmills and sunsets. Although they’re difficult to find now, I love the old wooden frame style best. I love the song the windmill sings during a breezy day or evening. With the windows open, the sound is a lullaby at bedtime. Don’t get me wrong, I love modern conveniences, but they’re a trade-off. We lose something with each part of our past that disappears. 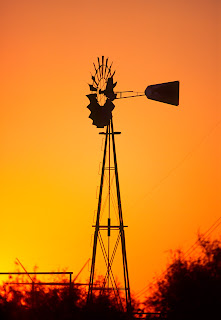 Over 80,000 windmills are estimated to be working now in Texas, the state in which I live. You can’t drive on any road without seeing them in the distance. They are of particular service to ranchers in the arid regions. Land that once was almost useless to ranchers became valuable once windmills were erected. The windmill has come to be one of the symbols of ranching and cowboys. Once I started researching them, I was surprised the type I have come to love was not as old as I’d suspected.

Before the introduction of windmills to the West, inhabitable land was confined to areas where a constant water supply was available. There was no way for vast areas to be settled without a life-giving supply of water. The coming of the windmill made it possible to pump water from beneath the ground, and soon whole new areas were opened up to settlers. The first windmills were of the European style, built by Dutch and German immigrants for grinding meal and powering light industry. What settlers needed most, however, was a windmill that pumped water.

Because of its bulk and need for constant attention, the European windmill was impractical for this purpose. The solution to this problem came in 1854, when Daniel Halladay (Halady or Halliday) built the first American windmill in Ellington, Connecticut. He added to his mill a vane, or "tail," as it was called by cowhands, that functioned to direct the wheel into the wind. The wheel was a circle of wood slats radiating from a horizontal shaft and set at angles to the wind, designed so that centrifugal force would slow it in high winds; thus, the machine was self-regulating and operated unattended. Its simple direct-stroke energy converter consisted of only a shaft and a small fly wheel to which the sucker rod was pinned. This compact mechanism was mounted on a four-legged wooden tower that could be constructed over a well in one day.

Railroad companies immediately recognized windmills as an inexpensive means of providing water for steam engines and for attracting settlers to semi-arid regions through which they planned to lay track. By 1873 the windmill had become an important supplier of water for railways, small towns where there were no public water systems, and small farms. Are you old enough to remember that old television show, Petticoat Junction? 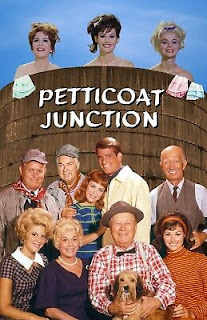 Many of the very early mills were crude, inefficient, homemade contraptions. One of the popular makeshift mills was a wagon wheel with slats nailed around it to catch the wind, mounted on half an axle. The axle was fastened securely to a post erected beside the well. A sucker rod was pinned to the edge of the hub. It was stationary and worked only when the wind blew in the right direction. The windmills used later on the big ranches were the more dependable factory-made windmills.

Windmills moved to ranches with the use of barbed wire in the late 1870s. At first the water holes, springs, creeks, and rivers were fenced, so that the back lands had no access to water. In the midst of the fence cutting and fighting, some ranchers began drilling wells and experimenting with windmills. Most of these experiments were unsuccessful, however, due to lack of knowledge concerning the proper size of the windmill in relation to the depth and diameter of the well. One of the earliest successful experiments was made eight miles north of Eldorado, in Schleicher County, Texas by Christopher C. Doty, a nomadic sheepman. Doty moved his flock into that area and found abundant water in shallow wells. By 1882, however, a drought had dried his wells; he ordered a drilling rig from Fort Scott, Arkansas, bored a fifty-two-foot well, and erected a Star windmill, which successfully supplied water for his 4,000 head of stock.

Watering stock with windmills spread rapidly. Eastern land speculators began buying, fencing, and running stock on the land until it became ripe for colonization. The largest of the Eastern land speculators, the Capitol Syndicate, began using windmills on its XIT in 1887. One of their windmills was believed to be the world's tallest. It was made of wood and was a total height of 132 feet. A historical marker at Littlefield, Texas, marks the site of a replica. The original windmill blew over in 1926. By 1900 the XIT had 335 windmills in operation.

Not until the King Ranch began extensive use of the windmill in 1890 did that the practice begin to spread rapidly over that area. By 1900, windmills were a common sight in the West. Inhabitable land was no longer limited to regions with a natural water supply. The windmill made the most remote areas habitable.

The use of windmills brought about two of the most colorful characters of the West, the driller and the windmiller, and altered the lifestyle of another, the range rider. The driller was usually a loner and seldom seen by anyone except the range rider and windmiller. He followed the fence crews and guessed at where he might find water, then bored wells with his horse-powered drilling rig. When the driller was successful the windmiller followed and set up a mill. Owners of the larger ranches usually employed several windmillers to make continuous rounds, checking and repairing windmills. The windmillers lived in covered wagons and only saw headquarters once or twice a month. The early mills had to be greased twice a week, and this was the range rider's job. He kept a can (or beer bottle) containing grease tied to his saddle. When he rode up to a mill that was squeaking, he would climb it, hold the wheel with a pole until he could mount the platform, and then let the wheel turn while he poured grease over it.

The range rider was always in danger of attacks from swarms of wasps, which hung their clustered cells beneath the windmill's platform; there was the added danger of falling from the tower when such attacks occurred. The windmill industry's shift in 1888 to the back-geared, all-steel mill caused heated debates in livestock and farming circles. Most ranchers and farmers welcomed the new steel windmill because its galvanized wheel and tower held up better in harsh weather; also, its gear system was better able to take advantage of the wind, thus enabling the windmill to run more hours per day. The back-geared mill could also pump deeper and larger-diameter wells. Those who favored the old wood mill argued that the steel mill was more likely to break because of its high speed, that it was not as easily repaired as the wood mill, and that when parts had to be ordered the steel mill might be inoperative for days. Though sales of wood mills continued, they declined steadily, so that by 1912 few were being sold. 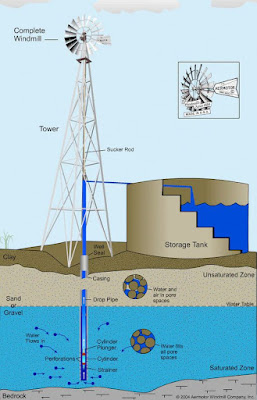 The last major development in the windmill came in 1915. A housing that needed to be filled with oil only once a year was built around the mill's gears. This relieved the range rider of his biweekly greasing chores and somewhat diminished the windmiller's job. Because of the dependability of this improved windmill, worries over water shortages were eased for the rancher, farmer, and rural dweller. This mill was the prime supplier of water in rural Texas until 1930, when electric and gasoline pumps began to be widely used.

The Aermotor Windmill Company, which commenced operations in Chicago in 1888, is the nation’s sole remaining full-time manufacturer of water-pumping machines. Windmills remain an important supplier of water for cattlemen. Texas’ King Ranch in the late 1960s kept 262 mills running continuously and 100 complete spares in stock. Stocking spare mills is a common practice among ranchers who depend on the windmill to supply water for cattle in remote pastures. One important ranch worker is the man who rides—or drives—from windmill to windmill lubricating the gears and making repairs.

Because the windmill has been confined for the most part to remote areas, it has become a symbol of a lonely and primitive life, fitting for the pioneers it first served and the cowboys about whom we love to read.