DO PEOPLE REALLY NEED WATER EVERY DAY? (A Peek at an Author's Process) by Marisa Masterson

Should I let my characters go thirsty? It's the question I asked as I researched the Santa Fe Trail for my latest book. Do I have a wagon train across the wet or the dry route? 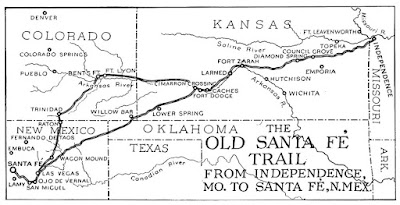 I always want to understand the history I use as background in each of my books. A trip on the Santa Fe Trail should be easy to describe. There is so much history in books and on the Internet describing it. 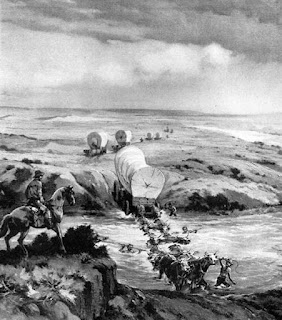 Strangely, it didn't turn out to be a simple thing for me. One thing I used to understand the trail was a "trail dust" chart. It helped me as an author understand how far my characters would travel and what places they would reach.

If the train in my novel followed the mountain route, they had to travel another fifty-five miles. They would have water, though.

If they went by way of the Cimmaron Cut Off to shorten the trip, they would have no good water sources. What to do? Realistically, would the wagons be able to haul the needed water?

Debating this in my head, I allowed the decision between the two routes to enter the novel, Glory, as well.

The preacher proved to be a fount of information about the trail. As they ate, he shared what he’d heard from freighters heading north for more goods. “I hear tell that the Cimarron’s the one to take. That mountain trail is like to kill a man.”

Ollie nodded. “Yeah, so I hear. But it’s the one that goes where we wanna be.” He looked from the man in black to Lee. “Think we’re up to that mountain pass?”

Lee snorted. “We’ve got at least another three hundred miles before we need to decide. I expect things might change betwixt now and then.”

“Journey of the dead,” Hudson growled, low and menacingly. “That’s what the freighters call it. There’s not much water after here. The Indians are looking for chances to attack, also.”

Alfie whimpered. As always, he was near Lee when the scout was in camp. He shushed the small boy and told him to listen to what his pa had to say. The wagon captain ignored his son and shrugged. “We’ve come this far. Don’t expect we’ll turn back now.”

I wrote and rewrote, going back and forth between both. And then--I checked a map again. Since my characters were headed not to Santa Fe but Pikes Peak, it changed everything! They would never take the Cimarron Cut Off. Ugh!

Jarvis, one of Davey’s boatmen shouted, “I done it before. Steep, but it’s better’n that Cimarron route with it havin’ no water.” At the sudden silence of the group, the man cleared his throat in embarrassment but went on speaking. “Course it adds five or six days to the trip.”

“The only trail for us to get to Bent’s Fort and Pike’s Peak.” Ollie squared his shoulders as he stood to his full height. Glory had to admire the man’s ability to regain control over the group. Murmurs of agreement with the captain rumbled across the crowd. Jarvis sank back to the ground, silenced by the disapproval around him.

Jarvis snorted. “Go longer if you want. Y’all should of taken the Smoky Hill route. Better roads and an easier way into Colorado.”

Ollie shook his head. “That way’s not ready. The central route won’t open until next year. That’s what the guide book said.”

Reflecting back over my process, I realize one thing remains true. Yes, a person really can confuse herself with too much research! Thankfully, that confuse dispersed quickly, and this fun novel can into being. 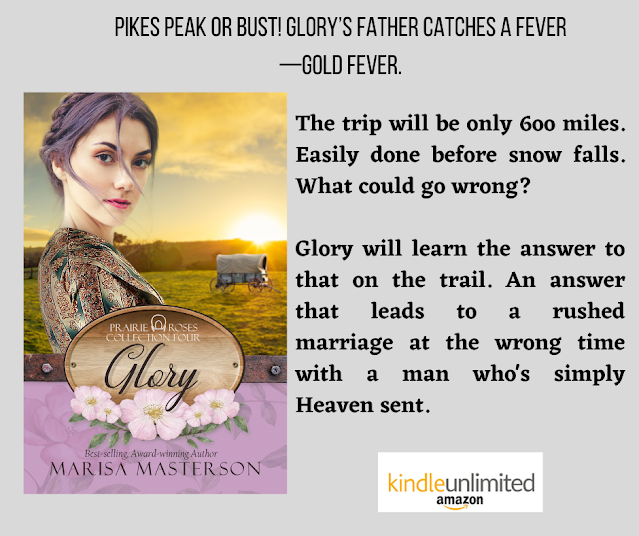