Tom Horn and the Tuolumne County Jail by Zina Abbott 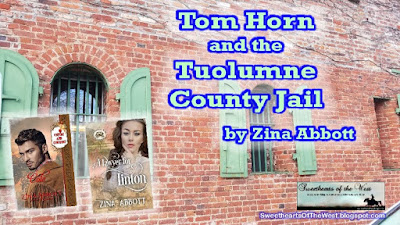 Like all the early gold rush towns, Sonora had its share of lawbreakers and troublemakers. The citizens came up with a series of jails in which to house them. History records the most primitive detention device was an oak tree with a chain around it. The oak was succeeded by a series of simple buildings including a log cabin, a metal cage inside the jail building to house the most violent prisoners, and a masonry building.

In 1866, a new jail was built on Bradford Avenue. This jail replaced a previous structure that was destroyed by fire in 1865, when an unhappy inmate named Tom Horn set fire to his straw bedding.

This was not the same Tom Horn made famous by his Army service in Arizona, his stint as a Pinkerton, or for being hanged for murdering a fourteen-year-old boy in Wyoming. There are pictures of him.

Tom Horn, the Tuolumne County inmate, was a 36-year-old Irish gold miner considered a local misfit. I found no pictures of him, only a jail cell display to commemorate his incarceration in the previous jail and his demise. He was from Columbia, California, about five miles north of Sonora and had a history of committing arson. He rode into Sonora on a drunken spree. After being removed from his horse to save the animal, he made his next stop at the Riffle Saloon. Since it appeared he was not in any shape to ride home, he was taken to the County jail to "sleep it off." He was searched for weapons before being locked up. Unfortunately, he had matches in his possession that either were not found or were ignored. Evidently, Horn thought if he set the fire, they would take all the prisoners out of their cells. As flames went through the building, citizens raised the alarm.

Tuolumne County had hired only one jailer, Mr. Alfred Mills. After he checked his charges for the night, Mills went downtown where he purchased dinner at the same saloon where Tom Horn had been arrested that afternoon. Alerted about the fire by a neighbor name Rutledge who knew where to find Mills, the jailer ran several blocks to the jail. There he found Undersheriff George Seckels already there. Along with others, they did their best to save the prisoners' lives while at the same time not allowing any to escape.

The men saved all the other prisoners, but Horn's door jammed. The heat was so intense it fused the metal door of his cell shut. He died in the blaze.

There ended up being some political fallout because of this incident. The Tuolumne County Museum and History Center reproduced some of the local newspaper articles of the day regarding this incident. Below are a few of them. Draw your own conclusions.

The Sonora Herald, the first newspaper in California's Gold Country, editorialized that it was not uncommon for jailers to be absent and that law men "frequently…had to come down town to hunt up Mills…(to)…gain admittance." The Herald stated that Tom Horn had been yelling "Fire" before Mills departed for the Riffle and that Mills paid no attention to him.

In a letter to the editor of the Union Democrat, the writer said that "Surely, it could not be expected of Mr. M. that he would remain in the prison all of the time, night and day…One man is not enough to perform the duties of the jailer of Tuolumne County. Two, at least, are required."

Here are some other excerpts regarding this incident:

A Brave Officer - As soon as Mr. Mills learned that the jail was really on fire - it should be remembered that there had been several false alarms - he rushed fearlessly into the burning building and took out the prisoners from the different cells at the hazard of his life. The task was rendered more difficult by his having to guard against their escaping from custody in the confusion and excitement, and it is remarkable that not one escaped. In the performance of this duty he was fortunately assisted by the undersheriff and a few brave and reliable friends. All the persons confined were got out but the unfortunate man Horn, and ho effort was spared to save him, Mr. Mills repeatedly gained his cell door, but could not force it open, even after being unlocked. At the most imminent personal risk he persevered, and did not cease his exertions until overpowered by his labors and nearly suffocated with smoke, he fell exhausted in front of the cell door. Here Mr. Mills must have perished in the flames, but for the bravery of Mr. James Bolton, who rushed in and dragged him out. It is conceded by all who know the circumstances, that Mr. Mills performed his duty in a prompt, faithful and fearless manner. Some complaint has been made about his leaving the jail unattended. Surely, it could not be expected of Mr. M. that he would remain in the prison all the time, night and day. The trouble lies in the fact that he was allowed no assistant. One man is not enough to perform the duties of the jailer of Tuolumne county. Two, at least, are required.

The Jail Could Have Been Saved

(From the Chief Engineer's Annual Report)

With a fire engine and a cistern, the jail could have been saved and Tuolumne county saved $15,000, what is more, the life of a human being who perished in the flames. I cannot close my report without calling the attention of the Trustees who now hold office, and those who will be elected in the coming year, to the wants of the Department, and there is but once way to do it, and that is, build four or five cisterns and procure a fire engine. If my recommendations had been carried out, we would now have a substantial Fire Department in this city.

Hoping my successor will accomplish what I failed to do, I most respectfully submit the foregoing.


The jail was rebuilt in 1866. There were two cells blocks, since women and juveniles were incarcerated separately from the men. It remained in use until 1960.

Today, the old jail serves as the Tuolumne County Museum and History Center with the cells and corridors filled with displays of early Sonora and Tuolumne County.

Two of my recent books include Tuolumne County.

Most of Cole is set in Stanislaus County immediately to the west of Tuolumne County, Cole does travel to Sonora in order to buy land near the border of the two counties. You may found the book description and purchase link by CLICKING HERE.

A Lawyer for Linton is primarily set in Tuolumne County. You may found the book description and purchase link by CLICKINGHERE.

Display at the Tuolumne County Museum and History Center