FUN TIMES IN THE OLD WEST

Cowboys on roller skates? Believe it! 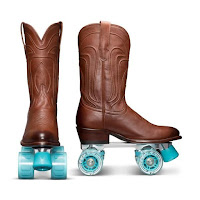 Did you realize that a craze for roller skating swept across the United States in the 1880s? I hope you enjoy learning about activities which our ancestors enjoyed. 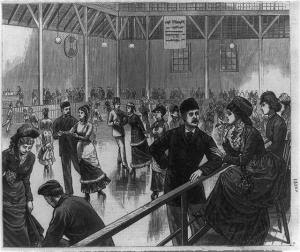 Fancy roller rinks for high society first began to appear in large cities like London and New York. Soon the craze spread to any town with a building large enough to contain throngs of skaters. Where there was no building, they were constructed. The roller rink became a popular meeting place for friends and neighbors, whether or not they skated.

Jean-Joseph Merlin is credited with inventing skates in1760. The inventor and horologist was born in 1735 in Belgium. His roller skates were without brakes. He introduced his skates at a party in London and promptly crashed into a mirror.

Reminds me of the old Chicago metal skates on which I learned to skate, complete with skate key. This was at my grandmother’s in an older area of town. The sidewalks had shifted and some lifted, so that skating meant jumping parts that jutted into the air. Needless to say, I fell frequently. But in spite of cuts and bruises on my knees, I loved skating.

Credit for invention of roller skates is also given to the Dutch so they could skate during the summer. Dutch rollers were one row of what we would call “in-line” wooden wheels from the heel to toe, like an ice skate blade. Supposedly, even babies wore these skates instead of booties.
Monsieur Pettibled applied for the first patent for roller skates in 1819.
The first public skating rink opened in 1866.

After James Plimpton redesigned the roller skate in 1884 with two parallel sets of wheels, popularity spread. The base cushioned with rubber allowed flexibility. Later, ball bearings were added to the wheels. Toe clamps on the skates had to fasten securely to the outer sole or the skater would fall. Some added leather straps around the instep to be sure the skate stayed on safely. These modifications gave the user a chance of staying upright. 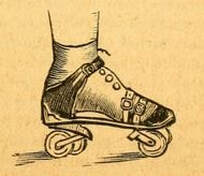 Opinions were divided on whether roller skating rinks provided the public with “healthful amusement” or were “pits of perdition”, as some preachers claimed. No matter the opinion, roller skating was so popular that rinks were built across the nation.

A report of one rink stated:

“The floor is finished, with the exception of the final sandpapering, and the steam pipes will be put in today. Seats for visitors will be erected on both sides, under which the steam pipes will run, so that those looking on will be comfortable. A stand has been erected in the center of the building above the floor for the use of the band or orchestra. Rooms have been partitioned off for the offices, skate rooms, and the accommodation of skaters.”

Before the concept of roller derbies, would you have considered roller skating a spectator sport? Many people came to watch the skaters and listen to the music. Since not everyone who went to the rink skated, the manager booked attractions to entertain the spectators and keep their interest. Examples of these included a skating exhibition, a play, a magician, or a carnival night where skaters came in costume.

Besides the joy of skating and having fun as couples or in groups, special songs and music centered around skating became popular. New songs such as “Roller Waltz”, “Fun on Roller Skates Polka”, “Roller Skate Gallop”, and “Girl on the Roller Skates” were some of the music and lyrics that became popular. My favorite is “Skaters’ Waltz”, written in 1882 by French composer Emile Waldteufel.

Here’s what one of my favorite western columnists, J R. Sanders, has to say:

Roller-skating was instantly popular with young ladies of all social strata, who relished gliding through waltzes and quadrilles with wheels on their feet. Parents and politicians looked askance, worried the fad fostered undue familiarity between the sexes. Doctors were divided— considering it either healthful diversion or downright dangerous. Some clergymen condemned it as a sure pathway to Hell. With all that going for it, how could any red-blooded cowboy resist?

In its heyday that quintessential cow town and acknowledged Gomorrah of the Plains, Dodge City, Kan., had a roller rink. Owned by Dr. Thomas McCarty, it doubled as an opera house and, on occasion, a church. Kansans weren’t alone in their passion for the sport; El Paso had a rink, likewise Cheyenne and Omaha. Montana Territory was ahead of the trend with the Helena Skating Pavilion, built in early 1883, which boasted a 65-by-100-foot maple floor “almost as smooth and hard as glass” and three-tiered wraparound galleries for spectators. A year later the pavilion hosted an “apple race,” with skaters scrambling to be first to collect 21 apples from the rink floor and drop them in a bucket. 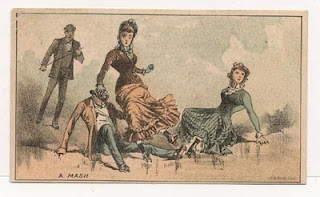 One account of 1885 life in Medora, Dakota Territory, noted, “A roller-skating rink, whose equipment was more to be feared by a cowboy than the hurricane-deck of a cow pony, was doing big business among the cattlemen.” In Cheyenne a drunken cowboy who couldn’t master his skates tried instead to ride his horse onto the rink floor. An attendant seized the animal’s bridle and gave horse and rider the heave-ho, informing the besotted buckaroo that if he returned, “the coroner would have a professional call.”

Skates stymied more than the hapless cowpoke. Texas lawman Stephen Boyard found them tougher than a gang of desperadoes. The October 29, 1884, Daily Laredo Times reported, “Marshal Boyard now takes his meals from the mantle shelf, and when asked the reason why, he gazes sadly at a pair of roller skates, asks you to occupy the official chair and braces himself against the telephone, but he says not a word.” Deputy Sheriff Fred Singer, a former Dodge City marshal, entered a skating competition at McCarty’s rink a week before Christmas, during which, reported the Dodge City Times, he “cut some funny evolutions, ‘lighting’ frequently on all fours.” Other lawmen fared better. In Las Cruces, New Mexico Territory, Doña Ana County Sheriff Eugene Van Patten’s “roller mania” was such that he patronized the local rink most nights, looking “as if he were having more fun than a boy at a circus.” Van Patten enjoyed skating so much that in fall 1885 he built a competing roller rink.

Just like fads today, the roller skating craze disappeared until the 1940s and 1950s. Wouldn’t it be fun to go skating? 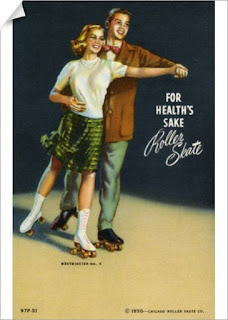 To read a western historical romance which includes roller skating, pre-order your copy of ADELINE now at https://www.amzn.com/B091YYGPLV.

ADELINE releases Monday, June 1. It will also be in Kindle Unlimited. Bachelors & Babies were first. Now those babies are growing up in Cupids and Cowboys. Don't miss this humorous, sweet story of a young woman and her best friend playing Cupid--with sometimes disastrous results. 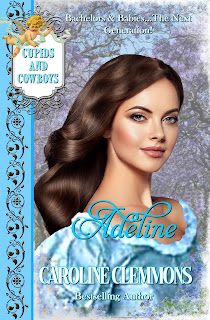