The Romance of Wicker Furniture by Jo-Ann Roberts

In my current work in progress, Marrying the Major, Kit Lambert, a proud Southern belle, seeks counsel from her aunt in a serene setting surrounded by fragrant magnolias, wisteria vines, lilac bushes, and...a grouping of wicker chairs and tables. The object of her dilemma?... a  handsome Union major, Will Chandler, whose unnerving presence in their small southern town at the very end of the War Between the States upends her world and her heart. 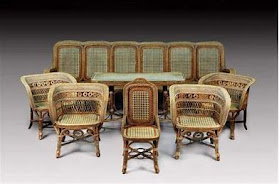 Nothing sparks my romantic imagination  like a peaceful garden  on a warm early summer evening filled with the scent of flowers and graced with ferns surrounding white wicker furniture. I can visualize a couple sharing sweet kisses, gentle touches, and whispered words of love...*sigh*  So naturally, I wanted to add a scene which added an extra element of romance. This desire led me to researching the history of this favorite type of casual furnishings.
Wicker furniture has a long history that spans nearly 5,000 years - from ancient Egyptian rattan weaving, to the outdoor wicker furniture of our present day. The word  "wicker" is of Scandinavian descent and originates from the words wika which means "to bend" and vikker which means "willow".
This popularity of wicker went beyond ancient Egypt and Rome to various European countries, and finally arriving in America on the Mayflower in the form of a baby cradle! 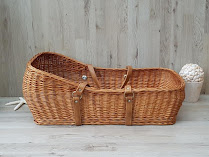 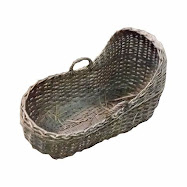 Cyrus Wakefield popularized the use of rattan when he began selling it off ships docked at Boston's many ports. The ships would use the material as light weight packaging, capable of keeping crates together.  These materials were used to keep the cargo from shifting around in rough waters during the voyage from Asia. Leftovers were often abandoned on the docks  until they died but Wakefield had a better idea. He took home an armful of the rattan and wove it around the frame of a chair. From this humble beginning, he rose to prominence as one of America's first rattan furniture makers during the 1860s after he married the daughter of a wealthy shipping magnate. Through the connections his in-laws brought to their shipping business Wakefield was able to import rattan from China. 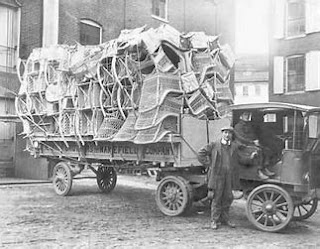 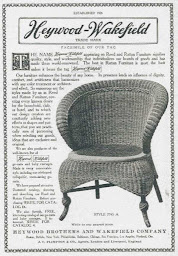 During this time, wicker furniture was used inside the home, on the front porch, and even in the garden. Wakefield Company dominated the industry but was opposed by its largest competitor, Heywood Brothers & Company, who at the time, was the largest manufacturer of wood furniture. The tide shifted when Heywood Brothers developed machinery to automate the process with a loom which could weave the cane. This reduced the price dramatically and the two companies competed heavily in the 1870s-1880s. Ultimately, the two companies merged to form Heywood-Wakefield Company in 1897.
In the world of wicker there are four distinct eras. The Victorian Era (1860s-1900) is notable for its elaborate ornamentation like curlicues and beads, and complicated, handwoven caned back panels in fancy spider-web weaves. Special motifs like moons, stars, and fans were also popular. 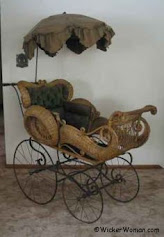 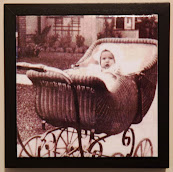 The Turn of the Century Era (1900-1917) featured flowing, wavelike lines. These pieces were all handmade with natural materials. During this time period, Gustav Stickley (founder of the renowned Stickley Furniture Company) introduced a wicker style which was modern and revolutionary in design with its straight lines and open latticework. 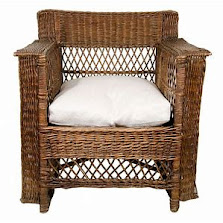 During the Machine Age (1917-1940s) The Lloyd Loom process was patented in 1917 by Marshall Lloyd, who twisted kraft paper around a metal wire, placed the paper threads on a loom and wove them into what was to become the traditional Lloyd Loom fabric. These chairs quickly became very popular in the U.S. in 1921. Upholstered backs and seat cushions were now the rage. 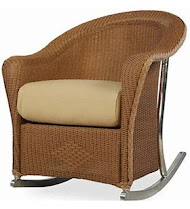 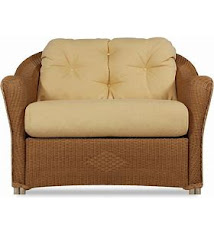 The Art Deco style continued to utilize the paper fiber rush weaving multi-colored diamond patterns into the backs of chairs and settees. 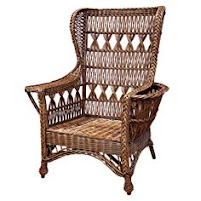 My own love of wicker furniture revolves around summer evenings sitting on my in-law's porch on Cape Cod when I was dating my husband. A two-sided porch wrapped around a ten room Victorian house, complete with a small cottage in the back as well as a huge barn and circular drive. But I always sensed that it was that furniture on the porch which gave the house its personality and sense of style. Though the house was sold a few years ago, I hope the new owners spend soft summer nights sipping ice tea on a wicker glider, holding hands and exchanging loving glances. 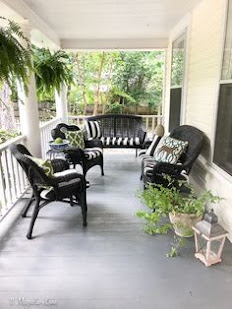