Maybe you've tried channels like Sling or Philo? They offer seven days free just to surf their programing. That's what I was doing when I ran into the fastest shootist Texas ever experienced.

I'm a documentary junky. I love learning. Perhaps that's why I became a teacher. For whatever reason, I ran across this documentary on a man who sent shivers through Texans.

John Wesley Hardin. Mothers used his name as a threat to make their children behave "or Wes would get them." Even Bill Hickok found himself facing the business end of this man's guns. So, exactly who was he?

Named for the evangelist John Wesley, Hardin was the son of a preacher and grew up in Civil War era Texas. With his father's encouragement, he practiced with the gun until he was a marksman at the age of twelve.

One of the tricks this shootist did to prove himself was to hit playing cards at fifteen paces, never missing. By the end of childhood, the man was deadly and bore a nasty grudge against Yankees and any people of color be they Mexican or African-American.

Maybe that's why he killed his first man when he was only fifteen. The former slave had bested him in a wrestling match. When he encountered the man alone in the woods, he shot him and claimed the man attacked him with a stick. The victim lived long enough to declare that a lie. Hardin ran from his home, fearing arrest.

From there, he leaves a trail of dead men. He easily hid amongst a group of cattle drovers taking a heard to Kansas. That's how he eventually met Wild Bill Hickok in Abilene, Kansas. Guns weren't allowed while walking the streets of that town. Typically defiant, Hardin kept his on.

Hickok confronted the armed cowboy, being the marshal, and demanded he remove the guns, Hardin did so and handed them toward Hickok with the handles first. Before that man could grab them, the shootist flipped them so he held them cocked and pointed close to the famous marshal's face.

This wasn't the first man Hickok talked down to avoid violence. The two went into a saloon and shared a drink bought by the lawman. When they met again another year, Hickok didn't ask the shootist to remove his guns.

That was just the type of man Hardin seemed to be. Showy, cocky, and willing to kill. After he returned to Texas and killed a lawman, Texans had had enough.Many put pressure on the governor to send a new group called the Texas Rangers after the man. With a $5,000 bounty on his head, the governor was confident the man would be caught. 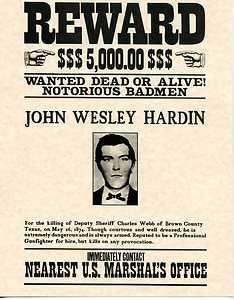 Someone was willing to risk Hardin's guns to claim it, and the rangers caught the man in a railroad car. Not a very glamorous life! 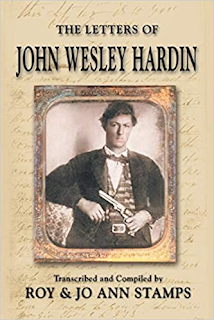 Here's where it gets interesting for me. While Hardin sat in Hunstville Prison, he wrote his autobiography. This is why historians view him as a man with no conscience. He detailed murders, excused them, and vowed he felt no remorse. He was the faster gun and that was all that mattered.

After serving seventeen years, the murderer went free, a supposedly changed man. While in prison, he'd earned a law degree and tried to set up a law practice. Surprise, surprise, but people were too afraid of him to use his services.

He eventually ended up in El Paso where he was shot from behind and killed. It didn't matter how fast he was since he hadn't guarded his back.

One last note--the word shootist. I used that rather than gunslinger to be authentic. Amazingly, the word gunslinger was invented in the 1920's by author Zane Grey. Men in the old west never used it, calling men like Hardin shootists. Very accurate for Hardin, I think!

If you enjoy action, romance, and adventure, please take a look at Ruby's Risk. With our 380,000 pages read on Kindle Unlimited, readers are falling in love with this book. 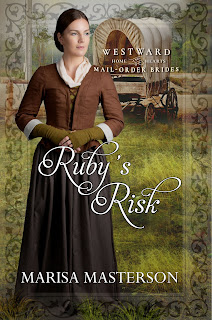 A man might homestead, but it takes a woman to turn that place into a home! This matchmaker will settle the West one couple at a time.
Under suspicion after his wife’s murder, Elias Kline knows he has to leave Mills Bluff. Learning a lynch mob is planning to kill him, he slips away from town. Taking only his smithy tools and his young son, he chooses a new name—Ezra King. Heading west seems a fine way to start over, but he’ll need a wife to raise his son and cook his meals. One sent by an agency shouldn’t expect love, he decides.A matchmaker convinces lonely Ruby Hastings to take a risk on Ezra King. After all, the man is helping fulfill the nation's destiny of settling the west. Reading the man’s letter, Ruby aches for the widower's little boy and seizes on this chance to be a mama to him. After all, with a brother on the run from the law and a newly married sister, her siblings no longer need Ruby and this motherless boy does.It should be a convenient arrangement. What happens when the mail-order wife begins to push past the walls guarding Elias’ heart, challenging him spiritually and emotionally? When danger follows him from Mills Bluff, will Elias be able to keep his family together?
Posted by Sheila M at 5/24/2020