A book interesting to western readers and extremely helpful for any western historical writer is that of Dr. Keith Souter, an English physician who writes westerns as Clay Moore (in homage to Clayton Moore, who played the Lone Ranger). Keith’s book, THE DOCTOR’S BAG: MEDICINE AND SURGERY OF YESTERYEAR, is primarily aimed at writers and readers who are interested in the American Southwest.

Disclaimer: The book is not intended as a medical textbook for modern treatment of illness and injury. Instead, THE DOCTOR’S BAG explains past treatments for various common problems. As writers and readers of western historical novels, this is information we can find helpful. He covers everything from snakebite to hanging.

Who was the best doctor in the Old West? How did the doc remove an arrow? Could silk really stop a bullet? What was the “Germ theory”? The answers to all these questions and more can be found in THE DOCTOR’S BAG.

The book begins with a reminiscence of Gunsmoke. My family seldom missed seeing the show on television. However, I didn’t realize it had first been a radio show. Doc Adams is used as an example of the stereotypical Old West doctor. By the way, I didn’t realize Doc Adams had a dark past, but he had killed a man in a duel, fled west, and changed his name.

I admit I’ve used the book to research particular treatments rather than reading it cover to cover but it is interesting enough to sit down and read for pleasure. The table of contents clearly lists the ailments with possible treatments. This is helpful when a writer needs quick access to a remedy. We turn to Google, but the information there is not always trustworthy and often offers contradictory information. THE DOCTOR’S BAG is a factual reference, often with illustrations, with easy to understand explanations.

THE DOCTOR’S BAG is available for free in KU or in print from Amazon:
https://www.amazon.com/Doctors-Bag-Medicine-Surgery-Yesteryear-ebook/dp/B0160Q21XG/

Dr. Souter was born in St. Andrews, Scotland, and attended the University of Dundee. He lives in West Yorkshire in England with his wife Rachel within arrow-shot of the ruins of a medieval castle. He is a prolific author in four genres—westerns, crime, historical, and YA. He also pens a weekly health column. He writes crime as Keith Moray and non-fiction as himself.

Dr. Souter is a member of Western Fictioneers, an online group to which many western and western romance authors belong. We exchange information and generally chat about subjects of interest to those who write in these genres. This is an io group open to all writers willing to post only topics of interest to writers—no politics, etc. He is also a member of Western Writers of America, International Thriller Writers, Crime Writers Association, and the Medical Journalists Association. To learn more about him, check out his website at https://www.keithsouter.co.uk. His blog is at https://moreontherange.blogspot.co.uk 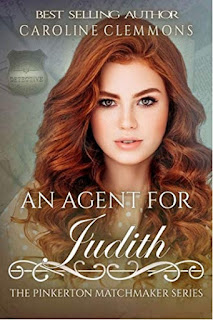 My next release, now up for pre-order, is AN AGENT FOR JUDITH, Pinkerton Matchmaker’s Series, book #79.

Judith McAdams vows to rescue her brother, even if she has to become a Pinkerton agent and enter a marriage of convenience with Peyton Knight. Their mission takes them to Northern New Mexico and pits them against a crooked lawman and a greedy rancher who doesn’t mind killing those who oppose him.