Frontier Gamblers of the Old West by Shirleen Davies

Gamblers were captivating Wild West figures, known for their risk taking and daring exploits. Some became famous. Others infamous. Regardless, each one were memorable in their own way.
Gamblers of the Wild West
Poker Alice—Alice Ivers Duffield Tubbs Huckert —carried a gun, smoked cigars, wore the latest fashions, and never gambled on Sundays. On her best nights, she’d take home $6,000 by card counting and figuring odds as well as distracting male players with her beauty.
Bat Masterson, a gambler and gunfighter, won enough at cards to set up his own Olympic Athletic Club, promoting up-and-coming boxers and organizing pools on matches.
Doc Holiday—John Henry Holiday was a dentist, who moved to the warm climate of the west because he had tuberculosis. There, he began his gambling career. He is best known for his part in the O.K. Corral gunfight.
Madame Moustache —Eleanor Dumont, a skilled blackjack dealer and card counter, opened her own gambling den called Vingt Et Un with carpets and crystal chandeliers. Madame served free champagne and her patrons had to clean up their boots and their language to play in her casino. Though she went by the name Madame Moustache, because of a small line of dark hair on her upper lip, she was known for her beauty and charm.

Kitty Leroy gave up her professional dancing career at age 20, to become a faro dealer and gambler. She owned over a dozen guns and knives, which she’d pull out in a pinch. She set up the Mint Gambling Saloon with Calamity Jane and Wild Bill Hickok in Deadwood, South Dakota. In 1877, her fifth husband flew into a jealous rage over her many affairs, shot her dead, and then killed himself.

Wild Bill Hickok—James Butler Hickok was involved in several shootouts and spied for the Union Army during the Civil War. He died with cards in his hand, shot in the back after busting out a competitor. Thereafter, his last hand (two pair, black aces and eights with an unknown hole card) was known as ‘dead man’s hand.

Dona Maria Getrudes Barcelo turned to gambling to support her children after her husband ran off. A beauty with a knack for cards, she was called ‘la Tules’ (Spanish for ‘thin’ or ‘reed’). Barcelo became the richest woman in Santa Fe as well as the most famous female gambler of her time.

Wyatt Berry Stapp Earp was actually listed as a professional gambler in the 1887 San Diego City Directory.  He was also a deputy sheriff, then later a marshal, in Arizona Territory. In Tombstone, Earp owned gambling interests in several saloons where he not only dealt Faro but also avidly bucked the bank. Notably he worked as a manager at the Oriental saloon running the faro tables and as an enforcer, keeping gamblers out of fights and gunfire.
Lottie Deno—Carlotta J. Thompkins was the model for Miss Kitty on Gunsmoke. Her father taught her every card trick he knew. By fleecing Doc Holiday at poker once, she earned the title ‘Poker Queen.’ In Texas, she fell in love with a gambling man named Frank Thurmond, but he was accused of murder, so she fled with him to New Mexico where they opened a hotel and gambling room. Lottie also owned a restaurant in Silver City where she and Frank got married in 1880.

Games Of Chance
Faro
The most popular game in the West was faro. Using a green cloth-covered layout with painted images of 13 cards, players placed chips, called checks, on the picture of the card they thought would win and a token called a copper on top the checks to bet that a card would lose.  They could back any number of cards, change bets between turns, and wager if the face value would be odd, even, or the higher of the turn. The dealer dealt two cards per turn. If a pair turned up, the house took half of any bet on that card, these were called splits. Cheating in Faro was so prevalent that American editions of Hoyle’s rules carried disclaimers that honest faro could no longer be found.
Three Card Monte
Three Card Monte was a scheme. A dealer laid three cards face down then picked up one and showed it to the player. They’d put that target card back, face down, and quickly move the three cards around. The player tried to pick the target card. The dealer lured people into the game by using a partner, disguised as an everyday player. The dealer moved the cards slowly when he was playing with his accomplice, who always won.  So, the audience, who thought they were watching a real game, grew confident that they could find the target card. The dealer let real players win the first few rounds to get them to bet more. Then, they’d speed up their shuffling. They also used sleight of hand and often bent corners to cheat the players. The famous gambler Jefferson Randolph Smith II died in a shootout over gold he’d scammed three miners out of in a game of Three Card Monte.
Vingt et Un
Vint et Un is the French name for Blackjack or twenty one. The aim is to get 21 points without going over 21 or to beat the dealer’s score.

Roulette
Roulette tables have a wheel at the top of the table, and under it is a layout of the options you can place your bet on. Bets can be placed on high, numbers 19 to 36, or low, numbers 1 to 18, the color of black or red, or whether it will be an odd or even number, and on a single number or several different numbers at a time. A croupier spins the roulette wheel in one direction and in the opposite direction they spin the ball in a circular track that runs around the inside of the roulette wheel. When the ball slows down it drops into a number on the wheel.
Poker
Poker wasn’t popular at first because it was a slower paced game, but eventually it could be found in most gambling halls. Old west poker decks had twenty cards and all of them were dealt to the players. There weren’t any draws, everyone had to play the cards they were dealt.

Gambling Scandals
Most scandals had to do with cheating which was rampant. One cheating method players used a lot was the horsehair copper-simply—a copper with a strand of horsehair attached was secretly yanked from a winning card.
Soapy Smith was a notorious cheat who formed the Soap Gang, which ran shell, Three Card Monte, and rigged poker games. He was known for showing a crowd a bill, sometimes as high as $100, then wrap it up in a bar of soap, place it amongst normal soap bars, and invite the crowd to auction for the bar they thought contained the cash. But, there wasn’t any money in any of the soap in the pile. He used sleight of hand to trick the customers. He also employed accomplices in the crowd, who would unwrap the soap and claim they’d won a large amount of money. He died in a shootout over gold he’d scammed out of three miners in a game of Three Card Monte.

Cheating often led to gunfights. Wild Bill and Bat Masterson were shot by poor poker losers. Poker Alice shot a man who accused her boyfriend of cheating. Lottie killed a man who swindled her. And, Doc Holiday killed one man for grabbing his chips, and another for looking at the discards.
Mystery Mesa, book fifteen in the Redemption Mountain Historical Western Romance Series is now on preorder through most retailers! 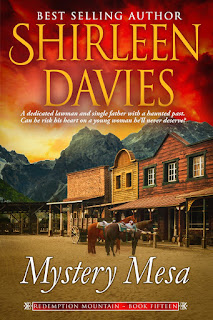