Today I'm thrilled to announce the release of my latest book, Bound by his Word! 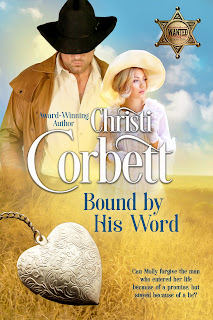 Here's a little detail about the book...

As he held his dying best friend in his arms, Luke Higgins made a promise—to return a locket to the man’s wife.
He arrives to find a proud yet exhausted woman, struggling to run the town’s sole restaurant while raising her young son. Luke hires on as her cook, figuring he’ll stick around long enough to help her regain her footing, then hand over the locket and leave. Months later, with guilt gnawing on him worse than any of the injuries he sustained in battle, Luke finds himself falling for his best friend’s widow.
Molly Fulton is intrigued by the handsome stranger whose willingness to work brings her much-needed funds, and something more precious than money—time with her son. She ponders a life with him as more than just her cook, until her son stumbles across a long-lost treasure hidden in Luke’s coat pocket.
Can Molly forgive the man who entered her life because of a promise, but stayed because of a lie?

This has been a HECTIC week, and I'm about to head out the door with my twins for a four-hour drive (and doctor appointment). I won't be back until late tonight, but I'd love to hear from you, lovely reader. What's new in your life? Leave a comment and let's chat,