Mail Order and Proxy Brides – Why?

I am participating in the Proxy Brides multi-author series. I’ll be having a new one coming out in March and need to start brainstorming ideas. Since this is my fourth to write for this series, I was scratching my head a bit as to what scenario to write. This coincided nicely with my need to write this article. So I started doing some research and now my brain is abuzz with ideas. This was definitely a win/win situation :-)

One of the most basic reasons that men tried to find spouses through the mail during the nineteenth century was because of an imbalance in the gender ratio. There were many factors that contributed to this imbalance, ranging from the California gold rush, to the American Civil War, to westward expansion. The first significant event to contribute to the unbalanced gender ratio was the discovery of gold in California in 1848. It inspired many a man – both domestic, and international – to head to the American West in an attempt to find his fortune. Many pioneers were disappointed to discover that all of the easily-accessible gold had already been panned. After investing extensive time and money to travel by ship, wagon, or railway, however, they were not about to head back home. As the 19th century progressed, pioneers headed into the mid-West and West in search of gold, natural resources, open land, and a fresh start. Some were coming from the eastern portion of the United States, but others came from foreign countries. Between 1850 and 1890 approximately 7.5 million European immigrants traveled to the United States, a portion of them settling on farms in the western part of the country. Due to the demanding nature of farming, some men sought to marry and have children who could help them to establish and maintain a farm. For others it was particularly significant to marry and have children so as to carry on the family name.

There were plenty of other reasons that men of the West wanted to marry. Some men desired a spouse because they were lonely, some needed money, and still others hoped for someone who shared their cultural background. It is important to note that while there were not as many white women in the American West, there was not a total absence of women. Indigenous women were, of course, present in the American West, and some pioneers formed relationships with them. Statehood advocates feared that inter-racial marriages would not count as “civilized behavior” and therefore threaten the possibility of transitioning from territory to statehood. Many Americans expected that the presence of (white) women would help to civilize the Wild West by replacing alcohol, gambling, and prostitutes with schools, and churches.

Just as the West drew men with the promise of opportunity, fortune, adventure, and a new beginning, it also did for women. In many cases marriage provided a literal ticket for a woman to go West and seek a better life. Other women also found that the mail-order method of match-making allowed them to pursue ambitions of their own, such as greater personal autonomy. 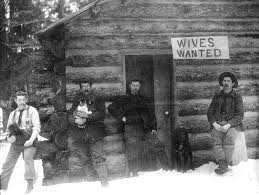 Some western states made a deliberate effort to encourage the migration of women by promising them liberal women’s legislation. In 1849, for example, California legislators crafted a state constitution that defied the tradition of coverture law. That is, the Constitution allowed women to retain ownership of their property upon marriage. Henry Halleck helped craft the Constitution, and he explained the end of coverture as a means of attracting single women to settle out west. Here’s what he said: “I do not think that we can offer a greater inducement for women of fortune to come to California. It is the very best provision to get us wives that we can introduce into the Constitution.” Kansas (1855), Oregon (1857), and Nevada (1864) also eliminated coverture laws with the intention of drawing women to their states. Since western legislation promised women autonomy, and western men offered marriage, independent women could achieve the former by agreeing to the latter as mail-order brides.

In addition to its favorable property laws for women, California offered women the legal right to initiate divorce. Presuming that women outside of California were aware of this law, it made marriage to a man met through the mail a slightly less risky proposition – if the marriage turned sour, women had legal rights to leave it.

States also wooed women to traverse the country with the promise of suffrage. In 1869 Wyoming became the first state to allow women the right to vote. Utah (1870), Washington (1883), Montana (1887), Colorado (1893), and Idaho (1896) followed suit, all promising women suffrage prior to their East Coast counterparts.

Some women became mail-order brides not to advance their position or pursue their own goals, but simply to survive. Women often depended upon men in their lives to provide for them economically. Losing a husband to death introduced an economic vulnerability. Having to provide for children after the death of the breadwinner only exacerbated economic woes.

The death of men in the Civil War only compounded the gender ratio imbalance that the resource rush to the West had begun. Between 1861 and 1865, nearly three million men fought in the War. One in five would die. Many others survived but came home grievously injured. The death count alone, though, was equivalent to approximately two-and-a-half percent of the general American populace. Although this might not sound significant enough to threaten women’s marriage prospects, the average age of a Union soldier was 25.8 years old – prime for marriage, therefore the one in five was concentrated among eligible men. As such, many women feared that with the new scarcity of men, they would end up spinsters.

This was such fascinating research and will lead to an even better book for me. Thanks for letting me share! In the meantime, have you read my latest Proxy Bride book, A Bride for Alastair? 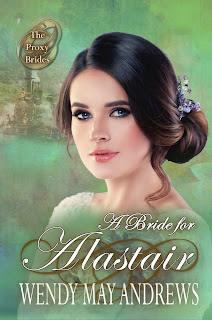 Secrets divide them. Could love build a bridge to help them overcome their deceptions?
Jane was full of resentment and fear when the man she had married by proxy came to collect her. She resented the circumstances that required her to marry and was afraid of being tied to a stranger, especially a stranger she had to keep secrets from.
Alastair Fredericksburg, Fred to his friends, had arranged successful proxy marriages for a few of his friends but still had mixed feelings about marriage due to his sister’s unhappy union. He was understandably hesitant when his friends Ella and Carter McLain contacted him requesting that he arrange a marriage for their friend, Jane.
When a sudden inheritance that would solve many of his sister’s problems is dependent on his marriage, Fred can’t decide if it’s the Devil or Providence watching out for him. Since Carter had already sent Jane’s proxy, Fred quickly signs and registers their marriage. After making sure his sister was secure, Fred boarded the westbound train to claim his wife.
Jane was certain it was only the sweet wine they had been drinking that had caused her to agree to Ella’s rash suggestion. She had failed to tell Ella of the secrets that made her an ineligible match for Alastair Fredericksburg. Would she be able to keep her secrets from her new husband? And could they ever be happy while divided by deception?

Buy it now from Amazon, included in your KU subscription:  https://amzn.to/2LO40BK