DATES OF STATEHOOD West of the Mississippi By Cheri Kay Clifton

Clark County Heritage Museum in Henderson, Nevada, where we have a home, announced that October 31st was not only Halloween, it was also the 155th anniversary of Nevada's statehood. Eight days prior to the presidential election of 1864, Nevada became the 36th state in the Union.


With that in mind, I thought I'd re-post the article I did a few years ago listing the statehoods west of the Mississippi where most of our historical western books take place. Always a good reference! 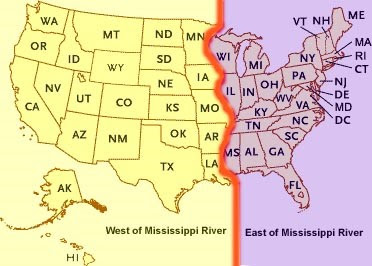 Listed in alphabetical order are the 24 states, when they officially became states and brief trivia about the origins of their state names, many of which came from Native American languages. Although not a part of the contiguous United States, Alaska and Hawaii are included in the list of 24 states west of the Mississippi.

ALASKA, Jan. 3, 1959  Historically a district from 1867, it became an organized territory in 1912. The name originates from an Aleut word, "Alyeska," meaning "great land." The Aleuts are people inhabiting the Aleutian Islands and western Alaska.

ARIZONA, Feb. 14, 1912  The name is debated by historians, however, the region was sometimes called Arizona before 1863, although it was still in the Territory of New Mexico. The Spanish called the region Arizona based on Native American words translated to mean "silver-bearing" or "place of the small spring."

COLORADO, Aug. 1, 1876  Spanish origin, meaning "colored red." The name was given to the Colorado river because of the red sandstone soil of the region.

HAWAII, Aug. 21, 1959 The name is possibly based on the native Hawaiian word for homeland, Owhyhee. Captain James Cook discovered the islands in 1778 and named the group, "the Sandwich islands" in honor of the Earl of Sandwich. This name lasted until King Kamehameha I united the islands under his rule in 1819 as the Kingdom of Hawaii.

IOWA, Dec. 28, 1846  The name Iowa comes from the Iowa River, which was named for the Native American Iowas, a Sioux tribe.

NEW MEXICO, Jan. 6, 1912  New Mexico was named by the Spanish for lands north of the Rio Grande.  Mexico is an Aztec word meaning "place of Mexitli" (an Aztec god).

OREGON, Feb. 14, 1859  Uncertain to the name's origin, however, it is generally accepted that it was taken from the writings of an English army officer, in which he refers to "the River called by the Indians, Ouragon."

WYOMING, July 10, 1890  From the Delaware Indian word, meaning "mountains and valleys alternating," and was first used by the Delaware people as a name for the Wyoming Valley in Pennsylvania.

WASHINGTON, Nov. 11, 1889  Named in honor of George Washington, our first president of the United States and the only state in the Union that is named after a president.

Stop by my website and get to know me and the books I've written.
CheriKayClifton.com