"Where we choose to be-- we have that power to determine our lives. We cannot reel time backward or forward, but we can take ourselves to the place that defines our being."
Sena Jeter Naslund. 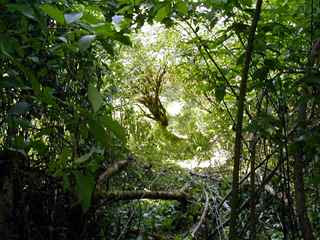 In my own books, place is almost always key. My characters are often a product of the region in which they grew. It's not everything, but I've considered it one of the characters for how it shapes someone. It's why I only put my stories in places I have either lived or spent time. Not all writers need this for their stories, but I always have wanted it. Of course, imagination adds to it. One of my books is an Oregon Trail story, and even though I didn't follow the whole Trail, I've been on major sections of it. Even more, the dream of what these pioneers would find when they got to Oregon, I understood from my own experiences. 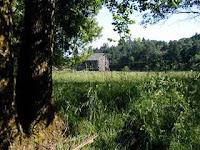 So what I want to write about today is how place has helped shape who I am as well as my stories. This is about the land where I have lived 42 years. My place is on a year round stream. Water is key to life and this stream has quite a story it could tell.

In the Oregon Coast Range, the quiet lays round the spring, buried in ferns, sheltered by large trees. Water rises up through layers of basalt and clay. It bubbles to the surface and heads on a journey. As with all coastal streams, it is a product of springs. It is not fed by snow melt as this is a mostly temperate climate. The surface springs here are fed by rainfall. Far below their surface is an old lake where its waters are much different for their chemical makeup. The streams do not depend on it.

When the water reaches the thirty acres outside my windows, it has traveled less than twenty miles from its origin. It has been added onto by those springs on the hills. Here it’s eight to ten feet wide and most places no deeper a foot or two except when in flood. The water takes on a new name when it plunges into a river about a hundred feet from our home.

The water I can touch as it passes the farm will be carried through canyons and farm lands, past forests, cutting through cliffs of clay and sandstone before it enters rivers that grow

larger before it reaches the Pacific Ocean. With time, it will return to this land as rain and start all over again. This is part of an ever changing ecosystem for a host of insects, birds and animals. They live out their lives here, taking their life for granted. I never take my time here for granted.


The deer, raccoon, turkey, fox, bear, cougar, duck, steelhead, and trout seem unlikely to have named my stream. Wild things know where these places are but don’t need to title them. Humans like to name things. The Kalpuya probably had a name for it. It’s lost to time if they did. Over centuries, they traveled in a yearly cycle and here they fished, hunted, dried meat, gathered berries, dug roots, and ground acorns as they camped along the banks.They left behind arrowheads and grinding bowls as well as hidden burial sites.

The first Europeans who came to these beaver-rich valleys, were trappers and explorers. It is thought they may have brought with them malaria which decimated the numbers of the indigenous already here.  When the first settlers arrived, they talked of seeing a few Indians walk past. It was a peaceful coexistence. There were no Indian wars fought in these valleys. I've been told that the ones here knew of the burial of one of the Kalapuya on a knoll—a hidden grave. Maybe it's not far from where the first pioneers established their cemeteries-- both a family and community one. There are other small family plots behind many of the farms with only a few left to know their place or tend them.

The early settlers did name the creek as they claimed the land, built cabins and barns, birthed babies, and died along these banks. When I wade the creek, I find evidence of all who came before me from Kalapuya to settlers where broken pottery and parts of equipment were buried in the sandy soil. When we first got here, there was a steel cable across the creek which was used by loggers to move their logs to the nearby river and get them to the sawmills that were here when we first came. Jump dams stop the stream enough to float them down as they released the water.

Below our barns was where wagons forded the stream on solid sandstone-- before bridges. I've been told that in the seven oaks there would be metal rings that were used to tether horses. One logger said that if you try to cut down some of those old trees, your chainsaw would run into them. I'd only cut one down if it became dangerous to the house due to disease or old age. Ours are now well over a hundred years and a hundred feet tall-- huge, precious oaks shelter this house and saw what I've only read about. Their acorns fed families and now feed sheep.

I’ve only been here forty-two years, making me a piker in this rural community where some have always been here. Although I also grew up in a home on the edge of wilderness, it was not this one. None here knew me as a child, but my children have many who can say they knew them back then. 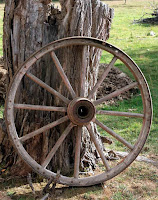 What I learned when we first came to this valley is that my family had come here when they left South Dakota for health reasons. One of the homes still standing had family who hosted them until they could get settled in another nearby community. I had distant relatives here that I had no idea. Does place draw us in ways we don't really know consciously?

Is place important to who we are? Some would say no and that we bring us with us wherever we go. Others know it's the core of their being. In this Oregon valley where I live, there are people who have never lived anywhere else, have barely been out of these hills. For some, their parents were born on the land they still occupy. Of those I met when we first arrived, many are now buried in the country cemetery above the church as are my parents and that of Ranch Boss'. 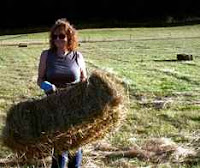 Times have changed-- yet in many ways not so much as we still do what we came here to do-- raise cattle and sheep, which we market as grassfed. I no longer buck bales but still love the land and its stories. I sought this life of ranching and despite its pain, sometimes tragedies, and the hard work, I feel blessed to have experienced a place so deeply as I have on the banks of this stream. Does being a country woman define me? Not totally, but it has been an important part of what has for most of my life.

The other thing that helps define us are our stories. I have one to share with my December blog in Sweethearts. It was told me, and I have also researched it. It's about one of those first families, settlers to the land on which I live today.


My first book about a family and the journey west on the Oregon Trail. Round the Bend


My romances are historicals, contemporary, and paranormal
with more about them at Rain Trueax
Posted by Rain Trueax at 11/12/2019