What and where is the King Ranch?

Some would answer, “It’s a Ford Truck.”  And yes, one can be found in our garage. My hubby has owned King Ranch trucks for years. 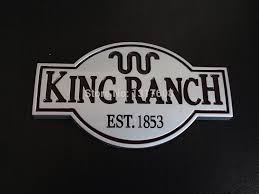 However, seeing the famous “W” brand on our leather console and floor mats as well as the “EST. 1853” designation, the question for me arises, was there really a King Ranch?

Here’s a little history about a huge ranch in the big state of Texas.

Ranches in the American West grew in both size and number after the American Civil War. What may have been the largest ranch in the world in the late 1850’s was the enormous King Ranch, located in southeast Texas, south of Corpus Christie. Founded in 1853 by Richard King, the King Ranch covers 825,000 acres (1289 square miles) – a little over the size of Rhode Island.

Born to a poor Irish family, King grew up in New York City. Wanting to escape the confines of city life, young Richard learned the trade of seamanship, became a captain and with hard work and determination, made his way into the steamboat industry along the Alabama and Florida rivers. After moving to South Texas, he built up his river transportation empire, running supplies on the Rio Grande during the Texas Revolution. 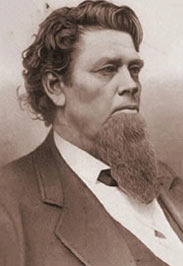 Soon he was investing his money in land for cultivation and cattle raising and by 1855 had grown a ranch empire of longhorn steers as well as thoroughbred horses. In fact, the legendary vaqueros and many of Captain King’s descendants have been devoted to the ranching life through the generations and have made top quality horses a clear priority on King Ranch. 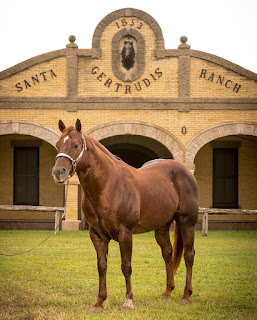 The “running W” brand the King Ranch uses today first saw duty in the 1860’s and was officially registered in 1869. Not even the current King Ranch management knows for sure where the “W” really comes from. Some believe it represents one of the ranch’s many diamondback rattlesnakes or possibly the Santa Gertrudis Creek. Others say it signifies the sweeping horns of a Texas longhorn bull. 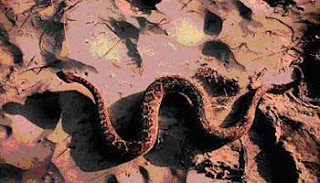 Regardless of its meaning, today the Running W appears on both prize-winning cattle and top quality leather goods as an indisputable icon of the American ranching industry.

Oil fields and timberland increased the success and wealth of King Ranch into the 20th Century and the empire now has satellite locations in Florida, New Mexico and South Carolina.

Is it still the biggest ranch in the world?

The King family and the ranch are part of the myth and mystique of Texas and have been featured in numerous stories and novels. The Kings of Texas traces the history of the ranch through “decades of conflict arising from the Mexican-American War, the Civil War, and the many skirmishes between Texas Rangers and border bandits.

Edna Ferber’s novel, Giant, about the ranches of Texas was turned into a film of the same name. The theme song of the film is a staple for high school bands in Texas. Many of the events of the King Ranch, such as the discovery of oil on the property, are also in the film.

In the James Michener novel, Centennial, the Venneford Ranch was said to be patterned after the King Ranch.

The western historical fiction novel, Lords of the Land by Matt Braun is based on the King Ranch and its founder, although names and some circumstances were altered.

After reading but a small portion of the history of Richard King and the King Ranch, I can see why Ford is proud to put its symbol on their trucks.

Visit my web site at www.cherikayclifton.com and check out my books on Amazon

"The Old West isn't just a time or place, it's a state of mind."