Who hasn't done a double take when a cowboy walks into a room?

The first think you see is the hat whether it's still on his head or he's holding it in his hand. Then either the t-shirt or the snap-front shirt tucked into blue jeans. And not just any blue jeans either Wranglers or Levis. Then the boots. Either lace up Ropers or the regular pull on boots. Though sometimes they might surprise you and have on athletic shoes. But there's something about the way they carry themselves and interact with other people that draws your attention and lets you know they're a cowboy.

The cowboy is still an icon or awe and mystery. They have an unspoken code of manners and right and wrong that you don't find in among other occupations. I learned this first hand when interviewing four time and reigning bareback champion Bobby Mote and his wife Kate. I'd decided to have a rodeo athlete as the hero in a contemporary I was plotting. So I contacted Bobby via his blog and asked if he would allow me to pick his brain to get into the head of a rodeo character for a book. He was very gracious and after e-mailing back and forth for a couple of months to find a time between his rodeo appearances, we finally had a date.

I drove to his ranch and met his wife and two kids. The oldest was at a friends house. Bobby was just finishing up his morning workout. It's hard to ogle a man twenty years younger than you with his wife and kids present but he finished up his crunches in a small workout area next to the living room while I tried to make small talk with his wife. 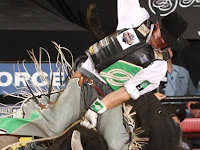 Then he went and showered and I found out what life is like when Bobby's on the road and Kate was home taking care of things. And what it was like when the whole family hit the road with him. Bobby came back wearing jeans and a big belt buckle looking hesitant. He is a humble person, and I had to really coax things out of him. Like most cowboys when not around their buddies they can be a it tongue tied.

I gathered the needed information about rodeo schedules, his emotions when getting ready for a ride and after a ride. And hopefully, I used the information well enough to bring my fictional rodeo athlete Holt Reynolds to life in my book Bridled Heart.

As a writer have you gone the extra mile to learn an occupation for a character in your book? AS a reader can you tell when an author has found out all they can about an occupation?

Holt Reynolds let his younger sister down when she needed him most. With the similarities to his sister far too evident in Gina, he can’t get the woman out of his head, or her poignant music out of his heart. But how can he find a way to free her bridled heart before the past resurfaces to destroy their one chance at happiness?

“Why do you help with this event?” He laced his fingers together resting his hands on the table in front of him. His coffee-colored gaze held admiration.
She dropped her gaze and picked at her napkin. His interest was flattering, and he hadn’t attended the event just to inflate his image. If that had been his agenda, he would have stayed to be photographed with the person who purchased his art. She peered into his smiling face. He waited so patiently for her to answer. By this time most men would have given up on her and moved on to someone else. She searched his eyes. He seemed genuinely interested.
She took a deep breath and hoped she wasn’t going to regret divulging more. “I see so many children in the ER rooms who…” she turned her head and chewed on her cuticle. When they arrived needing her care, she put aside her emotions and did the job, but afterward, she always broke down. How could a parent do that to a child? She knew how it felt to grow up feeling different.
He placed a hand over the one on the table. “It’s okay, you don’t have to tell me. I can see their plight affects you.” He squeezed her hand. “I could tell when you were playing the piano your heart is filled with sorrow.”
She stared into his eyes. The sincerity of his words and the acceptance of her pain, even though he thought it was all for others made her want to weep. She hadn’t had anyone care about her in so long, she didn’t know how to act.
Jerking her hand out from under his, she stood. “I have to go.”
“Wait.” He snagged her hand as she grabbed her coat from the back of her chair. “Do you have a phone number?”
He held her firm but gentle. Warmth spiraled up her arm and settled in her chest. Why didn’t she feel frightened or invaded by this man? She shook her head. She didn’t want to see him again. If she did, it would be hard to remain faithful to her vow. He’d started to seep into the empty cracks created over the years.