In addition to gold rushes, there were a series of silver rushes. Creede was the last silver boom town in Colorado in the 19th century. The town leapt from a population of 600 in 1889 to more than 10,000 in December 1891. The Creede mines operated continuously from 1890 until 1985. They were served by the Denver & Rio Grande Railroad. Traveling by highway today, Creede is about 265 miles southwest of Denver and about 260 miles north of Albuquerque. Creede is located in southwest Colorado just north of the Rio Grande River and east of the San Juan Mountains.

A miner named Nicholas Creede was prospecting in what became North Creede in 1890.

Supposedly, when he hit a rich strike he said. “Holy Moses, I’ve struck it rich.”

That makes me laugh, but he was right. The Holy Moses Mine became one of the most profitable in the region.

The small boom of 1890 increased when Nicholas Creede sold the Holy Moses mine for $70,000 to three investors who were connected with the D&RG Railroad. Creede was to receive a stipend of $100 a month to continue prospecting plus one-third of all future finds. He then located the rich Amethyst vein which included several lucrative mines. His income was estimated at $1,000 per day in 1892.
News of the big sale brought more people to Creede. At the same time, the Sherman Silver Purchase Act was passed by Congress in 1890, almost doubling the price of silver. You can understand why this brought increased numbers of prospectors to the Rocky Mountains where there were known silver strikes.

As more people heard of the strike, a camp bloomed in lower East Willow Canyon. Shacks, cabins and businesses began to be built. Some of those who came were families with women and children as a part of camp life from its beginning. The camp was first called Willow Camp, but in the fall of 1890 the miners voted to change the name to Creede. The narrow canyon was soon overflowing, so building was extended downstream and into Willow Canyon. This canyon was slightly larger, so cabins, houses and businesses were built there, too. However, the tale is that town space was at such a premium that buildings were even constructed on stilts in the river.

The year of 1892 was the biggest boom time in Creede’s history. By late spring, the boom brought miners, businessmen and ordinary folks. But it also brought in scoundrels – con men, gamblers, ladies of the night, gunslingers and others who wanted to mine the miners rather than the hills.

Bob Ford, infamous killer of Jesse James, found his way there and he soon became the “camp boss” of all the shady businesses in town. A month later, Jefferson Randolf (Soapy) Smith arrived with his soap game. Smith challenged Ford to be the “camp boss” and Soapy won out. In June of 1892, Bob Ford was shot to death in his tent saloon by Ed O’Kelley.
Because of Bob Ford, Soapy Smith and all the saloons, gambling halls, gunfights and undesirable people and incidents, Creede got the reputation as one of the wildest boom towns in Colorado. Reportedly, at  one time there were over forty saloons in Creede.
The 1892 Colorado Business Directory stated the population of Creede as around 6,000 and close to 10,000 in the mining district. The Creede Candle newspaper reported that mine production was outstanding in 1892. The Amethyst Mine was listed as the highest producer of ore and the second highest was the Last Chance Mine.

In the first half of 1893, Creede was still booming. The boom and the excitement came to a sudden end in August of 1893 when the U.S. Congress repealed the Silver Purchase Act. When the government quit buying silver, the price of silver crashed and silver mining in all the American West was halted. The boom was over. All mines closed in Creede. Many miners left town, which caused many businesses to close and owners to leave town.
Creede was one of the few lucky silver mining towns that never became a ghost town. Hundreds of little mining towns were abandoned in Colorado during the Crash. Within a few months the larger mines in the Creede District reopened but with much smaller crews and much lower wages. The town did not die, but it certainly changed, and it has never come even close to the boom time population.
As a mining town, Creede continued to experience boom and bust times. During the boom times more people would live there, buildings would be built, schools, churches and other groups would thrive. During bust times, many would leave town, businesses would close and social groups would have fewer numbers. Of course, the price of silver was the determining factor.
At the turn of the twentieth century, Creede experienced an economic upturn. In 1905 the Humphreys Mill and the Amethyst Mill were built. In 1930 the Emperius Mining Company was founded by B.T. Poxson and Herman Emperius. By 1945 they controlled most of the mines and purchased a mill just south of town.
In the 1960s the Commodore Mine was still being worked by the Emperius Mining Company. Homestake Mining Company came to Creede in that same decade and they opened the Bulldog Mine, initiating what was to become the last silver boom in Creede. In the 1970s the population was growing so fast that mobile homes had to be brought in and almost every nook and cranny in town had a trailer in it. In the 1980s the Commodore Mine ceased operation and in 1985 Homestakes’s Bulldog Mine halted its mining, closed its doors and sold many of its buildings.
This hardy town lived through many disasters. In the 1918 flu epidemic, the only place to put the ill was on the pool tables in the bars. In 1972, the train ceased to come to Creede, usually the death knell to any community. One of the worst disasters in the history of the town happened on June 5, 1892.
Around 6 o’clock in the morning a fire started in a saloon located at the north end. In two and a half hours most of the wooden district had burned down. It devastated the town, but had little effect on the mining. Although many of the business people left town, many stayed and started rebuilding the next day. This time, most of the businesses were built with brick which was made locally. The main block of the Creede business district today is reported to look very much like the rebuilt district looked after the fire.
In the 1920s when automobiles became more affordable and popular, more tourists came to Creede. Many area ranches offered beds and food and later became dude ranches with cabins available. In town, accomodations were built for the tourists.

While we're talking about Creede (segue here) my March 28 release is set in Creede, 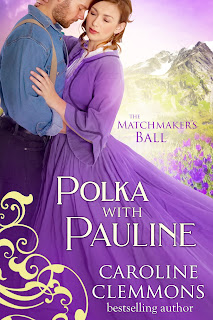 POLKA WITH PAULINE, The Matchmaker's Ball Series, book 8. It's on preorder now at the Universal Amazon url http://mybook.to/Pauline and will be available in e-book and print and free in KU.

Pauline Brubaker arrives in Creede, Colorado from Denver to help care for her aunt while the aunt’s broken leg heals. Her aunt and uncle are special favorites of Pauline’s. They’ve recently retired to Creede due to her uncle’s heart problems. Pauline’s hesitant to give in to her attraction to Creighton because she will only be in Creede the few weeks her aunt needs her help. Her parents and her life are in Denver.

Creighton Reed makes amazing pieces of furniture. They sell as fast as he can create them. Creighton meets Pauline when her aunt and the sponsor of the Matchmaker Balls conspire to have them attend a dance together. He is immediately attracted to Pauline but she gives mixed signals. Later a man who claims to be her fiancé warns Creighton away from her. Creighton tells the man he’ll believe Pauline’s engaged when she tells him.
Two fire bombs destroy Creighton’s workshop and his living quarters in the back, and he’s almost trapped inside. Fortunately, he has purchased a house in order to marry Pauline and had moved some of his things there before the fire. Who sent firebombs into his workshop?  The arsonist must be caught before Pauline, her aunt and uncle, and Creighton are safe.