Epidemics in the Old West

If you're like me, right now you are either self-isolated or you live in a state where you have been ordered to stay home. In fact, my daughter has to carry a letter from her employer just to travel to work. While I felt like the government's response to the pandemic is extreme, I changed my mind after reading about killing epidemics in the Old West.

Cholera repeatedly reared its filthy head and claimed lives. There had been a Cholera epidemic in 1832 that killed thousands in both Europe and on the North American continent. About half the population of New York City left to stay in the country while cases of the disease continued to spread.

At the time, no one understood the disease and associated it with the poorer classes. Now we know that contaminated water sources cause it to start so it makes sense that the poor who relied on those sources would be the victims. Living in the tight quarters of tenement buildings, they easily spread the disease from one person to the next.


In 1873, at least 18 states and territories, including Texas, experienced a new Cholera epidemic. Dr. J. B. Van Velson, a physician in the Dakota territory wrote that his first patients with the disease were Russians who came directly from the port in New York. Like many others of the time, the doctor believed Cholera was brought to the country by immigrants.

In the end, the epidemic that ranged across the western part of the country was so severe that Congress became involved. It authorized an inquiry into the causes of the disease. While most Americans already understood that contaminated water caused Cholera, this inquiry helped educate people on the importance of washing and disinfecting.

The idea of germs was very new. But, by studying cases, doctors realized that people who cared for victims of the epidemic stayed healthy by washing their hands and avoiding contact with the fluids produced by suffering victims of Cholera.


Dr. Worth, in charge of the inquiry, summed up his findings with one sentence. "What vaccination is to small-pox, disinfection is to cholera." https://truewestmagazine.com/the-fastest-killer-in-the-old-west/ Amazing, he got to the heart of the matter and didn't even have a microscope.

Consider that and think about 2020. It's no wonder all of the hand sanitizer disappeared first from teh shelves!

So, we aren't the first Americans to face an epidemic or to panic. I am choosing to view this as extra time to read. I hope you are, too. 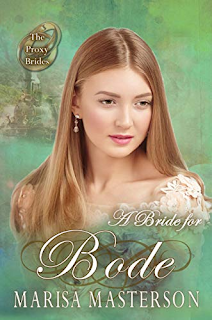 
Faced with an opportunity to prove he can be a successful businessman, Bode is desperate to buy into it the business using his inheritance. His trustee, however, won't release the necessary funds unless Bode marries that the man's choice of brides by proxy. Easy enough, Bode decides. After all, he can annul the marriage after the money is in his possession.

All thoughts of annulment disappear when he meets his less than shy or wilting Violet. But will Violet stay with him when she learns how Bode makes his living?

Why do attempts on his life start when he makes it clear to the people around him that he plans to stay married?

Labels: A BRIDE FOR BODE, cholera, disease control, epidemics, Marisa Masterson, Sweethearts of the West
Email ThisBlogThis!Share to TwitterShare to FacebookShare to Pinterest