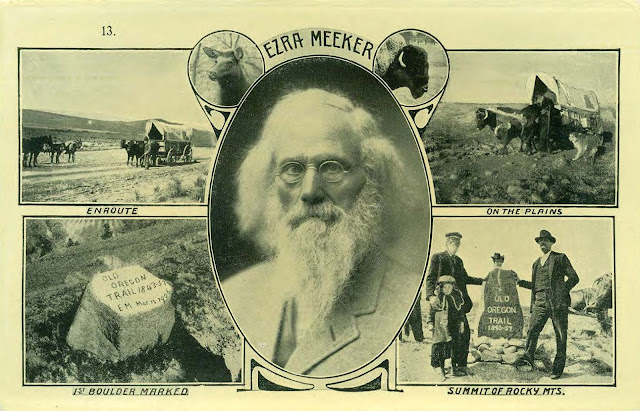 Before I tell you about Ezra Meeker (1830-1928), I would like to explain why I found his biography so interesting.

I was born in Kearney, Nebraska, located near the historic Oregon Trail. My hometown was named after Fort Kearny (spelled without the “e”), the first Army post located on the Oregon Trail that offered the emigrants a safe resting area and a chance to resupply, obtain fresh stock and send letters back to the States. 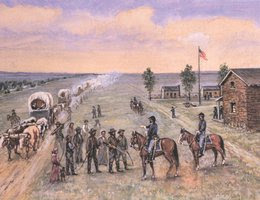 From the time I was a young girl, I was fascinated by the history of the pioneers who followed the Trail traveling in their Conestoga wagons over 2000 miles across the rugged western frontier. My continued passion for those pioneers, soldiers and Native Americans who helped create the history of America’s growth westward led me to write Book 1 of my Trails of Destiny Trilogy, entitled Trail to Destiny.

In 1852, Ohio-born farmer, Ezra Meeker, along with his young wife and infant child set out on for the Oregon Territory, where land could be claimed and settled on. Traveling by ox-drawn wagon, they endured countless hardships along the Oregon Trail on their journey, but after nearly six months, they survived their trek across the continent. After living in the Puget Sound region, they finally settled in what is now Puyallup (which he founded) in 1862. 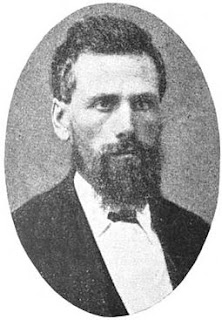 Throughout his life, Meeker had many successes and yes, failures. He had been an adventurer, farmer, surveyor, longshoreman, merchant, community leader, civic builder, the richest man in the state by growing, believe it or not, hops for the beer industry, miner and writer. He'd made millions and he'd lost millions. 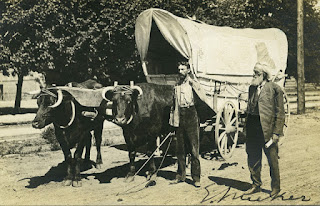 But in his 70’s, he still had dreams. He believed the Oregon Trail, and the sacrifice of those who had died along it, were being forgotten. Amid considerable publicity as one of the last survivors of the pioneers who had blazed the Trail west, between 1906 and 1908, Ezra retraced his 1852 journey. The Trail in some places had all but disappeared, replaced by farms and towns. He searched out where he had traveled and sought to have historical markers erected. 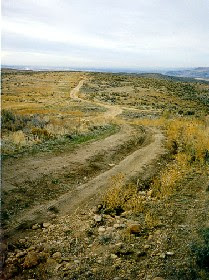 Remnants of the wagon ruts can still be seen. 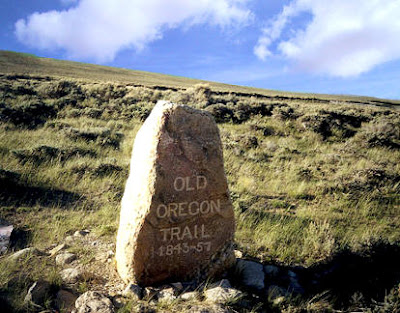 I was privileged to have seen and touched this memorial
while researching the Trail.

He took his ox team and wagon across the nation to publicize his cause, stopping in front of the White House where he met President Theodore Roosevelt. He traveled the Trail again several times in the final two decades of his life. In 1910, he and his oxen participated in the Tournament of Roses Parade in Pasadena, California. In the succeeding years, he traveled the Trail route by ox-driven wagon, a Pathfinder automobile, and at age 93, in 1924, by airplane attempting to further his cause for federal recognition and funding to memorize the Oregon Trail. Thus, he became the only know pioneer to have crossed the prairie on the Oregon Trail ox-drawn wagon, automobile … and airplane! 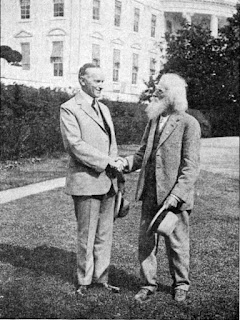 Meeker died short of his 98th birthday on December 23, 1928, in Seattle, and was taken home to Puyallup for burial beside his wife, Eliza Jane, who had died during 1909, in Woodbine Cemetery. 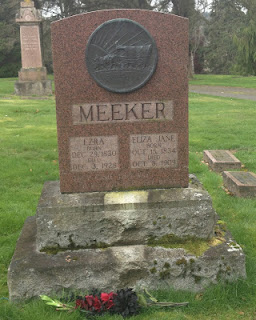 Meeker’s work has continued through the activities of such groups as the Oregon-California Trails Association. OCTA is the pre-eminent guardian and promoter of the inspirational story of the 19th century westward migration, which is unique in world history. The non-profit organization is dedicated to the preservation and protection of the overland emigrant trails, namely the three major historical trail routes to Santa Fe, Oregon and California.

May all the trails my readers travel be both safe and happy! 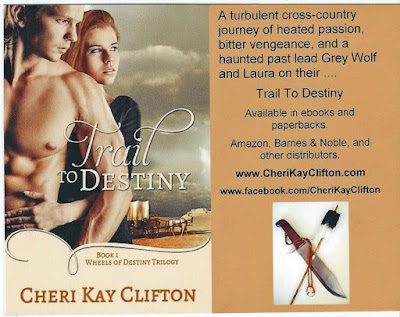