I admit it...I'm a history junkie! Particularly when it comes to the 19th century Victorian America, Civil War, and the Wild West. Honestly, if there was a time-machine that could transport passengers back to that time, I'd be the first in line.
Having just finished my entry, Ainsley - Book 8 in the Love Train series, I turned to writing Wooing the Widow, Book Two in my Mended Hearts series. Based in Roswell, Georgia during the last year of the Civil War, it tells the ordeal of Sofie Bishop who innocently takes a job in a mill producing 'Roswell grey' fabric to be sewn into Confederate uniforms.
The taking and destruction of the mill, looms, and fabric was not just a capture of infrastructure. Charging them with treason, the Union troops took about 400 mill workers, most of them women and children, to Marietta to be sent North on trains.
They spent a week in holding in Marietta before being sent North, many to Indiana, Kentucky, and Illinois on trains.  They were then left to fend for themselves in Northern towns already overcrowded with refugees. Many would die from starvation or exposure until a mill opened in 1865 that provided employment. The ultimate fates of many of these women are unknown, but the majority who survived settled in the North.  There are only a few reports of any women and children returning to Roswell.
While researching this Civil War "Trail of Tears", I came across an article about hoop skirt smugglers. Instantly, I knew I had to add a scene or two showing how some of the women might have used their skirts for a different purpose: smuggling to support the Cause. So...down the rabbit hole I went!
In a time when women had little political power, I discovered many of them eagerly joined in to not only support the troops in spirt, but took a more aggressive role in the war. From undercover spies to actual soldiers, many women considered themselves as equal participants.
Realizing their unique position as women, they used their hoop skirts for smuggling messages, weapons, and medical supplies. Despite what modern readers might view as bothersome, many women enjoyed wearing things like hoop skirts and corsets. Those who utilized them to smuggle goods reveled in the power it gave them to feel both feminine and fierce.
Belle Boyd - Siren of the Shenandoah 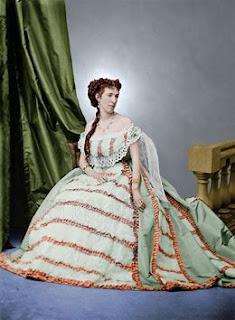 Boyd's espionage career began by chance. According to her highly fictionalized 1866 account, a band of Union army soldiers heard that she had Confederate flags in her room on July 4, 1861, and they came to investigate. They hung a Union flag outside her home. Then one of the men cursed at her mother, which enraged Boyd. She pulled out a pistol and shot the man, who died some hours later. A board of inquiry exonerated her of murder, but sentries were posted around the house and officers kept close track of her activities.
In one account, Belle organized a smuggling operation composed of other southern belles to hide weapons in their hoop skirts. While Union troop were relaxing near their encampment in Harper's Ferry, she and her belles confiscated sabers, pistols,  muskets, and calvary equipment. She also smuggled precious quinine (best treatment for malaria) across the Potomac River to secessionist towns in Maryland.
In addition to her hoop skirts, Belle used her feminine wiles to seduce both Union and Confederate soldiers, easily extracting information from the unsuspecting men who were unaware of a woman's ability to perform as a spy.
Elizabeth Van Lew
Upon the outbreak of the war, Van Lew began working on behalf of the Union with her mother, caring for wounded soldiers. When Libby Prison was opened in Richmond, Van Lew was allowed to bring food, clothing, writing paper, and other things to the Union soldiers imprisoned there.  Quickly, her efforts escalated to smuggling written messages in and out of the prison by pasting them in books, and on one occasion, she brought in coded messages in the bottom of her custard dish. Another time she brought along her knitting and intertwined messages in her stitches.
When her hostile neighbors began to attack her mental capacity because of her allegiance to the Union, she took to combing her hair crooked, wearing tattered dresses, walking the neighborhood looking generally disheveled. Given her wealth, this led to her neighbors to jump to the conclusion that she was indeed, disturbed, and hence, not a threat to the cause. 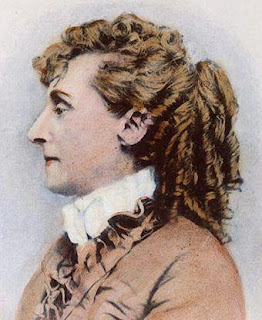 When Richmond fell to U.S. forces in April 1865, Van Lew was the first person to raise the Union flag in the city. On Grant's first visit to Richmond after the war, he had tea with Van Lew. Grant said of her, "You have sent me the most valuable information received from Richmond during the war. Elizabeth was eventually inducted into the Military Intelligence Hall of Fame.

As the daughter of a Mississippi planter, and a sister to five brothers, Emma Kline became involved in the war effort with enthusiasm. On one occasion, she managed to conceal a roll of army cloth, several pairs of cavalry boots--tied to the rolled coils of her hoop skirt--along with a roll of crimson flannel, packages of gilt braid and sewing silk, cans of preserved meats, and a bag of coffee—quite a tally of contraband for a 20-year old woman.

Eventually, the entire Kline family was exiled from the Vicksburg area by order of Major Eastman...

"I desire you to entrap and catch these outlaws, if you can. I am also well satisfied that the Kline family, and especially Miss Kline, are guilty of acting in bad faith toward our government and imparting information to the enemy. You will, therefore, take immediate steps to put the whole family across the Big Black, not to return to this side without written permission from the proper military authorities, under penalty of being dealt with as spies."

Emma Kline would be little remembered today if not for one photograph of her that was taken in 1864. It shows a defiant young lady standing between two guards from the 5th Iowa Infantry after her arrest for smuggling. 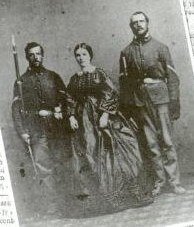 Elizabeth White, Annie Hempstone, Kate and Betsie Ball
Early on the morning of July 5, 1864, these Virginia-based Confederate sympathizers embarked on a daring mission to retrieve desperately needed boots and clothing for soldiers of the 35th Battalion who had family in Maryland. They crossed the Potomac River at Point of Rocks into Maryland.
With boots and clothing tied to the frames of their hoop skirts, they discovered Union troops guarding the crossing. They retreated to Elizabeth's mother's home where they hid the clandestine goods.
The four women were arrested as spies and sent to the Old Capitol Prison in Washington, D.C.   Though Union officials knew the women were Confederate sympathizers, they could find no evidence to support a charge of spying. The women repeatedly stated that their trip to Montgomery County, Maryland was for pleasure alone, and Union officials released them three weeks later. 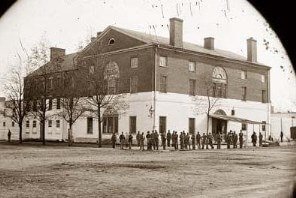 Somehow escaping detection, Elizabeth White and her comrades promptly returned to the house of White’s mother in Dickerson, Maryland and retrieved their concealed items. The return river crossing was precarious simply because of the weight of the items concealed in the folds of the women’s skirts but went off without a hitch.
These women had taken great risks to retrieve these supplies and had demonstrated their willingness to expose themselves to great danger to support their soldiers.
How to Catch a Lady Smuggler
The prevalence of female smugglers had become such a problem for the Union army that the following red flags became well-known to officers.
So, this led me to wonder... How would a male officer  prove a female was smuggling contraband?
Enter the Inspectress.
Code of morality were such at the time that conducting searches would have been too uncomfortable for most officers to bear. It would also mean putting his own reputation at considerable risk.
One aspect of my research that I hadn't expected was that the boldness of one group of women created an entirely new career for another. Since women had never been employed at the prisons, they were now brought in to conduct such searches. When the war ended, and fashion trends evolved to slimmer skirts and fitted bodices of the early 1900s the opportunity for on-person smuggling diminished.
Wait...what about the bustles of the 1870s, 1880, and 1890s?  I guess I'll have to take another trip down the rabbit hole! 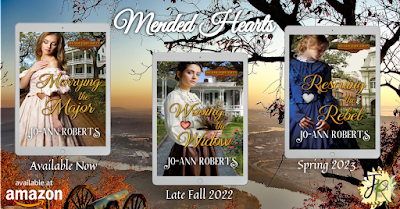 https://www.amazon.com/Marrying-Mended-Hearts-Jo-Ann-Roberts-ebook/dp/B09JFRKMHD
Posted by Jo-Ann Roberts at 5/16/2022