The Wives by Cora Leland, Author 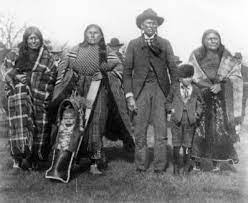 During most of the 19th century, Oglala Lakota Sioux were residents of the northern plains. Oglala Sioux men could choose to be polygamous. They could also decide to have one wife (most had single wife marriages).  Like some other tribes, the husband had the right to first choice of his wife's sisters, or he could marry all the sisters.

Oglalas saw this wife's-sister-as-wife arrangement as good for reducing jealousy in the household (sisters would 'get along' better); a polygamous marriage also allowed for the lengthy time between birth and resuming normal married life (her sisters would fill that time, by companionship with  the husband and helping the new mother with her housework and the newborn).

Like warrior chief, Crazy Horse, a man could have a wife from outside the tribe.  But before the new marriage could take place, the original wife must give her permission. Also, the new wife must bring or build a tipi of her own.

(When  Crazy Horse's wife, Black Shawl, became an invalid and their daughter died, he decided to take another wife.  He was given a French trader's daughter as a 'permanent gift.')

Wives among the Lakota Sioux could be given away by their husbands at any time and for any reason.  It was the 'highest courtesy' to give one's wife away as a gift.  She could be a temporary or permanent gift.  In my latest book, Rescuing the Indian's Bride, this does seem to happen.

Another method for getting a wife was to capture a woman. The Oglala words for a captive woman/wife are ta-winu; the words simply for 'my wife/my woman' are ta-wicu. Most of the Plains Indians captured women.

Oglala Sioux believed that women were a man's property -- period.  However, a wife could leave or even abandon her husband if he was brutal or did not provide for his family.  She could simply leave, taking her property from the marriage.  However, if her husband found her unfaithful, the village elders ruled to cut off her nose or ear, then cast her out with nothing. 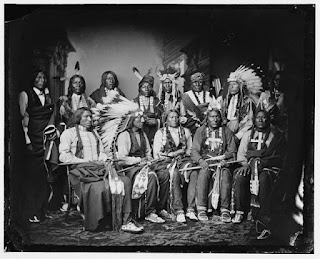 Chief Red Cloud and other Sioux

When an Oglala Sioux woman married, it was her responsibility to provide their home -- a tipi -- and she continued to own it and all the household goods.

The husband agreed, when he married, to provide fresh meat that he hunted; she agreed to cook the meat, to butcher the game he brought her, prepare the hides and sew their clothes from the animal skins.  In fact, she sewed their tipi.

Their nomadic life revolved around a Warrior Society culture.  The Warrior Society ensured that the tribe's women were properly cared for, in case their husbands were killed or injured in battle or hunting.  Hunting and war were their responsibilities. The village elders did not allow men to marry who had not proven themselves in battle.

By contrast, an authority in the 1800's wrote these glowing words.  "The Indians generally love their wives and children."  The author was director of a mission in California, Father Megin Catala.  I did not find which tribe he praised, but the Indians near his mission were the Olone tribe.

Another contrast to the portrait of the Oglala Sioux married life is that of the Iroquois.  In 1900, the Iroquois were 'scrupulously honest and chaste.'

The duties of an Iroquois wife were cooking the meat or drying it in the sun, preparing the hides from animals her husband had killed, then sewing the skins into clothing for the family.  (Needles were animal teeth or bones, sometimes pine needles.) She was responsible for growing the family's food (squash, beans, etc.) and gathering edible food like berries and roots.

She was expected to gather wood. This was 'bringing small dry twigs out of the woods.'  He wrote how yearly, the men went to the forest and chopped down trees for the entire village, then cut firewood at each home.

As far as women's rights, Iroquois wives had the same standing as their husbands.  Her many jobs, like farming and cooking and skinning animals, were considered 'light', maybe because of having such high status.

Like the Oglala Sioux, the Iroquois moved from the Mississippi woodlands when it began to fill with settlers. Both groups went to the upper plains.  The Comanche moved to the southern plains from the West.

Comanches were fierce, raiding other tribes and capturing adult women and men as slaves. But they never made children into slaves. Nor did they make the adult men into permanent slaves.  But Comanche traders, who bartered the female captives, set the harsh manners a Comanche would use toward these women.

To Comanches, behavior was everything.  If a man behaved like a Comanche and spoke Comanche, he was a member of the tribe.  Many male slaves became naturalized Comanches. However, because they'd become slaves, they did work in the village (Comanche men did not), sometimes helping the wives.

Wives wore their hair shorter than their husband; the men took pride in never cutting their hair. They wore it in two long braids, allowing it to be free during battle. (Though photos show variations.)

Marriages were arranged by accepting (using) the bride price,  five horses tied outside the girl's tipi. I could find no facts about a captive woman who became a Comanche citizen, like the men slaves, but the village elders approved of having a Comanche man taking a captive wife.

In a novel, a settler woman was taken captive, then accepted into the Comanche tribe. In reality, Cynthia Ann Parker was captured by Comanche when she was nine. She married within the tribe and had three children.  The third child was the last free Comanche chief, Quanah Parker. 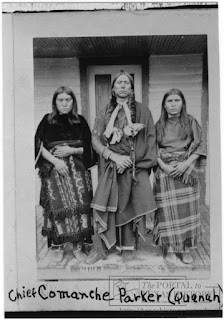