“I believe the Fourth of July will be celebrated by succeeding generations as the great anniversary festival. It ought to be celebrated by pomp and parade, with shows, games, sports, guns, bells, bonfires, and illuminations from one end of this continent to the other.”  John Adams 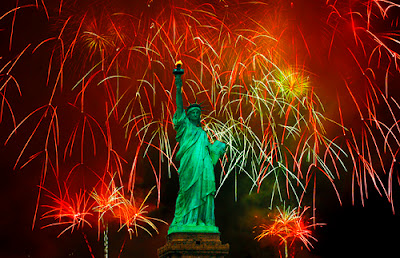 In 1777, a year after the signing of the Declaration of Independence, Philadelphia celebrated by firing guns, setting off fireworks even while the war dragged on. The tradition was widespread and was taking place throughout the war despite hard times. 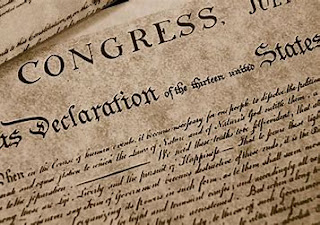 In the Old West, the 4th of July was celebrated as well. From the smallest mining camps to towns to the bigger cities, Americans had picnics and dances and gathered for speeches, rodeos, horse races, foot races, turkey shoots, and parades. Historical pageants, and later baseball games, and watermelon-eating contests added to the festivities. 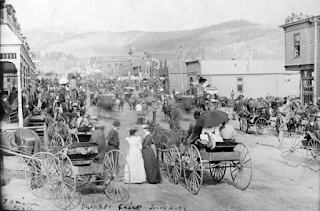 In the late 1800s, Native Americans who had pledged their allegiance to the United States celebrated the 4th of July with rodeos, pow-wows, and war dances. 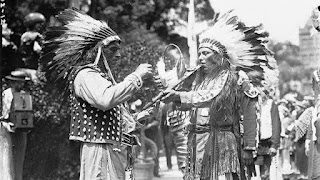 After the 1862 gold strike in Canyon City, Oregon, a typical Fourth of July celebration would have a picnic at noon, with barbecued sheep, hogs, and young steers. And the tables would be piled high with the good food prepared by excellent cooks. Townspeople would gather around a platform where the band would play patriotic selections and popular music of the day. A blessing by a preacher and a reading of the Declaration of Independence would follow. After the reading and speeches, folks spent the evening dancing the Virginia Reel, polkas, and schottische. 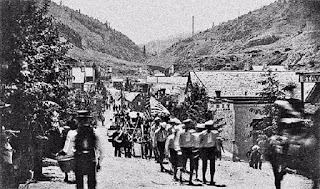 The 1820 celebration at Camp Council Bluff (now Fort Atkinson State Historical Park) in Nebraska was quite patriotic. Troops were reviewed, an oration read, a national salute was fired, and dinner guests drank toasts to President James Monroe, their country, the Declaration of Independence, and George Washington. 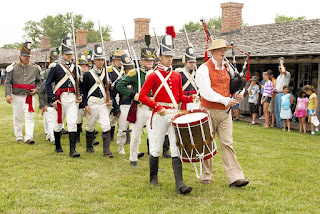 Comprised of a few hardy miners and even fewer women, the mining camps of Hamilton and Treasure Hill decided they would have a 4th of July celebration. They formed a flag committee, a music committee, and a dance committee. Since there was only one man who played the violin, and he tended to imbibe a bit too much, the miners had to regulate the flow of whiskey to the musician. 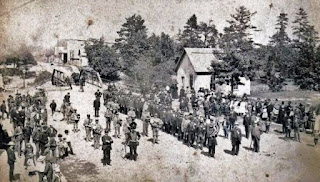 The only two women in the camp comprised the dance committee.  Because the flag committee waited too long to get a flag, they improvised using a quilt with a red lining and some white canvas material. A traveling family camped nearby had a blue veil. Luck was on the miners' side since the family included a mother and four daughters…more women for the dance. 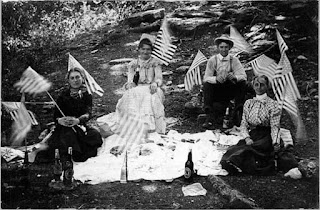 Whether it was a Nevada mining camp with a few hardy miners and even fewer women, or an Arizona town where a rodeo and a picnic was held with all of the townspeople attending, Americans old and new celebrated the Declaration of Independence in the Old West. 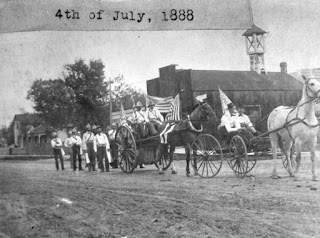 Author’s Note: I was born in the West…Western Massachusetts, that is…specifically in Pittsfield, where the Fourth of July parade has been an annual tradition since 1824. Or is it 1812? Long touted by the City Council as 1824, a local citizen doing genealogy research has suggested that the first parade occurred in 1812.

In addition to the parade, there is a drum corps competition, a baseball game at twilight, and a fireworks display. 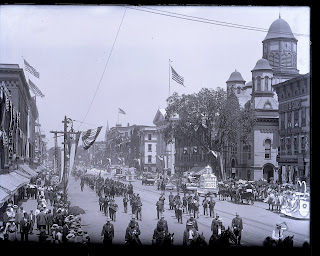 The fact that a smaller community like Pittsfield has been doing something for over 200 years is remarkable. Marching bands and fire departments from Boston and Worcester to the east; Bennington, Vermont to the north; and Torrington, Connecticut to the south are perennial favorites and come back year after year. Why? It’s watching someone’s grandfather and a seven-year-old boy saluting the flag at the same time. It’s the tradition of patriotism, pride, and respect we all share as Americans.
Posted by Caroline Clemmons at 7/16/2021