Surgery Then and Now

This topic came to mind because I’m scheduled for some foot surgery this week. I have “hammertoes” due to a genetic neuro-muscular disease. Dubbed Charcot-Marie-Tooth Disease after the three physicians who first diagnosed it in the 1880s, it causes leg muscles to atrophy (also the lower arm muscles) which, in turn, causes structural deformities such as toes that curl down and under, making them strike, or hammer, the ground with every step. Hence the funny name.

Together with extremely high arches, hammertoes are typical early signs of CMT. I was diagnosed with it at the age of nine. My right foot and hand have always been worse than my left. Several decades ago, the toes on my right foot were straightened to alleviate pain. I’ve put off fixing the problem on my left foot for years but recently decided to go ahead and have it done.

Surgery is no fun, but I have never been afraid of being “put under.” Well, I don’t enjoy having a needle inserted in my vein, but once that’s done, I’m good to go. Once inside the surgical suite, it’s quickly lights out and I don’t know anything more until I wake up in the recovery room with nice warm blankets hugging my chilled bod. (They keep it cold in surgery - to deter germs, I assume.)

There will certainly be some discomfort afterward, but my doctor has promised pain medication and a prescription for more. Oh, the blessings of modern medicine! Compare that to surgeries of yesteryear. It gives me the willies to think of being cut open back then.

William Cheselden (1688-1752,) a famed English surgeon and teacher of anatomy and surgery, who could remove a bladder stone in a minute, reportedly said he bought his reputation dearly. “For no one ever endured more anxiety and sickness before an operation!” Hmm, I bet his patients might have argued the point. 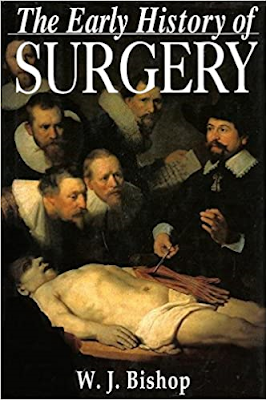 Cheselden did much to establish surgery as a scientific medical profession, although surgery was carried out in ancient times. In The Early History of Surgery by W. J. Bishop, the author writes about trephining the scull by our prehistoric ancestors. He refers to laws pertaining to the practice of surgery in ancient Babylonia and Assyria; to Egyptian surgical textbooks written around 3000 B.C.; to Hua To, the father of Chinese surgery in the 2nd century A.D.; and to Hindu surgeons who excelled at creating artificial noses centuries before modern plastic surgery.

What I found truly enlightening is that some of those ancient surgeons used anesthesia. Hua To had his patients drink wine laced with an “effervescing powder” which produced numbness and insensibility. He is said to have done  abdominal surgery, even removal of the spleen, an operation not performed in Europe until the 19th century.

Hippocrates, the Greek ”Father of Medicine”, treated every kind of malady and his writings deal with many surgical procedures. He traveled a great deal and led to the separation of medical practice from superstition and magic. He laid down rules for the arrangement of the surgery and described many instruments.

The golden age of Greek surgery was the 1st century A.D., when advances in anatomical and physiological knowledge had led to improved surgical techniques. The Romans despised medicine as a profession but made use of Greek physicians and even their slaves. In Republican Rome there is no mention of army surgeons, but later, during the Empire, every cohort had its surgeon.

Following the collapse of the Roman Empire, medicine and surgery were extensively practiced in the Arabic Empire and Byzantium (Constantinople.) But in Western Europe, little progress was made in medicine for a thousand years. With the spread of Christianity medicine became the concern of the priestly class. Disease was regarded mainly as something to be endured with patience and resignation. Priests were forbidden to practice of surgery.

What little surgical skills existed passed mostly into the hands of barbers and other uneducated men. Itinerant “operators” specialized in removing stones or cateracts or repairing hernias.

Other operations are described in surgical texts of the Middle Ages. Some contain references to anesthetic sponges prepared by soaking them in various herb concoctions. Some favorites were mandrake, opium ad henbane root. The sponge was held to the patient’s forehead and nostrils, hopefully sending him or her into a deep sleep before any cutting began.

Skipping over some of messy, obnoxious and brutal practices of this time period, let’s jump to the Renaissance, which gave birth to profound changes in medicine and surgery. In surgical practice the lack of anatomical knowledge had been a huge drawback. Dissection of the human body had been forbidden by the Church and many people were instinctively afraid of the dead. They wanted bodies buried promptly.

Then things changed. Great artists – Donatello, Michelangelo, Raphael and Leonardo da Vinci took up the scalpel to study human anatomy before beginning to paint. Leonardo produced hundreds of anatomical sketches, perhaps the first accurate diagrams of the human body. “Only the fact that the Leonardo drawings were not reproduced in book form until recent times prevents the great artist from being regarded as the true founder of modern anatomy,” says W. J. Bishop.

Renaissance surgeons also learned a great deal about wound care during the widespread wars of the period. Ambroise Paré, a one-time barber’s apprentice, became a great military surgeon, developing better, more humane treatments for gunshot wounds. He began his service career in 1536 and followed the French armies in France, Flanders, Italy and Germany for most of the next forty years.

The outstanding surgeon of 17th century England was Richard Wiseman, surgeon to James I and Charles II. His book Several Chirurgical Treatises, was the greatest work on surgery produced in English up to that time. (Chirurgical = surgical.)

I have gone far and wide from our Old West frontier because I wanted to offer you a wider view of how surgery grew and changed over the centuries. As you can guess, surgery was an agonizing affair until dependable anesthesia was introduced.

By 1831, three anesthetics had been discovered – ether, chloroform and nitrous oxide. During the Civil War chloroform became the anesthetic of choice. Other advances in the administering of chloroform and surgical techniques cam out of the war, as in every war. However, more time passed before western pioneers reaped the benefits of this developments.

I’m grateful for all the brave, determined doctors, nurses and scientists who brought us to where we are today. I will gladly put myself in my surgeon’s hands tomorrow.

Lyn Horner is a multi-published, award-winning author of western historical romance and paranormal romantic suspense novels, all spiced with sensual romance. She is a former fashion illustrator and art instructor who resides in Fort Worth, Texas – “Where the West Begins” - with her husband and three very spoiled cats. As well as crafting passionate love stories, Lyn enjoys reading, gardening, genealogy, visiting with family and friends, and cuddling her furry, four-legged babies.