Horn of Plenty in NE Oregon by Paty Jager

The Cornucopia Mine group located 12 miles west of Halfway Oregon in the Wallowa Whitman National Forest was once one of the 6 largest gold mines in the United States. It ran the longest continually of any mine in Oregon. It had 36 miles of tunnels with a depth of 3,000 feet.

It’s believed the mines output was $20 million from gold, silver, lead, and copper.

The mining area began when Lon Simmons one of the first to discover gold in the early 1880’s. It’s said he hadn’t planted the first stake of his section before men were all over the side of the mountain looking for gold.

There were many small mines in the area. The Cornucopia Mine group was made up of Union-Companion Mine(the biggest), Last Chance, Queen of the West and Red Jacket.

Last Chance was a pocket mine. Meaning it was a dense accumulation of ore that was under the surface and down to the bedrock and perhaps in the bedrock. While the other mines were dredged and drilled.
Union-Companion produced the most and was said to be on the mother lode. This means it was located on a vein of the ore it produced.

The mines were so remote they used outdated equipment and methods to extract the ore. Only horses and wagons were used for transportation. The first few years were a slow process of not only getting the ore out of the ground but also delivering it to a railroad station. Baker City was the closest and it was a 3 day trip.
They still used teams of horses to haul the heavy wagons in the 1920’s. In 1922 electricity came to Cornucopia. With it came a twenty-stamp mill.  The heavy stamps were like huge 1,000 to 2,000 pound hammers which could crush 60 tons of ore a day.

It wasn’t until the railroad came to Robinette on the Snake River, electricity and the pneumatic drill that finally had the mines producing to their fullest potential.

During the years the mines operated the price of gold was from $20.67 to $35 a troy ounce.

High graders were men who worked at a mine and somehow or another, nuggets of pure gold found their way into their shirts and boot tops. Many nationalities worked at the Cornucopia mines. Being as remote as it was the miners had to create their own fun. They had Saturday night dances. Anyone who could play an instrument was included in the band ensemble for the dances.

A shift was 10 hours in the mine and 12 in the mill. They worked 7 days a week, so holidays were well-earned. They celebrated Christmas and the Fourth of July. Then when Labor Day was recognized as a holiday in Oregon in 1887 they relished that holiday.  The city ordinance of Cornucopia only allowed saloons to serve beer. But when there was a holiday it brought in ranchers, townspeople, the miners and the millworkers. And someone would bring along some “tangle leg”. A mixture of Pine Creek water and corn squeezins. "It’s said a few drops would turn a squirrel into a screaming panther."

While I didn’t have any dances or holidays in my book, Isaac: Letters of Fate, you will find the mining area of Cornucopia. Isaac is a mine guard at the Union-Companion at the start of the story. 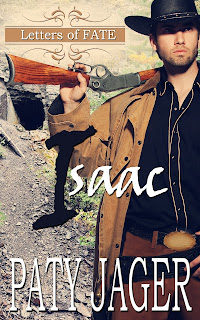 Historical western filled with steamy romance and the rawness of a growing country.

Alamayda Wagner’s life has left her cynical, but also vigilant, and that’s what propels her to Cornucopia, Oregon to uncover the secrets her father took to his grave. She quickly discovers her only hope includes trusting Isaac Corum. That soon proves to be expensive, and not just financially.

The last thing Isaac Corum needs or wants is a snooty woman telling him he didn’t do enough to save her father, which is what her letter implied. He’d helped the man more than most people would have, and swears he won’t go out of his way like that again. He’ll meet her at the Baker City train station, deliver her father’s belongings, and send her back the way she came.
universal buy link:  https://www.books2read.com/u/mVBAjl

Paty Jager is an award-winning author of 32 novels, 8 novellas, and numerous anthologies of murder mystery and western romance. All her work has Western or Native American elements in them along with hints of humor and engaging characters. This is what readers have to say about the Letters of Fate series- “...filled with romance, adventure and twists and turns.” “What a refreshing and well written love story of fate and hope!”
blog / website /  Facebook / Paty's Posse / Goodreads / Twitter / Pinterest / Bookbub

I used the book Oregon's Golden Years by Miles F. Potter for all the information for this post.
Posted by Paty Jager at 8/25/2018