While doing some research for my current WIP, I came across this article I wrote for an earlier book in that particular series, and thought it would be fun to share here. My characters usually travel by horseback or on foot through the remote mountains of the Rockies, but for my book, Teton Splendor, I needed them to travel part-way via steamboat up the Ohio River. I never thought I'd have to revisit that again, but now that I'm working on another book in the series, I found myself revisiting this method of transportation.

Before the railroads took over as the fastest way to travel west, steamboats were the premier  mode of transportation along the Mississippi River and its tributaries. In the 1820’s and 30’s, steamboats were mainly used to transport furs, lead, and army supplies to forts and encampments along the Mississippi. In the late 1840’s, settlers swarmed into the new Minnesota Territory, and for the first time, entire families could travel together.

Early settlers, however, usually did not get to travel in luxury. Only the wealthy could afford the luxurious accommodations that were available on the finer steamboats. The average settler had few comforts. The poorer passengers slept on the freight decks, which also housed the boiler, fuel, and cargo. There was little or no protection from the elements for deck passengers, who would sleep on cargo crates or bales. They were allowed to cook their own meals using stoves provided by the captain. However, it was often too crowded to even prepare a simple meal.  Otherwise, they could eat with the crew if they paid the cook. Those who could afford the price could travel on the upper deck in private cabins. These passengers ate their meals in the state room, and were entertained in the grand salon. Some of the finer steamboats featured grand salons that ran the entire three hundred foot length of the boat, and were considered floating palaces, with heavy wood furniture, gilded ceilings, and mirrored walls. Dining experiences rivaled the best restaurants in New York at the time. Some boats had bands or musical entertainment, and even theater performances. 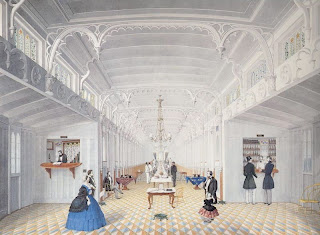 Traveling by steamboat was not without danger, however. Deck passengers were in constant danger of boiler explosions, or being shoved overboard. Boiler explosions were common and often disastrous. Boats were often caught on sandbars or snags, and many times the passengers were asked to get off the boat to lighten the load. Captains didn’t always return for their passengers in those instances. And, of course, the river was teeming with thieves who loved to prey on unsuspecting passengers.
Overall, steamboat travel was preferred to overland travel for its speed (up to eight miles per hour!) and comparative luxury, until the railroad’s influence in the 1860’s and 70’s.

Peggy L Henderson is an award-winning, best-selling western historical and time travel romance author of the Yellowstone Romance Series, Second Chances Time Travel Romance Series, Teton Romance Trilogy, and the Blemished Brides and Wilderness Brides Western Historical Romance Series. When she’s not writing about Yellowstone, the Tetons, or the old west, she’s out hiking the trails, spending time with her family and pets, or catching up on much-needed sleep. She is happily married to her high school sweetheart. Along with her husband and two sons, she makes her home in Southern California.