Necessity is the Mother of Invention

Often, by the time the immigrants arrived at their destination, they were dire straits.  Their provisions were gone, their money was low and winter was setting in.  In many cases, the women who started out with a husband arrived a widow.

Lucinda Cox Brown left Illinois in 1847 and traveled with her husband, three small children, her father and his children and an uncle and his family. Her husband, Elias, took ill half-way through the journey, probably with typhoid and died.  I’m sure her extended family helped Lucinda make the rest of the trip to Oregon.  Once she arrived though, she was destitute, owning only the clothing she and her children wore.  With three children to feed and shelter, she made clothing and caps during the winter. The following spring and summer, she plaited wheat straw and made hats trimmed with ribbons.  They were a huge hit with the women in the area and Lucinda not only supported her family with her earnings, she made enough money that she was able to obtain a homestead in 1849.  She remarried two years later and had several more children.  It is not known if she continued to make hats after she married, but her innovation kept herself and her children from starving.

I’ve discussed Tabitha Brown in a previous post (find it HERE) and mentioned this already, but Tabitha’s story didn’t end with her arrival in Oregon.  Tabitha started the journey in her sixties, already a widow.  Her older brother-in-law traveled with her and Capt. John Brown took sick on the trip.  They arrived at the end of the trail much like, Lucinda, with only the clothes on their backs.  It was then that Tabitha discovered that what she thought was a button at the end of a glove’s fingertip was really a six-and-one-fourth cent piece.  She used the meager amount to “purchase three needles and traded off some of my old clothes to the squaws for buckskin, and worked it into gloves for the Oregon ladies and gentlemen.” During her first winter, she profited $30. 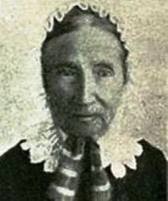 Tabitha’s story doesn’t end here either, and though I’m more set to discuss those women who survived by gumption, I’ll tell the rest of her story.  In October 1847, while visiting her son on the West Tualatin Plains, (now called Forest Grove) she met the Reverend and Mrs. Harvey Clark, missionaries in the area. She also learned that many children were left orphaned on the trail.  She was moved by this revelation and asked The Reverend Clark “Why has Providence frowned on my and left me poor in this world? Had He blessed me with riches as He has many others, I know right well what I should do. I should establish myself in a comfortable house and receive all poor children and be a mother to them.”  Believing in her sincerity, Rev. Clark provided her with the means to start up a school for orphans.  In the Spring of 1848, Tabitha “found all things in readiness for me to go into the old meetinghouse and cluck up my chickens for the next Monday morning.” The first school in the territory to board children, local families also sent their children to be educated. Those who could afford it paid a dollar a week per child.  By 1851, her ‘family’ had 40 people at Tualatin Academy.  In 1854, the territorial legislature altered the academy’s charter to provide for the creation of Pacific University.  The academy and the college thrived under Tabitha’s tutelage. The growth of a local public high school caused the Tualatin Academy to be closed in 1915 and Pacific University stood on its own -- a pioneer institution of higher education. Tabitha died in 1858 and is buried in the Pioneer Cemetery in Salem, Oregon.

Luzena Stanley Wilson learned her first day in a California gold mine town what she was worth…or rather what her cooking was worth. Luzena, her husband Mason and their two young sons left Missouri in 1849 in search of riches in the gold fields where gold “lay in the creeks and mountain valleys, ready to be scooped out with just a spoon.”  A few months later, they had crossed the plains, mountains and valleys, “plodding, unvarying monotony, vexations, exhaustions, throbs of hope and depths of despair” to arrive in Nevada City, California.  After scrubbing her boys back to their natural hue, Luzena set about fixing supper.  A man approached and offered her $5 for biscuit.  Before she could answer, he upped the offer to $10 (about $250 in today’s dollars).  No fool, she took the money and realized where her value lay.  She studied the market and discovered that the local hotel charged a $1 a meal.  As Mason searched for gold, Luzena set up a restaurant, chopping the steaks and planks for tables herself. Her husband arrived back home, weary and worn one evening to see 20 men eating dinner his wife had cooked, each paying a $1 for the meal. Less than two months later, she had saved over $700 and calculated what to do with her profit. With Mason’s help, they built a bare wooden building and served between 75 to 200 boarders a week.  Her reputation for clean beds and good food drew in the customers.

Eventually, the Wilsons built a store and a bank.  But all their ventures, hotel, store and bank were destroyed in a fire that swept through Nevada City.  The family was left with the clothes on their backs and $500, a very small amount considering at one time, Luzena had stashed over $200,000 in her bedroom.  The family sold their plot of land and moved on to Vaca (later to become Vacaville….a town I lived in as a toddler).  There they started over and eventually became substantial land owners. Twice more, Luzena lost her businesses to fire, but each time, she recovered and survived.  Luzena died in 1902 in San Francisco.

Mrs. A. B. Eaton opened her door in San Francisco one day to find a distraught young lady who had just landed in the port city after a journey around Cape Horn from the east.  Her brother was supposed to meet her, but he wasn’t there when the ship arrived.  The girl was in a strange town with no one to help, but turned to the woman with a kind face.  This encounter led Mrs. Eaton to establish, with the help of churchwomen from various denominations, the Ladies Protection and Relief Society, dedicated to rendering “Protection and assistance to strangers, to sick and dependent women and children."  The organization provided an orphanage and temporary shelter to women in need.

Women did what they had to do to survive in the harsh new land.  If they could cook, they served food, they built hotels or boarding houses or they did laundry. The men may have left the East in search of fortune, but, as it turned out, they really didn’t want to leave civilization.