Detainment of American Citizens in the West

Detainment of American Citizens In The West

During World War II, between 1942-1946, Americans became suspicious of their neighbors, Japanese citizens of our country, because the citizenry believed the Japanese might have sympathies to their homeland of Japan, after the bombing attack on Pearl Harbor. Well, considering that Americans are a blend of just about every country on Earth, I found this piece of history particularly grievous. Unfortunately, this fear caused innocent people to suffer and to live in Internment Camps sprinkled across the western United States. This could be considered profiling at its worst. 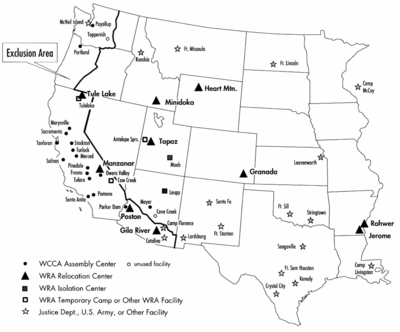 By Executive Order 9066 on February 19, 1942, President Franklin D. Roosevelt authorized local military commanders to designate "military areas" from which "any or all persons may be excluded." 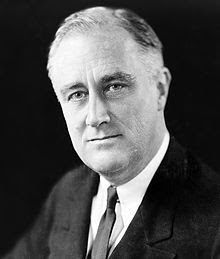 This power was used to declare that all people of Japanese ancestry were excluded from the entire West Coast, including all of California and much of Oregon, Washington and Arizona, except for those in government camps. Approximately 5,000 "voluntarily" relocated and some 5,500 community leaders were arrested after Pearl Harbor and were already in custody. The majority of mainland Japanese Americans were "evacuated" from their West Coast homes over the spring of 1942. The United States Census Bureau assisted the internment efforts by providing confidential neighborhood information on Japanese Americans. The Bureau denied its role for decades, until 2007 when it was proven to be true. How frightening to learn that the Supreme Court of these United States. in 1944, upheld the constitutionality of the removal when Fred Korematsu's appeal for violating an exclusion order was struck down. The Court limited its decision to the validity of the exclusion orders, avoiding the issue of the incarceration of U.S. citizens. Doesn’t that make you wonder how our Constitution can be so loosely interpreted?

Just to be clear, most of these Japanese Americans were second and third generation Japanese. Included in this scandalous act were Italian Americans and German Americans.

Major Karl Bendetsen and Lieutenant General John L. DeWitt, head of the Western Command, each questioned Japanese American loyalty. DeWitt, who administered the internment program, repeatedly told newspapers that "A Jap's a Jap" and testified to Congress, “I don't want any of them [persons of Japanese ancestry] here. They are a dangerous element. There is no way to determine their loyalty... It makes no difference whether he is an American citizen, he is still a Japanese. American citizenship does not necessarily determine loyalty... But we must worry about the Japanese all the time until he is wiped off the map.” 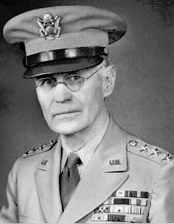 March 27, 1942: General DeWitt's Proclamation No. 4 prohibited all those of Japanese ancestry from leaving "Military Area No. 1" for "any purpose until and to the extent that a future proclamation or order of this headquarters shall so permit or direct."

May 3, 1942: General DeWitt issued Civilian Exclusion Order No. 34, ordering all people of Japanese ancestry, whether citizens or non-citizens, who were still living in "Military Area No. 1" to report to assembly centers, where they would live until being moved to permanent "Relocation Centers." 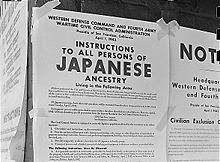 Notice to Japanese Americans and Instructions for Relocation

These edicts included persons of part-Japanese ancestry as well. Anyone with at least one-sixteenth (equivalent to having one great-great grandparent) Japanese ancestry was eligible. Korean-Americans and Taiwanese, [citation needed] considered to have Japanese nationality (since Korea and Taiwan were both Japanese colonies), were also included. 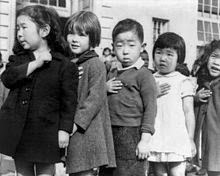 Austin E. Anson, managing secretary of the Salinas Vegetable Grower-Shipper Association, told the Saturday Evening Post in 1942:"We're charged with wanting to get rid of the Japs for selfish reasons. We do. It's a question of whether the white man lives on the Pacific Coast or the brown men. They came into this valley to work, and they stayed to take over... If all the Japs were removed tomorrow, we'd never miss them in two weeks, because the white farmers can take over and produce everything the Jap grows. And we do not want them back when the war ends, either." 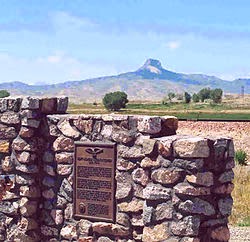 Can you imagine what kind of press these declarations and presumptions would make in today’s news? Fear and hatred can cause people to say and do the most horrendous things.

After the dust settled from World War II and people began to reconsider how the Japanese American were treated, the government made laws protecting American citizens.

Beginning in the 1960s, a younger generation of Japanese Americans who were inspired by the Civil Rights movement began what is known as the "Redress Movement," an effort to obtain an official apology and reparations from the federal government for interning their parents and grandparents during the war, focusing not on documented property losses but on the broader injustice of the internment. The movement's first success was in 1976, when President Gerald Ford proclaimed that the internment was "wrong," and a "national mistake" which "shall never again be repeated"

The campaign for redress was launched by Japanese Americans in 1978. The Japanese American Citizens League (JACL) asked for three measures to be taken as redress: $25,000 to be awarded to each person who was detained, an apology from Congress acknowledging publicly that the U.S. government had been wrong, and the release of funds to set up an educational foundation for the children of Japanese American families. 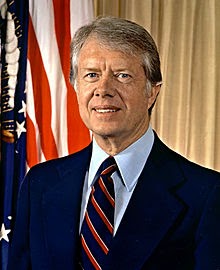 In 1980, under mounting pressure from the Japanese American Citizens League and redress organizations, President Jimmy Carter opened an investigation to determine whether the need to put Japanese Americans into internment camps had been justified by the government. He appointed the Commission on Wartime Relocation and Internment of Civilians (CWRIC) to investigate the camps. The Commission's report, titled “Personal Justice Denied,” found little evidence of Japanese disloyalty at the time and recommended the government pay reparations to the survivors. On February 24, 1983, the commission issued a report entitled Personal Justice Denied, condemning the internment as unjust and motivated by racism and xenophobic ideas rather than real military necessity. The Commission recommended that $20,000 in reparations be paid to those Japanese Americans who had been victims of internment. 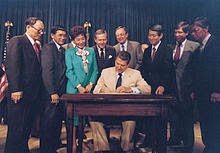 U.S. President Ronald Reagan signed the Civil Liberties Act of 1988, which had been sponsored by Representative Norman Mineta and Senator Alan K. Simpson – the two had met while Mineta was interned at Heart Mountain Relocation Center in Wyoming. The Act provided redress of $20,000 for each surviving detainee, totaling $1.2 billion. The question of to whom reparations should be given, how much, and even whether monetary reparations were appropriate were subjects of sometimes contentious debate. 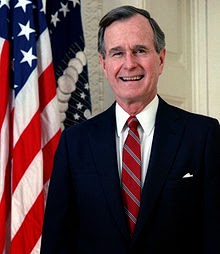 On September 27, 1992, the Civil Liberties Act Amendments of 1992, appropriating an additional $400 million to ensure all remaining internees received their $20,000 redress payments, was signed into law by President George H. W. Bush, who also issued another formal apology from the U.S. government on December 7, 1991, on the very day of the 50th-Anniversary of the Pearl Harbor Attack: "In remembering, it is important to come to grips with the past. No nation can fully understand itself or find its place in the world if it does not look with clear eyes at all the glories and disgraces of its past. We in the United States acknowledge such an injustice in our history. The internment of Americans of Japanese ancestry was a great injustice, and it will never be repeated." 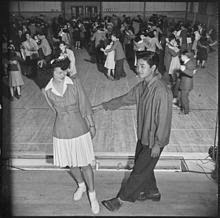 Detainment at Heart Mountain, Wyoming at a Dance

Some Japanese and Japanese Americans who were relocated during World War II received compensation for property losses, according to a 1948 law. Congress appropriated $38 million to meet $131 million of claims from among 23,000 claimants. These payments were disbursed very slowly. The final disbursal occurred in 1965.  In 1988, following lobbying efforts by Japanese Americans, $20,000 per internee was paid out to individuals who had been interned or relocated, including those who chose to return to Japan. These payments were awarded to 82,210 Japanese Americans or their heirs at a cost of $1.6 billion; the program's final disbursement occurred in 1999.

Under the 2001 budget of the United States, it was also decreed that the ten sites on which the detainee camps were set up are to be preserved as historical landmarks: “places like Manzanar, Tule Lake, Heart Mountain, Topaz, Amache, Jerome, and Rohwer will forever stand as reminders that this nation failed in its most sacred duty to protect its citizens against prejudice, greed, and political expediency”.

On January 30, 2011, California first observed an annual "Fred Korematsu Day of Civil Liberties and the Constitution", the first such commemoration for an Asian American in the U.S. On June 14, 2011, Peruvian president Alan García apologized for his country's internment of Japanese immigrants during World War II, most of whom were transferred to the United States.

The United States is a relatively young country. We’re still working things out to allow all of our citizens to receive fair and equal treatment, in wartime and in peace. Although it is disturbing to learn that these terrible things were done and that we still don’t have a perfect government, I am hopeful that we can get our act together and find ways to allow everyone in this country the freedom and civil liberties they deserve. 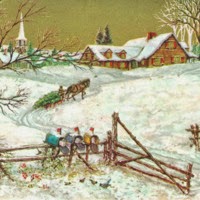 Before I go, I wanted to lift the mood a touch and wish you all a very merry Christmas and a New Year filled with love, prosperity, and happiness! 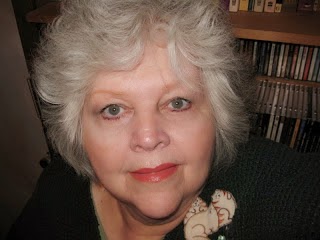 is a multi-published author of several genres including time travel, paranormal, western and historical fiction. She is a retired ER nurse who lives in North Carolina with her four-legged children, Lily, the Golden Retriever and Liberty, the cat. Besides her devotion to writing, she also has a great love of music and plays several instruments including violin, bagpipes, guitar and harmonica. Her books and short stories may be found at Publishing by Rebecca Vickery, Victory Tales Press, Prairie Rose Publications and Painted Pony Books, and Fire Star Press, imprints of Prairie Rose Publications. She welcomes you to her website at
Website
My Amazon Author’s Page
Facebook
Twitter