How, you might ask. Simple. Just take off your clothes. That is if you were living in the mid 1800’s. A woman’s ensemble could easily weigh over twenty-five pounds—not including socks, shoes, overcoat/cape, hat and gloves.

Their outfits usually started with the tight corset (also known as stays) which, by the way, was claimed to ‘provide even the stoutest of women a healthy option to control the shape of her body’. Along with the corset, add at least two petticoats, drawers, a chemise, crinoline, and bustle with cover, a corset cover, the ever fashionable hoop skirt, which was made with thick, heavy wire so it wouldn’t lose its shape, and then over all of this came the dress, (these were often made of heavy cottons, brocades, and wools). 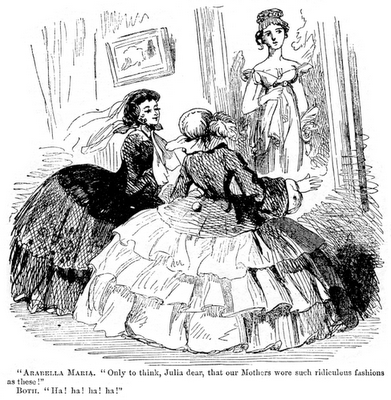 In the 1860’s the popular, huge hoop skirts limited movement and sitting to the point at some social events, woman stood for the entire evening. No wonder the ‘vapors’ set in! (Women would soak a small sponge in vinegar and conceal it in their handkerchief to sniff when they grew lightheaded to keep from fainting.)

With the popularity of the home sewing machine, patented in the U.S. in 1848, and then the invention of paper patterns in the 1860’s, came infinite changes in apparel, both for men and women. The ability to mass produce clothing provided accessibility to a much larger array. Synthetic dyes were also becoming more popular, which provided bold, vibrant colors. The Civil War and the western land runs also changed fashion. During this time the simpler clothing worn by the ‘working’ class became more popular, especially in the south and west. Laboring in the plantation fields and/or walking for up to forty miles a day beside a covered wagon, women quickly discarded layers and the more constricting garments.  Until then most of the fashions came from overseas, and filtered through the U.S. by way of New York, but the gold rush in California quickly increased the population of the western U.S. shore and the women there, being outnumbered by men two to one, had the power to instill new fashion trends.

We often think of split skirts for horseback riding, but it wasn’t until the bicycle increased in popularity that split skirts and bloomers became popular. The trend started in San Francisco where women started to ‘shorten’ their skirts to ride bike. This is also where the ‘General Association for the Simplification of Women's Clothing’ was founded in 1896.

www.laurirobinson.blogspot.com
Posted by Lauri at 8/24/2012