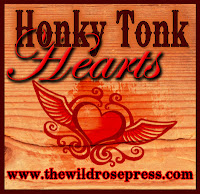 Lonely hearts seem to gravitate to the Lonesome Steer Honky Tonk. A few miles outside Amarillo off historical Route 66, the large wood-paneled structure boast a large neon star with a single flashing steer riding away from it. Owner and bartender, Gus Rankin, has seen his share of the wandering souls cross his bar and dance floor over the years—he’d even like to think he helped a few find true love along the way.

Greeting, ladies! I'm very happy to host you on Sweethearts of the West. It's very nice that I know all of you and something about your writing, too. But I'm wondering if you've been in a Honky Tonk. I'm an old hand at CW dancing in Texas Honky Tonks--back in the 80s! The Crystal Chandelier where I saw George Strait before he hit it really big; No Whar But Texas in Dallas; The Wagon Wheel, and nearby Gruene Hall, the Oldest Dance Hall in Texas. The atmosphere is basically the same in all of them. Celia

1. So, what is your experience with Honky Tonks, and how much of that is in your story?
Jannine Gallant: Celia. I’m a California girl, so I’ll be the first to admit I haven’t any experience with Honky Tonks. Nothing But Trouble includes two scenes that take place in the Lonesome Steer – one in the morning when it’s closed and a second on Karaoke night. I figured Karaoke is much the same in Texas as it is in California!

Lauri Robinson: I’ve only seen honky tonks in movies and the famous Bird Cage in tombstone.  So for Sing to Me, Cowboy, it was largely research and imagination and the sketch for the series.

Sherri Thomas: I love the music and line dancing associated with Honky Tonks. There is some dancing in Lost Memories.

Vonnie Davis: Celia, I’m a Honky Tonk virgin. But Stacy, editor of our series, gave us a great description of both the interior and exterior of The Lonesome Steer, which was a great kicking off point for my story Those Violet Eyes. As a dancer, I can do the Texas-two-step, having taken lessons in Pennsylvania where I was living at the time. So, (author blushes) guess you could say I do the Yankee-Texas-two-step.

Donna Michaels: Hi, Celia! Thank you so much for having us here today. As for experience in Honky Tonks, I used to frequent ‘Emma’s On The Trail’ where we’d go to eat and dance to a live band, but unfortunately it disappeared with one of our floods. Most of COWBOY-SEXY (release date 1-02-13) takes place on a ranch, so not much of my Honky Tonk experience went into my story.

Brenda Whiteside: Phoenix, Arizona certainly has its share of honky tonks. I have to admit I’ve two-stepped through a few of them. But I’m not part of my story. I do think my western upbringing helped me tell an authentic story.

I love the blurbs and excerpts of all your stories.
2. Where did you get your ideas for your hero and heroine?

Sherri: Nick and Darcy originated from a combination of country songs. They started off as very vague characters. It was more the scene that developed first.

Vonnie: My hero, Win, roared into our bedroom on his Harley. I’d been struggling with a scene in a book set in Paris and was a little miffed with my French hero. Believe me, the last thing I needed was another man invading my mind. But Win charmed me with his polite Texan twang and those soulful hazel eyes. I knew in an instant he was a wounded war vet. As for Evie, she just stomped into my mind in those pink cowgirl boots, crossed her arms and announced she wasn’t taking any of Win’s guff. All righty then…

Donna: My husband is career military and I wanted to capture some of the issues they have to deal with when they come home. So, when Stacy told me about this series, I knew I wanted my cowboy to be military, too. Then I thought, heck, I’m going to have my heroine in there as well. And what better way to add tension then to put them in different branches. Viola! COWBOY-SEXY was born. The characters seriously wrote themselves.

Lauri: With a honky tonk as the setting, a Honky Tonk Man was perfect.  I didn’t want Sunny to be the usual rancher’s daughter so I had her come on scene as a waitress, which set the story up for misadventure.

Jannine: My story evolved out of my vision of the opening scene. Honor is stranded on Route 66 outside the Lonesome Steer. Chase offers her a ride. She takes one look at him and knows he’s nothing but trouble.

Brenda Whiteside: Most of my stories prior to this novella had parts of people I have known. This is one of the few times I can say they are both totally out of my imagination.

~*~*~*~*~
Evie Caldwell hates her life. Five years ago, she gave up college and her dream of teaching to care for her ailing mother. Now, she's trapped taking care of her worthless brother and the family ranch. Waiting tables to earn her way out of Texas, the last thing she wants is a muscleman with a macho Marine attitude complicating her life. But, oh, how that man makes her insides melt.
Wounded vet Win Fairchild returns to Texas to heal, find a piece of his soul, and open a ranch for amputee children. Finding someone to love is not on his agenda. But when he starts work at the Lonesome Steer Honky Tonk, a spitfire with violet eyes and a major attitude instantly captures his heart.
Evie just wants to escape, but now that Win knows what he wants, can he convince Evie to stay in Texas—and his bed?

Heather Gibson's past catches up with her one dark Texas night.
Locked in a custody battle with an ex-husband who's looking for any excuse to take her children, Heather doesn't need any more trouble. But when a broken-down car and a dead cell phone leave her stranded at the Lonesome Steer Honky Tonk, she comes face-to-face with the one man who could jeopardize everything—including her heart.
Country-singing sensation Lance Dugan is back in Amarillo for his grandfather's birthday and to take care of a bit of unfinished business—apologize to Heather for leaving ten years ago. Lance has fought hard and won big the last few years, but seeing Heather again makes him wonder if he's been fighting for the right things.
Finding each other again may seem like fate, but one horrible secret, buried deep, could divide them forever.

Chase Paladin avoids commitment like a patch of stinging nettles. He's seen how love can trample a man, and he doesn't plan to get hitched—ever. But when Honor Jackson walks into his life, hell-bent on keeping her distance, she turns his convictions inside out.
One look at the too-handsome cowboy with laughing green eyes and a killer smile, and Honor knows he's nothing but trouble. She's come to Redemption, Texas to help an old friend, not to let another man charm her into certain heartache.
But every time she turns around, Chase is there, and the closer they get, the more she fears he'll break her heart. So when anonymous threats make it clear that someone in Redemption wants her gone, Honor is ready to oblige. Only now Chase isn’t certain he can live without her.
Will two wary hearts take a chance on love before it's too late?

Can there really be love at first sight?
Abigail Martin doesn't think so. Unless the sexy red-headed stranger she wakes up with the morning after her best friend's wedding is telling the truth.
Bobby Stockwood fell cowboy-hat-over-boot-heels for the brown-haired beauty, and married her in an impromptu wedding ceremony. Now he just has to convince his new bride that the morning after can be the first day of the rest of their lives.
But just when Abigail starts believing the fairy-tale is real, she finds out exactly who Bobby is, and the walls of make-believe start crumbling down.


Finn Brennan is used to his brother playing practical jokes, but this time he's gone too far--sending Finn a woman as a ranch hand. And not just any woman, but a Marine. When 1st Lt. Camilla Walker's commanding officer asks her to help out at his family's dude ranch until he returns from deployment, she never expects to be thrust into a mistaken engagement to his sexy, cowboy twin--a former Navy SEAL who hates the Corps. But before long, Cammie is wishing their fake engagement could be real. The Corps took Finn's father, his girlfriend, and threatened his naval career. He's worked hard for another shot at getting back to active duty. The last thing he needs is a headstrong, unyielding, hot Marine who not only tempts his bed, but soon has him rethinking his goals.
When your past is a blank, it’s hard to trust the future…
A car accident leaves Darcy Brooks with amnesia, but she’s determined it won’t ruin her life. She finds a job on a dude ranch—hiding her brain trauma to get it—and falls in love with her work. Now if she can just avoid falling in love with her boss.
Nick Matthews knows his new employee is hiding something, and he’s determined to discover what. He’s failed to protect his family from disaster in the past and won’t let it happen again. Now if he can just keep his attraction to Darcy from clouding his judgment.
Nick soon comes to value Darcy as an employee and a friend—even as the heat between them builds. But when a man claiming to be Darcy's husband shows up, Nick realizes just how much he wants to keep Darcy for himself.

~*~*~*~
Authors, thank you so much for your answers. All the books sound like great stories, and the covers are outstanding, as The Wild Rose Press usually does. Congratulations to you all.
Readers: Please visit The Wild Rose Press, Amazon, B&N, and Fictionwise
Posted by Unknown at 8/22/2012