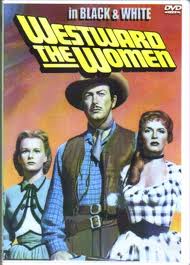 Since we've talked about mail-order brides and wagon trains, I remembered the 1951 movie Westward the Women. I've watched it numerous times over the years, and would probably watch it again if TCM featured it. While it might be a little hokey and simplistic compared to today's movies, this one was a real groundbreaker.

The idea for Westward the Women came from Frank Capra, who in the 1940s read a magazine article about South American women crossing the Isthmus to become brides for a colony of male settlers. What if he moved this event to the American West, the director wondered. Capra had always wanted to make a western, but Columbia wasn't making them at the time and so he put the idea aside. 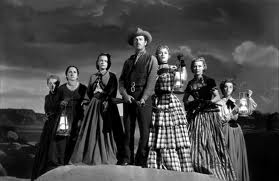 Then one day he and a friend took the idea to MGM. The company gave it the green light. Venerable MGM leading man Robert Taylor was cast as the scout. He escorts a wagon train of 150 women from Chicago to John McIntire's ranch in California, where there are no women for the male workers in a valley McIntire wants populated with familes. Along the way, the women must fend off Indian attacks, rough weather, forbidding landscapes, and men hired to accompany the group who are unable to control their lust. 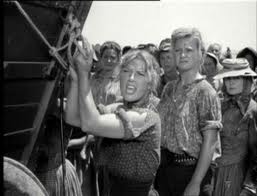 Before production started on Westward the Women, all the actresses were gathered together to learn what they were getting themselves into—much like Taylor does in the movie. They were told that there would be no room for prima donnas, for the 11-week schedule in the Utah Mountains and California desert would prove to be long, dirty, and tiring. He offered everyone a last chance to back out, but no one did. The women began a three-week period of basic training which involved calisthenics, rope skipping, softball, bullwhip cracking, horseback riding, mule team handling, firing frontier firearms, blacksmithing, and assembling (and disassembling) covered wagons.

While "feminizing" the male western was nothing new, Westward the Women went a step deeper than most, one of the few films to present positive, overt Sisterhood. It is almost a casebook of traditional attitudes toward women to be refuted. In other words, while the female characters may be spoken to or treated derisively, the audience sees them in a positive light, and even heroically. 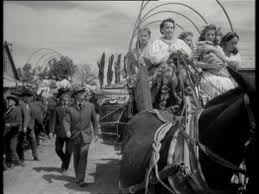 For instance, there are images of the women growing comfortable facing tough tasks, working together to fix a wagon and fight off Indians. Their bravery could not be clearer, as the audience sees dramatic images of individual women against an open and stark landscape and sky—a deliberate filming technique.

When a woman's version of a male genre is created, the woman's world—primarily love and romance, marriage, sex, rape, and childbirth—must be reconciled in some manner with the male movie.

By the end of this film, the women "have been told they can't cope, can't shoot, can't rope, can't ride, can't fight, and can't endure, and they have proved this to be wrong every time. These 'masculine' things are now absorbed into them.

This movie touched me because it was a female-driven tale—that of women banding together to form a sisterhood against harsh odds.