A Widow's Cause: Bringing Thanksgiving to Victorian America by Jo-Ann Roberts 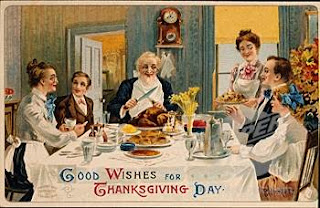 During most of the 19th century, Thanksgiving was not an official holiday. Admittedly, it had its roots in the New England states, and was widely celebrated there and into the mid-West. The actual date of the holiday was left to individual states and territories. It could vary widely from September through December, but mostly celebrated in November after the harvest.
While the idea of celebrating a good harvest was an old one, it took a Victorian lady to give it its voice. Specifically, the editor of a highly popular magazine of the times, Godey's Lady's Book, Sarah Josepha Hale. 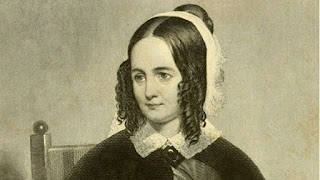 Suddenly finding herself a widow and single mother with children to support--including a brand-new baby--Sarah wrote a book, Northwood. Its success led to a job offer for the "editorship" of a new "ladies" magazine, turning Godey's into one of the most important periodicals in 19th century America. Though it is now remembered primarily for its fashion plates, crafts, and household tidbits, it covered social issues as well.
Year after year, Godey's Lady's Book published the same plea. Each year the campaign brought new success. By 1851, 29 out of 31 states celebrated a day of Thanksgiving. However, not on the same day so she continued to insist the holiday be celebrated on the exact same day.
Having thoroughly thought it out, she suggested the last Thursday in November so that "the telegraph of human happiness would move every heart to gladness simultaneously." To further her cause for a unified day of giving thanks, she pointed out that farm labor was done for the season and the election cycle was over.
Below is the cover of Godey's Lady's Book and the original plea from 1847. 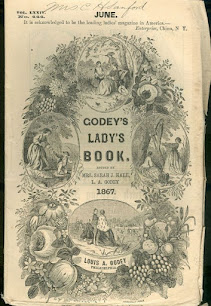 “OUR HOLIDAYS.—We have but two that we can call entirely national. The New Year is a holiday to all the world, and Christmas to all Christians—but the “Fourth of July” and “Thanksgiving Day” can only be enjoyed by Americans. The annual observance of Thanksgiving Day was, to be sure, mostly confined to the New England States, till within a few years. We are glad to see that this good old puritan custom is becoming popular through the Union…Would that the next Thanksgiving might be observed in all the states on the same day. Then, though the members of the same family might be too far separated to meet around one festival board, they would have the gratification of knowing that all were enjoying the blessing of the day…

Despite her claims, she had not achieved the ultimate endorsement; a proclamation from the President. In 1861, with civil war looming, she focused on national unity as her strongest selling point.
Finally, under these conditions and the stress of considerable loss of life, a devastated Southern economy, and public support for the holiday, President Abraham Lincoln endorsed and proclaimed "a day of Thanksgiving and Praise to our beneficent Father who dwelt in the heavens." Furthermore, he stated, Americans should "fervently implore" blessings from the Almighty to "heal the wounds of the nations, and to restore it...to the full enjoyment of peace, harmony, tranquility and union." 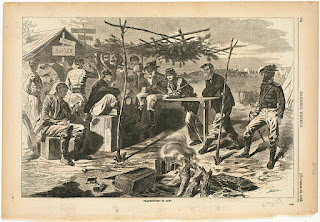 Thanksgiving in a Civil War camp
Successive presidents continued the tradition and proclaimed a yearly Thanksgiving at the end of every November.  Still not satisfied, Hale's magazine urged Congress to recognize the holiday. Unfortunately, she didn't live to see the Congressional proclamation of the Thanksgiving story (which finally took place in 1941), but by the 1870's Thanksgiving was already a part of America's culture.
The national holiday has become just what Sarah Josepha Hale envisioned: a celebration of home and hearth and the blessings for which we are grateful.
Happy Thanksgiving!
Sources:
Read the Original Pitch for Thanksgiving, From the Editress Who Created the Holiday - Atlas Obscura
http://www.thisvictorianlife.com/blog/thanksgiving
Posted by Jo-Ann Roberts at 11/16/2021