The Crash at Crush by Bea Tifton 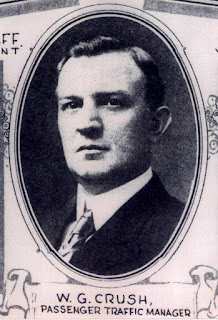 A publicity stunt in Texas went terribly wrong on September 15, 1896. The general passenger agent for the Missouri-Kansas-Texas Railroad, William Crush, had a brainstorm to increase ticket sales. He proposed that the company stage a train wreck. The railroad had recently replaced its 30 ton engines with newer 60 ton engines. Two of the surplus 30 ton engines could be used in the crash.

A similar stunt had been executed near Columbus, Ohio on May 30, 1896 with great success.

Even though the Columbus and Hocking Valley Railroad didn’t charge an admission fee, passengers buying tickets to and from the crash site resulted in a big profit for the railroad.

The event took place 14 miles north of Waco and three miles south of the town of West.  In preparation, the railroad had two water wells drilled and erected a Ringling Brothers Circus tent. They built a grandstand, three speakers’ stands, a platform for reporters, two telegraph offices, and a train depot with a huge sign that designated the spot as Crush, Texas.  So that there was no chance of a collision on the main tracks, four miles of a separate track were built for the collision. 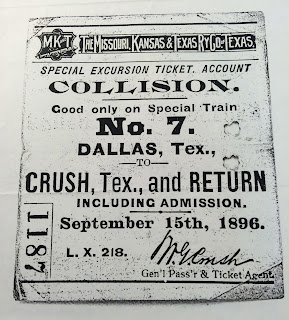 As a safety precaution, the railroad engineers conducted a speed test to determine the point

of collision. The engineers told Crush that his idea was safe because the train boilers on the steam engines were not likely to explode even on a high speed crash because they were specifically designed to resist ruptures. 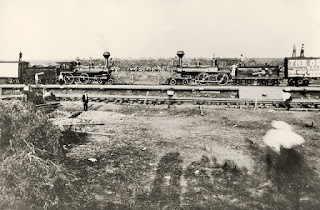 At 5:00 p.m. the trains rolled out for photographs. Crush gave the signal and the engineers and crew started the trains and then jumped off. The engines rumbled toward each other emitting whistles as they went. Torpedos had been placed on the track so they exploded constantly as the trains rode over them. Each train was going 45 miles per hour when the engines collided.

There was a large explosion and debris flew everywhere. The crowd panicked as people began to run in every direction. Some people ran to grab the wooden remains on the track as souvenirs. One photographer from Waco lost his eye and two people were killed while six others were seriously injured. 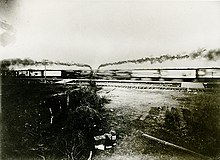 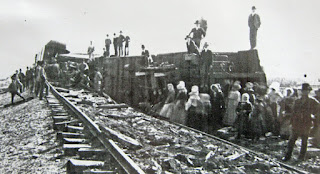 Stories of the collision and subsequent explosion made headlines all over the country. Crush was fired and rehired the next day. He went on to work for the railroad before he retired after sixty years with the company. The railroad settled lawsuits  filed by the victims’ families and the photographer. Several train collisions by other railroads were conducted for years to come.

The Texas born ragtime musician Scott Joplin was performing near Crush at the time of the collision and was so struck by the event that he composed the “Great Crush Collision March” and dedicated it to the Missouri-Kansas-Railroad.

To listen to the composition:
https://www.youtube.com/watch?v=Tp_k5Li3C-Y
Source:
Wikipedia "Crash at Crush"
Posted by Bea Tifton at 11/12/2021