LIFE IN A SOD HOUSE

Researching for the books I write leads me down interesting rabbit holes. I can’t resist learning more about the Old West. Sod homes fascinate me, even as the idea is repugnant. Without trees or stone to build with, settlers had to rely on the only available building material — prairie sod. Sod is the top layer of earth that includes grass, its roots, and the dirt clinging to the roots. Building a sod house might take weeks.

Imagine the moldy scent and the impossibility of preventing bugs and other pests. Yet a sod home is better than living in a covered wagon, a tent, or camping in the elements. Probably.

In 1862 the U.S. Congress passed the Homestead Act. This law permitted any 21-year-old citizen or immigrant with the intention of becoming a citizen to lay claim to 160 acres of land in what was known as the Great American Prairie. People came from all over the world to take advantage of this opportunity. By 1900 over 600,000 claims had been filed.

The homesteaders faced many challenges. Everything about the prairie was extreme. The land was flat and treeless and the sky seemed to go on forever. Can you imagine looking at a tall-grass prairie where the grass sometimes grew to be more than 6 feet tall? It is said that riders on horseback could pick wildflowers without dismounting. Women worried about their children getting hopelessly lost in the grass. I can’t visualize cutting through that grass to build a sod house.

Summer brought endless days of heat, periods of drought, rainstorms, tornadoes, swarms of grasshoppers that could destroy fields of crops, and never-ending wind.

Some things about modern houses are consistent: indoor plumbing, electricity, air-conditioning, central heating, plus windows and doors that seal. This list is of things that are important to me and probably to you. Consider pioneers who moved west and made a home from whatever the land offered.

Paintings of pioneers usually show early settlers living in a log cabin. Growing up, I lived in the high plains of West Texas. Although the plains look flat, there are ravines and canyons carving through them. Cottonwood and other trees grew in varying numbers in the canyons where they had access to water. In general, though, there were no trees for building homes. 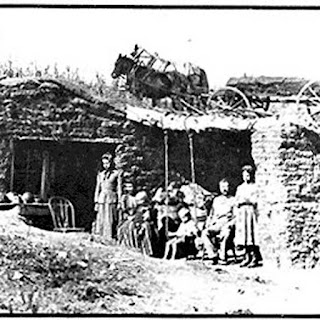 Family in front of their home,
horses and wagon on top

The first Anglos to settle in America’s massive Great Plains would have had to live in tents, covered wagons, or sod houses. I’ve seen sod houses, or soddies, in living history museums like the impressive Ranching Heritage Museum at Texas Tech University in Lubbock. Yet, I’ve never seen a sod home in which someone was living. From what I’ve researched, there were numerous problems. Imagine eating dinner and having a snake drop onto the table.

Let’s suppose you’re a newly arrived settler looking for land. You’d search for a stream or creek and small rolling hills which served as windbreaks. Access to planned railroad lines was also an asset because it made it easier to ship goods and livestock to market. As an immigrant, you might not speak English well enough to discover information about railroads. Once you selected your land, you’d go to the Land Office to make sure no one else had filed on the site and to file your claim.

You’d be told (although you’d probably already know) a requirements for fulfilling the claim was building a dwelling to live in within six months. The land wouldn’t be yours for five years. Choosing the right site for a house was nearly as important as choosing the right claim. Building next to a small hill provided some protection from the constant wind. Being near a stream meant easy access to water, but building too close made flooding a danger. 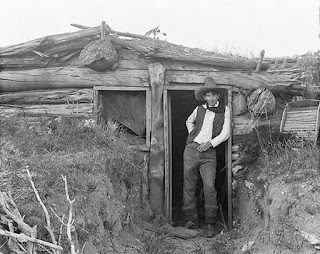 Texas soddie - I love this photo.

There are several types of sod houses. Because tents or the top of a covered wagon provided little comfort or shelter from the prairie's wild weather, many settlers began by building dugouts—the fastest choice. A family might dig into the side of a hill so that the hill formed the roof and part of three sides. This type dugout produced a small, dark space that could be made quickly and was warmer and drier than a tent.  Many people then built a sod house right in front of the dugout and used the dugout as another room.

A second soddie type was the half-dugout. A family might excavate down about four feet and build four feet up from that to form the half-dugout. This required support for the roof, a difficult problem to solve. Various solutions involved brush and twigs over cedar poles—which would leak in wet weather. Tin provided a better solution if there was a way to obtain the tin and fasten it to the soddie.

Less frequently, the entire home could be built of sod bricks, but with all four sides in the open. Again, this presented the problem of support for the roof. 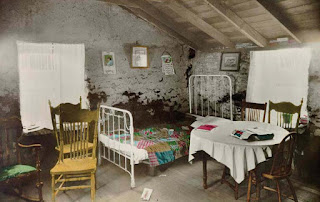 Inside with a whitewashed interior

Think about the difficulty of cutting sod. Farmers in the 1800s used mules, oxen or horses, and special plows equipped with curved steel blades to cut through the sod’s tough roots. Supposedly, the roots were so tough that as the plow cut through the sod, a loud tearing sound was created.

Farmers soon learned that they should only cut as much sod as they planned to use in one day. Sod quickly dried, cracked, and crumbled if not used immediately. Most farmers cut sod from the area where they planned to build their house. Doing so provided a flat surface on which to build and helped protect the house from prairie fires. Removing the grass from the area also helped keep insects, snakes, and vermin from burrowing into the house. 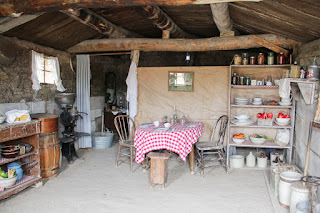 Interior of sod house with a window.
Imagine how dark it would be without
that window.

Freshly cut sod bricks were laid root-side up in order for the roots to continue to grow into the brick above it. Over time, the bricks in fact grew together to form a very strong wall. Amazing, isn't it?

Most modern houses in the United States are built straight up and down, with angled roofs, and brick or wooden exterior walls that keep out the rain and other elements. Sod houses, however, required a thick, wide foundation. The walls sloped down on the outside of the house so that as the walls settled, they would not collapse. The top of the house looked smaller than the bottom.

Some soddies were lined with cheesecloth to prevent uninvited guests from literally dropping in. I’ve read tales of people watching bugs crawl inside the cheesecloth. Even if the settlers were tolerant of what shared their home, I suspect there were many events of this type that today’s dwellers would find unbearable. (Like a snake dropping out of the ceiling.)

Folks occasionally whitewashed the inside of the soddie to limit falling dust and brighten the interior. The whitewash was made primarily of slaked lime and chalk. Many people (like me) were allergic to the substance.

People with allergies probably didn’t last long in that environment. One of the stories from my ancestors includes that of an asthmatic boy who developed pneumonia from the soddie’s interior smells of mold, smoke, and other irritants. His parents had to move him into a tent just outside the sod house. He survived in spite of his illness and the winter weather. Before the next winter, the father built a frame home and united the family under one roof. There's a theory that Laura Ingalls Wilder and her husband were victims of mold. 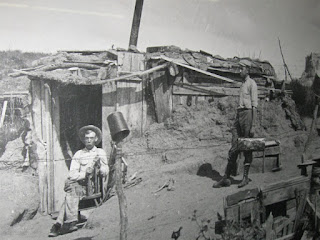 Weather permitting, you'd likely spend a lot of
time outside the dugout or soddie.

The elaborateness of the sod home varied due to the builders. Some were made of sod formed into precise bricks and constructed into a stable structure. Others were slap-dash to create shelter. I think of sod homes as a product of the American west, but one photo showed a more elaborate sod home in Europe. Other photos indicated poor Dutch and Belgium residents lived in houses made of sod. 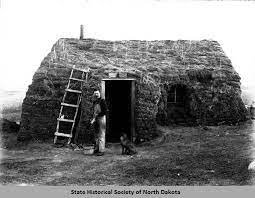 Note the sloping sides for stability.

In spite of my personal bias against them, I have read accounts stating they were cool in summer and snug in winter. Compared to hastily thrown up wooden homes, perhaps they were more comfortable, especially in winter. They were good shelter from the wild prairie weather. The fact that they were basically made of dirt made them virtually fireproof. Walls of many rapidly constructed buildings consisted of only a thin wooden wall with no weatherproofing and poorly crafted joints.

A friend told of her great-grandmother Jane living in a sod home cut into the side of a rise. While Jane’s sons and husband were working in the field, two bulls got into a fight on the roof. Dust drifted down into the home and she feared the animals would fall through. They didn’t, but that must have been a terrifying event for a woman with two small girls to protect. In fact, being an early settler must have been an ordeal that required grit and resourcefulness every day. 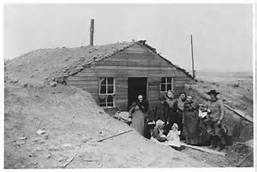 A family in front of their part dugout home.
The requirement for fulfilling the terms of the claim agreement varied for different types of claims. Whether it meant building a structure to live in within six months; raising successful crops and staying for five years; planting a certain number of acres of trees; or purchasing the land from the government - less than 50% of the homesteaders succeeded. Bad weather, illness, an accident, or loneliness could bring a homesteader's dream of land ownership to a bitter end. Those who failed went back home or continued moving west.

I don’t know how you feel, but I’m grateful for my home. The weather outside is hot today, but here at the computer in my office, I’m cool and comfortable. Electricity provides for the climate controlled interior, the computer, and the music playing while I write. Hero brought me a Cherry Dr Pepper in my favorite glass (you see one of the reasons I call him Hero). I positively love writing and reading about the Old West, but I’m glad I live today instead of then.

Caroline Clemmons is an award winning bestselling author. Her latest release is THEODOSIA, A Proxy Mail-Order Bride, available here from Amazon and enrolled in Kindle Unlimited. Check out her Amazon author page and her website at http://www.carolineclemmons.com Sign up for her newsletter here and receive a FREE western historical romance novella, HAPPY IS THE BRIDE.
Posted by Caroline Clemmons at 8/26/2021