Mercantiles - Hubbubs of the Old West 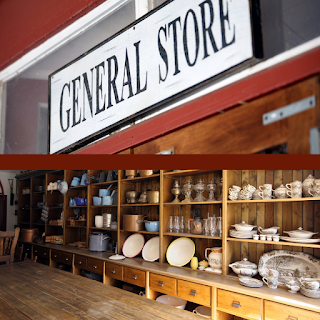 I remember as a young girl riding my bike with my best friend to the market only a couple of blocks from my house and choosing a candy bar. I didn't pay much attention to any other items for sale, but I vaguely remember my mother going inside for basic items like cereal, canned soup, and a gallon of milk when we needed it and didn't have time or the need to travel the extra fifteen minutes into the next town where a real grocery store (or two) were located. It was nice to have that convenient store even though it wasn't anything close to the convenience stores of today. We could even fill our cars up with gas there.

The place has since shut down, but as I've written historical western fiction over the past few years, I've realized just how important the mercantile or general store was to a town in the 1800s, and not even to the Old West, though it certainly plays a role in most historical western fiction, but in small towns all across America during the 19th century and into the next. Why were general stores so important? Often, the post office was located inside. Also, people came to hang out or chat, read the newspaper, or maybe play a game of checkers. And since most families lived in outlying areas which lacked decent roads, and more often than not, money was scarce and they only went to the store to buy necessities, "going to town" was a big deal. Even I remember how special shopping with my mother or "going to town" was, because growing up, we only did that sort of thing on Saturdays.

What could you buy at a mercantile or general store in the days of the Old West or just after the Civil War when many farms in the South had been ravaged and there was nothing to eat? Anything and everything, it seems, from your favorite brand of hair pomade to dried beans, live chickens or eggs that a farm wife may have traded in, or pickled herring. Horse tack and whips usually hung from the rafters, and at Christmastime, special toys were included among the proprietor's wares. Penny candy such as peppermint sticks or lemon drops were kept in stock year-round, however.

General stores were the place to go to purchase fabric and other sewing notions. You could also purchase men's hats, coffee kettles and other cookware, soaps and other personal hygiene products, medicines, spices and other staples, and much more. After a while, the Montgomery Ward catalog, followed by the Sears catalog, began to encourage shoppers to order specialty items. This, along with improvements in roads and modes of transportation, led to a decline in general stores. Who knows? Perhaps the invention of the telephone also contributed as people no longer needed to walk or ride into town to speak to one another.

A few general stores still exist today, however. I found this article on the Taste of Home website both interesting and informative. I love the pictures of the old buildings and think it's wonderful they still exist. In the next town over from where I live, and where my father was raised, my grandmother's brother owned a general store. I can't remember how many years he ran the store, but here is a picture of his obituary when he passed away in 1979. The building no longer exists, but what a wonderful place it must have been! 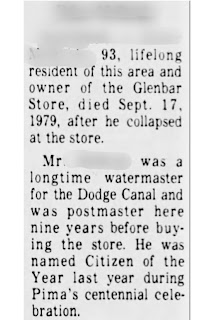 The mercantile plays a prominent role in some of the books in my Brides of Hope Hollow series. I'm preparing to write book 5, Hope in Her Heart, but I'm also writing a prequel to the series called Abiding Hope about a woman who gets stranded in Hope Hollow, Oregon, while traveling from San Francisco to Seattle. With her money gone, and the clothing she's wearing as her only provisions, the mercantile and its owners, the Watsons, come to the rescue once again. This prequel will be available as a free download when subscribing to my newsletter. I'll share the link to download the story next month. In the meantime, here is a picture of the cover as well as a link to follow where you can put together a jigsaw puzzle. Enjoy! 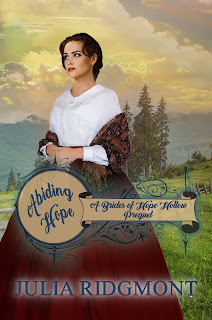