VALENTINE'S DAY IN THE 19TH CENTURY

Valentine Day was celebrated in the 19th century with parties, balls, (including bachelor balls), and by sending valentine cards. 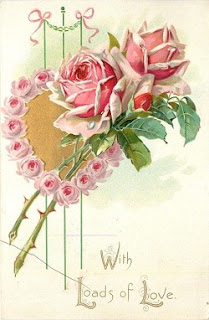 Mother of the American Valentine
The tradition of valentine cards in the US began with The Mother of the American Valentine, Esther Howland of Worchester Massachusetts, when she received a valentine from a friend in England in 1849. It was bordered in lace paper and colorful cut flowers were pasted on it. A small pocket of green paper in the middle held a small red-edged note of Valentine Day sentiments. She loved it, but she also thought she could make a better one. Esther created a dozen designs she gave to her brother to use as samples to try to get orders for them on the sales trip he made for their family stationery business. He returned with five thousand dollars’ worth of orders for valentines.

Esther needed a lot of help to make all those cards, so she called her friends over and they worked like a team. One cut out the pictures her father purchased from the only lithographer in the country, another created the backgrounds for the valentines, one wrote the messages, and so on. Each friend did some sort of work on them until all the orders were completed. The next year the orders for valentines more than doubled. Esther hired lots of women to make the cards and Worcester, Massachusetts became the center of the budding American Valentine Day business.

Nineteenth-century valentine cards were more than sweet words and lovely pictures. People touched, held, and interacted with them due to the elaborate assembly of sumptuous textures and interactive features, such as flaps that lifted revealing hidden romanticisms like "Be Mine". So, the feelings evoked in the recipients from the loving sentiments of the cards were heightened even more from touching and feeling the materials.
An essential trait of valentine cards was that they were made to be significantly handled by the receiver. In the mid-nineteenth century, valentine cards invited multiple interactions from the people they were given to. Some had pull levers or strings that revealed hidden images. Others were much more intricate, like the Beehive valentines that you'd pull out and extend to uncover a romantic image beneath. More complex than simply lifting a flap to reveal a picture, the webbing of the cut paper compelled the receiver to move around to look at the image and peer through the spaces in the paper, similar to the way perforated paper lace partially blocked images on other types of valentines.

During the Civil War people weren’t able to exchange cards that much but when it ended in 1865, the popularity of valentine cards surged. That year, New Yorkers mailed over 66,000 valentines and more than 86,000 in 1866. The valentine card tradition had blossomed into a lucrative commercial industry.

Whitney Valentines
In 1881, Esther had to take care of her sick father full time, and to do so she had to sell her business to an associate, Stationer George C. Whitney, also in Worcester, Massachusetts. Whitney designed many of his company's cards based on Esther's model.

During the 1880s lots of articles were publicized about the Whitney Manufacturing Company’s valentine-making process, including:

·       The use of German scrap and English embossed paper
·       The skills of their young female card makers.
·       How the valentines were sold and distributed by salesmen going from town to town taking orders from shop owners
·       And about Whitney’s seasonal shops, which allowed customers to buy directly.

And, here is an expert of a February 1867 New York Times article about how exorbitantly expensive some of the valentine cards were, revealing that the costliest held hidden treasures within.

"Valentines of this class are not simply combinations of paper gorgeously gilded, carefully embossed and elaborately laced. To be sure they show paper lovers seated in paper grottoes, under paper roses, ambushed by paper cupids, and indulging in the luxury of paper kisses; but they also show something more attractive than these paper delights to the overjoyed receiver. Receptacles cunningly prepared may hide watches or other jewelry, and, of course, there is no limit to the lengths to which wealthy and foolish lovers may go."

However, for the Whitney factory workers who assembled the valentines by hand (all of the assemblers were women) it was hard work, and seasonal only. They were paid by the piece and made about $12.00 a week. Here is an excerpt from one of the employees, Marion Owens—Valentine Maker, in her own words. She worked on the 4th floor of the George C. Whitney building in 1895.

“When I was hired, they only trained me for half an hour. A woman showed me what to do--how to cut out tags which were all different sizes, how to put the cards in the envelope so that the face of the card showed through the little cellophane window--and then I just had to work my fingers until they got used to it.”

Other Popular Valentine Cards
Kate Greenaway the legendary British illustrator of children’s books designed valentines in the late 1800s which were enormously popular. Some of Greenaway’s illustrations for valentine cards were collected in a book published in 1876, "Quiver of Love: A Collection of Valentines." 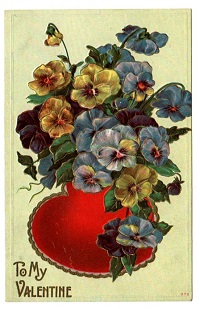 Most Valentines were reasonably priced and created for a large, broad audience. In fact, for several years in the late 1800's humorous valentines, intended as jokes, were popular. Among these satirical valentines, vinegar valentines were a favorite—offering a socially acceptable way to criticize, insult, and reject certain types of people.

Valentine Candy
Richard Cadbury invented the first Valentine's Day candy box in 1861 in England. In America, in 1907, Milton Hershey launched tear-dropped shaped “kisses,” so-called because of the smooching noise the chocolate made.  In 1866, Daniel Chase the brother of Oliver Chase, the creator of NECCO wafers figured out how to print words on candy.  People loved his conversation candies with witty romantic messages, but they weren’t available in heart shapes until 1902. 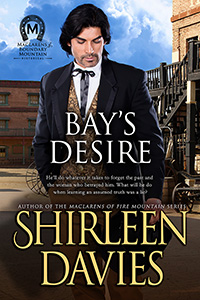