My western romance Gambling with Love is set in 1883 in Denver, Colorado against the backdrop of a high-stakes poker tournament. The heroine, Lainie Conrad, is a professional poker player seeking revenge against the gambler responsible for her husband's murder. Her plans for revenge are compromised when U.S. Deputy Marshal Nick Foster shows up to arrest and escort her back east to stand trial for suspected murder.

While I grew up in a card-playing family, I've never played much poker, although I'm comfortable with a "friendly" game now and then. So, in order to write the grand tournament poker scene in Gambling with Love with historical accuracy, I needed to refresh my memory with the basic rules and etiquette and also  research the history of cards and poker to put it into historical context. I was not disappointed in the plethora of websites, blogs, and books on both topics.**

Here's where I started:
The Joker has a paradoxical appeal because it carries special properties as the Imperial Trump or Wild Card and, in that role, can resolve problems and win “tricks”. The Joker is as powerful as it is insignificant. It can represent any card and yet it represents nothing without a purposeful designation.

Taking the trivia-history of poker a bit farther...

Poker’s hazy origins are of some debate among those who study this sort of thing. There are arguments supporting its creation in the ancient Orient to the game evolving as a pirate’s pastime. However, there is some agreement that poker’s historical roots reach back to a French card game of vying, bluffing, and betting called “Poque” in which one said Je poque to open the betting.

In America, Poque dates back to the French settlers of early 1800s New Orleans. As the game of poker spread northwards along the Mississippi River, it followed the expansion of the American frontier with the rush to the California gold fields in 1849 and later with the further opening of the west after the Civil War. “Brag”, a three-card British betting card game with a drawing component, influenced the rules of Poque and the “draw” was incorporated into the game. By the mid-1800s, the game was known by its American name, Poker, and was increasingly played with all 52 cards to allow for more players. The term “Draw Poker” was first recorded c. 1850.


According to the Hoyle 1854 edition, these were the accepted hands:
Apparently, Draw and Stud Poker rules appeared for the first time in the card games rule book, The American Hoyle, in the 1875 edition. The 1887 edition noted that four of a kind was the best hand when straights were not played. Interestingly enough, for many years, straights were not generally accepted poker hands.

Hoyle’s rules stated that when a straight and a flush came together, it outranked a full house, but not fours. Until the 1890s, the highest possible hand was four Aces or four Kings with an Ace kicker (a.k.a. wild card, imperial trump or “cuter”). Not only was this hand unbeatable, it could not be tied.

Obviously, the player holding four kings and an ace couldn’t be beaten, however, a ‘cuter’ was a specific type of wild card in that it often bore a dangerously close resemblance to the ace of spades. More than one old west legend sprang up about gamblers losing high stakes pots to this clever imposter when they erroneously thought they held all four aces.

I incorporated a ‘cuter’, aka imperial trump, into the big poker game as a devious little plot twist in Gambling with Love to keep the players on their toes.

**To read more about the history poker in the American Old West, refer to the Time-Life Books series on The Old West, specifically the volume devoted to “The Gamblers” or visit the Internet sources devoted to the game of poker, which are too numerous to list here. 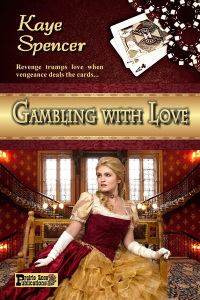 Kaye Spencer
Writing through history one romance upon a time

As I don’t send a newsletter, perhaps you would consider following me on these platforms: