Every year, I head out on day long road trip that takes me through northern New Mexico or southern Colorado. Both areas are rich with old west history. A few years ago, I took a drive through northern New Mexico to see the spectacular rock cliffs called the Palisades Sill in the Cimarron River Canyon between Cimarron and Taos. It is a lovely, slow drive. If you take an autumnal drive, you will likely see the beautiful colors of the Aspen leaves as they change colors.


I consider Trinidad, Colorado to be the starting point for this drive even though I live two hours to the east. So from Trinidad, head south over Raton Pass then bear to the southwest past the National Rifle Association’s affiliate site, the Wittington Center, and keep going to Cimarron, New Mexico and then head westerly through the mountains to Taos. The narrow, winding, two-lane paved road of 60 miles from Cimarron to Taos roughly follows the Cimarron River through the Cimarron River Canyon, and the drive will take you around an hour and a half.
From Cimarron, you’ll begin the ascent toward Taos through the Cimarron River Canyon. You’ll soon find yourself in Cimarron Canyon State Park and, in just a few miles, you'll come to a breathtaking view of a rough and ragged line of rock cliffs called the Palisades Sill.

These cliffs were cut by the Cimarron River some 40 million years ago during the era of uplifting in the southern Rocky Mountains. The rock is igneous known as sill. Here is a quote from the New Mexico Bureau of Geology and Mineral Resources website -http://geoinfo.nmt.edu/tour/state/cimarron/home.html


Cimarron is Spanish for wild and untamed and originally was used in New Mexico to refer to the wild bighorn sheep, and later to the wild horses and cattle that once roamed throughout the north-central mountains. Today, the sparsely populated Cimarron country in western Colfax County can still be described as wild and untamed with its rugged, timbered mountains (the Cimarron Range), towering cliffs, and the previously unpredictable Cimarron River. The Cimarron River has been tamed somewhat by the Eagle Nest Dam, which controls flooding in the canyon. 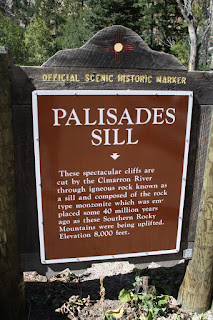 Many an outlaw and gold-seeker made their way over the this rough and dangerous mountain trail from Cimarron to Taos. In my book, The Gunfighter’s Woman, I sent former gunfighter Matt Caddock over this route when he left the Stirling Ranch near Trinchera, Colorado as his quickest way to reach Taos, New Mexico. He returned to an old church in Taos where he hoped to find clues that would lead him to gold buried near the Spanish Peaks of southern Colorado.


Here is an excerpt from The Gunfighter’s Woman.

Matt Caddock was a man with a simple plan—find the gold and return to Brenna by the first snow at the ranch. He didn’t have much time. No more than a month, if that. Too bad simple plans weren’t necessarily the easiest.

Riding under a promise of a cool evening, his arrival in Taos turned no heads. He was just a stranger going somewhere, but headed nowhere. Skirting the edge of the quiet adobe town, he circled wide around the ruins of the old San Geronimo Church and graveyards until he reached the back of the Nuestra Señora de Guadalupe parish.

Looping the horse’s reins around a short post, he gave him a pat and a promise he’d return soon, then he walked along the adobe wall to the courtyard gate, his gaze scanning the street, buildings, and passersby.At the church door, he paused, glanced around, then stepped into the cool tranquility inside the church and removed his hat. He lingered at the side of the doorway, letting his eyes adjust to the change in light while getting his bearings. The floor fell away in a gentle slope to the front where candles burned and a shadowed cross hung high on the far wall.

Movement, and a barely audible scraping—like a footstep— caught his ear, and he expected a priest or a parishioner to greet him…but no one appeared. Chalking it up to a mouse scurrying about, Matt walked up the narrow aisle to the first pew where he’d sat beside Henry on that long ago day in his seventeen-year-old life. He took the same place on the wooden pew where he’d sat with Henry, and gazed at the serene white figure of the Lady of Guadalupe nestled into her protective alcove carved into the two-foot-thick adobe wall not five feet in front of him.

He had dim recollections of going to church a couple of times a year with his parents, but never again after his ma died. The only other time he’d been in a church was with Henry here.

He was uncomfortable in a church, because he didn’t know what to do. When he’d voiced his misgivings, Henry had explained a church was a place to think. You didn’t have to pray if you didn’t want to. So that’s what he’d done. He’d thought.

He’d wondered about his future as much as he questioned why his parents had died and left him a penniless orphan. There seemed no point to anything in his life with the aimless drifting from job-to-job and town-to-town with Henry. Together, all they owned was a pocket full of nothing. Granted, they had clothes on their backs and food in their bellies, but wasn’t there more out there…somewhere?

Guilt stinging his conscience for those ungrateful thoughts, he’d peeked at Henry. His eyes were closed and his chin rested on his chest. 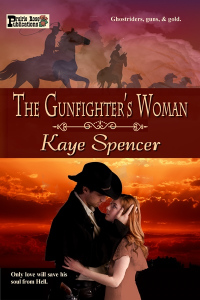 The Gunfighter's Woman is available on Amazon.com: HERE

Writing through history one romance upon a time

My apologies for the weirdness of the different fonts and font sizes in the article. Blogger was not playing nicely when I wrote this. ;-)