The Children’s Aid Society was founded in 1853 by a small group of clergymen and social reformers concerned about the general conditions of homeless, neglected, and delinquent children. One of the principals of this group was a 26-year old Congregational minister, Rev. Charles Loring Brace. He had been working as an assistant minister in the Five Points Mission, located in one of the most impoverished neighborhoods of the city. He also occasionally visited the New York City Almshouse on Blackwell’s Island, further exposing him to the degrading and dehumanizing conditions prevalent in large sections of the city.

Rev. Brace, a Yale College graduate, was selected to become the first Secretary/Director of the Children’s Aid Society. Rev. Brace knew that American pioneers could use help settling the American West and arranged to send orphaned children to them. This became known as the Orphan Train Movement. Many people think of the orphan trains as the beginning of the modern foster care system.

Between 1854 and 1929, an estimated 200,000 orphaned, abandoned, and runaway children in the East were sent via trains to Midwestern farming communities. The first group of children went to Dowagiac, Michigan in 1854. The last official train ran to Texas in 1929.

Children were taken in small groups of 10 to 40, under the supervision of at least one western agent, traveled on trains to selected stops along the way, where they were taken by families in that area. Agents would plan a route, send flyers to towns along the way, and arrange for a screening committee in towns where the children might get new homes. The towns where they stopped, naturally, had to be along a railroad line. The screening committee was usually made up of a town doctor, clergyman, newspaper editor, store owner and/or teacher.

In the recent anthology UNDER A MULBERRY MOON, the novellas of Jacquie Rogers' A FAMILY FOR POLLY and my A FAMILY FOR MERRY deal with sisters who were adopted from the orphan train and later adopt their own children from an orphan train. Only 99 cents for a limited time! Amazon buy link: http://a.co/99Odsch

Can you fathom a child being sent to prison because he had no home? Imagine children living on the streets with no way to buy clothes or food and no safe place to sleep. Sadly, there are still such children in many places, especially large cities!

The National Center on Family Homelessness reports that one in every thirty children in the United States is homeless, for a staggering 2.5 million children each year in America. Of course, some of those are with their parents, but many are alone. Nevertheless, this one-in-thirty number shocks me!

Rev. Brace received financial support from New York businessmen and other philanthropists such as the Roosevelt, Astor, and Dodge families to ensure the physical and emotional well-being of children and provide them with the support needed to become successful adults. The only options available to the thousands of abandoned, abused, and orphaned children were begging, prostitution, thievery, and gang membership unless they were committed to jails, almshouses, or orphanages. Rev. Brace believed that institutional care stunted and destroyed children. (I certainly agree that being sent to prison for being homeless is not the right solution!) His opinion was that only work, education, and a strong family life could help them develop into self-reliant citizens.

The history of the railroads is deeply tied to the history of the Orphan Trains Era in America. Railroads were the most inexpensive way to move children westward from poverty filled homes, orphanages, poor houses, and off the streets. In the West and Mid-west, Rev. Brace believed, solid, God-fearing homes could be found for the children. Food would be plentiful with pure air to breathe and a good work ethnic developed by living on a farm would help them to grow into mature responsible adults able to care for themselves. 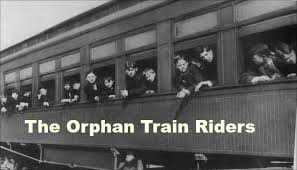 One of the things I found upsetting is that siblings were often split up, never to be reunited—something I believe occasionally happens today in foster care. A child’s last name was often changed and that meant the chance of contacting a sibling later was almost impossible. 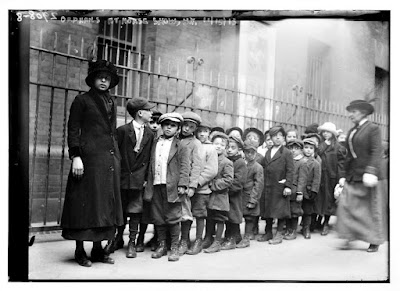 When it began, the program was quite controversial. Since this was before the Civil War, abolitionists viewed it as a form of slavery, which for some failures it was. Pro-slavery advocates saw it as part of the abolitionist movement because the labor provided by children made slaves unnecessary.

Since a significant percentage of poor children in Manhattan were Irish Catholic and would be raised outside their faith once transported, some Catholics called the program anti-Catholic. In response, the Archdiocese of New York upgraded their  child-welfare programs. They improved their parochial school system and built more Catholic orphanages. In addition, they created a 114-acre training center on farmland in the Bronx which they called the Catholic Protectory.

The Children’s Aid Society included in their first annual report: “We have thus far sent off to homes in the country, or to places where they could earn an honest living, 164 boys and 43 girls, of whom some 20 were taken from prison, where they had been placed for being homeless on the streets. The great majority were the children of poor or degraded people, who were leaving them to grow up neglected in the streets. They were found by our visitors at the turning point of their lives, and sent to friendly homes, where they would be removed from the overwhelming temptations which poverty and neglect certainly occasion in a great city. Of these 200 boys and girls, a great proportion are so many vagrants or criminals saved; so much expense lessened to courts and prisons; so much poisonous influence removed from the city; and so many boys and girls, worthy of something better from society than a felon’s fate, placed where they can enter on manhood or womanhood somewhat as God intended that they should.”
(Source: The Victor Remer Historical Archives of the Children’s Aid Society, Children’s Aid Society of New York City.)

Through a crazy twist of fate, Caroline Clemmons was not born on a Texas ranch. To make up for this tragic error, she writes about handsome cowboys, feisty ranch women, and scheming villains in a small office her family calls her pink cave. She and her Hero live in North Central Texas cowboy country where they ride herd on their rescued cats and dogs. The books she creates there have made her an Amazon bestselling author and won several awards. Check out her website and sign up for her monthly newsletter to receive a FREE western historical novella titled Happy Is The Bride. Find Caroline here:
Website http://carolineclemmons.com
Facebook http://Facebook.com/CarolineClemmonsRomances
Twitter http://Twitter.com/CarolinClemmons (no E in Caroline)


Sign up for her newsletter here and receive a FREE novella, HAPPY IS THE BRIDE. Newsletters are sent only when there is a new release or contest. No salesman will call.
Posted by Caroline Clemmons at 7/26/2018

Labels: A FAMILY FOR MERRY, A FAMILY FOR POLLY, Caroline Clemmons; Sweethearts of the West, Children's Aid Society, orphan train, Rev. Charles Brace, Under a Mulberry Moon
Email ThisBlogThis!Share to TwitterShare to FacebookShare to Pinterest