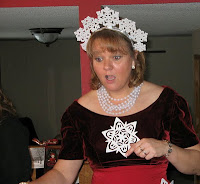 Hello, Lauri Robinson here, a new Sweethhearts of the West member. I write and read, and read, and read, historical westerns. That’s not to say I don’t read other genres, but put a pair of cowboy boots on the hero and I’m captured, lock, stock, and barrel until the last page even if it means I don’t shut off the light until the wee hours of the morning.
This is me—the snow princess at my granddaughter’s princess birthday party last year. Dressing up was NOT optional, and I believe this moment was captured as the punch bowl teetered and well,that's another story.
I write for Harlequin, Mills and Boon and The Wild Rose Press, and will have five books released in 2012 starting in January, but I’ll tell you more about them in another blog. Today it’s about Thanksgiving.

As many of us were taught, the first Thanksgiving took place in the fall 1621. It was a three day feast of thanks hosted by the Pilgrims and a local tribe of Wampanoag. Intermittent days of thanks continued for the next hundred and fifty years, often celebrating an event, good harvest, or end of a time period, such as a drought or battle.
In 1777, George Washington declared the last Thursday in November as a ‘national day of public thanksgiving and prayer’ which all thirteen colonies celebrated, particularly giving thanks for the new constitution of the newly formed nation. The next national day was declared in 1789, by then President George Washington. However, it still didn’t become a ‘yearly’ celebration, until 1863.
For over 40 years, Sara Josepha Hale, the author of Mary had a Little Lamb, advocated for an annual day of Thanksgiving, and during the Civil War while looking for a way to bring the nation together, President Abraham Lincoln consulted with Ms. Hale prior to issuing the Thanksgiving Proclamation that declared the last Thursday of November (based on Washington’s date) as a national holiday.
75 years later, in 1939 retailers begged President Franklin D. Roosevelt to change Thanksgiving to the second to the last Thursday of the month, therefore giving people more shopping days before Christmas. He did so, but the confusion didn’t settle well with the county. Calendars were off, schools vacations had to be rescheduled, and yes, even football games reorganized. Many believed the reason of the date change was not a fitting cause and controversy split the nation. 23 states agreed to change the date, and 23 states refused. Colorado and Texas chose to celebrate both days. Even though businesses reported no real direct change in shopping, the two Thanksgivings (with states choosing which to observe) continued until 1941 when congress passed a law declaring Thanksgiving as a national holiday that would occur on the fourth Thursday of November every year.
So, there you have it.
History and controversy aside, for me, Thanksgiving is all about family. We lost a very integral part of our family when my mother passed away in June, and Thanksgiving without her and her coleslaw, sweet potatoes, beet pickles and pumpkin pies is going to be bittersweet. Happiness will abound as we gather together for it always does, and sadness will enter in as we miss those we’ve lost while reminiscing of past Thanksgivings as we always do.  (This is hubby and me, my mother, our three sons, their wives and children (absent one sleeping baby and two step grandsons).

Thankfulness for all the blessing we continually receive will also be abundant as we celebrate the day. If I live to be a hundred, nothing will ever replace the sweetness of the word “Grandma!” I am thankful for so much, every day of my life—for living in a wonderful country, for freedom, for my right to worship God, for all the obvious and not to be taken lightly things which include my family, home, community, friends, vocation, my publishers and their belief in me, and especially the people who read and find delight in my books. Thanks for sharing this wonderful life with me.
My Thanksgiving wish is that each and every one of you has a blessed and beautiful holiday.
Posted by Lauri at 11/24/2011